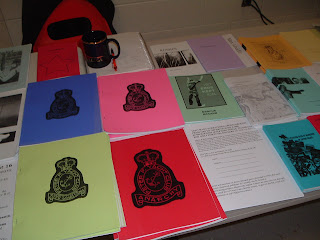 HAPPY CANADA DAY! Extremely cool to see Sandra Ridley and Gary Barwin share this year’s bpNichol chapbook award, after sharing a shortlist (the first time I’m aware of them producing a shortlist) with such as Daphne Marlatt, John Barlow and Andrew Faulkner. Here are some of the publications picked up at the recent small press fair (do you know about the one happening in Calgary this week?), perhaps one of the largest fairs in our fifteen year history. Obviously, I’ve started a second series of “12 or 20 questions” (here’s the link to the first one), but be sure to check the link regularly; not all the interviews are happening on this blog, so you might just miss some, otherwise.

Ottawa ON: One of the in/words group at Carleton University, poet Cameron Anstee, has certainly been doing some of the most interesting things out of that mix (along with Ben Ladouceur) over the past little bit, improving with each new piece I see, including this new chapbook, Releasing Symmetry (In/Words, January 2009). This little five page/five part poem extends itself, out, referencing a series of torn ligaments in his knee, over the course of years of soccer games (which he no longer plays). The further Anstee goes with his small, less-small, long, longer poems, the more interesting he becomes.

after the second surgery
a brace was made

plaster wrapped & cut away
& then a mould


the precedent of my left arm more definite
six weeks; no idea of months, or years

a thing measureable in days

Vancouver BC: From his home-base in Vancouver, former Ottawa resident Warren Fulton spent much of June travelling the country and celebrating fifteen years of his Pooka Press at events in Calgary, Toronto, Ottawa and Montreal, including an appearance at the small press fair, armed with a small array of new chapbooks and backlist, including cold lake poems (2007) by Calgary poet Laurie Fuhr, and the more recent Venus & Apollo (2009), by Vancouver poet Cath Morris. A member of the informal TADS writing group and a former Ottawa-area resident (she has work in an issue of ottawater), there are some good moments here and there in Morris’ poetry, but too often obscured; what she needs is a cut-throat editor, someone willing to do the slash-and-burn that her work needs, to bring out what shines. Morris is best when she is pared down to the bone, writing the least of what needs to be said, instead of the most. For all her talk of desire, it seems, desire is strongest when little, if even anything, is actually said.

The Dream of Self

Don’t take your
self
too seriously;
you’re just a passing illusion

no different than the
pink sky
that fades into blue

or the leaf
that flutters in the breeze
and then falls

a happy dream of nature
from which
you may never wake up.

Ottawa ON: It’s good to see Amanda Earl moving out into new projects, with another publication from her AngelHousePress, this one a follow-up to a previous collection of pieces from a small and informal poetry group she’s part of (at least two of which, Ridley and McCann, have been shortlisted for the Robert Kroetsch Award for Innovative Poetry through Montreal’s Snare Books), publishing the work of Sandra Ridley, Roland Prevost, Pearl Pirie, Marcus McCann and herself in the chapbook Pent Up (AngelHousePress, 2009). These are all poets that have been coming to the attention of Ottawa audiences over the past half decade, slowly working their way further. We’ve already seen what McCann can do with a first trade collection (and already he’s got people looking to see where else he might go, next), but when might we see what the rest of this group can accomplish through same?

wants there to be something about her. wants to know what it is. wants to be gentler. wants to not want so badly. wants to gasp audibly. wants to wake up in picton. wants a deeper sleep. wants to touch his lips again. wants days and days. wants dewfall. wants another downpour. wants to mail these postcards to her mother. wants forgiveness. what gall.

Ottawa ON: Their publications might come out rather irregularly (including their Dusty Owl Quarterly, which, for as much as I can tell, has yet to come out quarterly), but Dusty Owl, who manage a regular reading series at Swizzles on Queen Street, still manage to put out the occasional chapbook or two, including the most recent Dragon Verses (2009) by Roland Prevost, just in time for the fair.

His first chapbook, Metafizz (Bywords, 2007), came out as the direct result of his winning the previous year’s John Newlove Poetry Award, as judged by Erin Mouré. This new publication continues Prevost’s exploration into just what language can accomplish when condensed and twisted up, turned around itself into a combination of deliberate acts and accident. If Marcus McCann’s poetry works through a gymnastic sense of play, Prevost’s, by comparison, works a gymnastic sense of slow, methodical planning, deliberately mapping out each careful turn before moving, as well as evoking an element of nonsense, placed between sense.