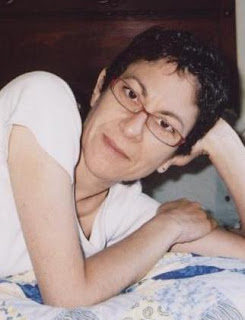 Ronna Bloom has published four books of poetry, most recently, Permiso, published by Pedlar Press in 2009. Her first book, Fear of the Ride (Carleton University Press, 1996) was shortlisted for the Gerald Lampert Award for best first book of poetry. The second, Personal Effects (Pedlar Press, 2000) was recorded by the Canadian National Institute for the Blind. Public Works (Pedlar Press, 2004) was shortlisted for the Pat Lowther Award. Ronna works as a teacher of poetry and prose writing and as a psychotherapist. Her poetry has been translated into Spanish and Bangla, and broadcast on CBC Radio. She has led writing workshops across Canada and abroad, and is currently Poet in Community at the University of Toronto.

The first book was hard to believe. A year or so after it came out, I went to read in another city and saw the host, who I’d never met, with a copy of it. I wanted to say, ‘how did you get that?’ It still felt very much an extension of me and not yet on its own.

The most recent book, Permiso, in some ways has more in common with the first than the others. I think it is quite direct and plainspoken. Yet it seems to speak more widely than the first. I listened for poems with the widest ear possible. Perhaps, that sounds flaky, but what I mean is that it was both absolutely personal and also absolutely not.

The process of revision changed a lot. I did almost no editing with the first one, mostly because I didn’t know how. Also the editor was very hands-off, which felt like a blessing to me at the time. With the next two books I began to learn how to revise. I described the editing of Public Works as “scouring.”

But with Permiso there was a different thing. A gentleness I didn’t know before. The manuscript lay on the other side of the bed for two years and I edited it by leafing through until the poem that fit what I was feeling came up. Or I’d read them out loud to whatever music I was listening to and go from there.

I have a hard time reading fiction. I stop after a paragraph and go off in a dream about it. I am suited to poetry: the direct hit.

I write poems in journals in among the lists and complaints and notes of the day. Sometimes I know it’s a poem immediately and sometimes, only later when I comb through the notebook I realize there’s a poem buried in there. Often I don’t know what the book is until well into it. There’s a hint, a theme, but it’s only after about three years and with the attuned ear and eye of my editor, Beth Follett, that I begin to see where it’s going and work with that.

Poems begin with a phrase or feeling. Often if I get the first line the rest just comes. In terms of the larger project, I usually write short pieces that begin to go together and talk to each other.

I love doing readings. I’m a big ham. The reading isn’t really part of the process. It’s another process. The reading is a performance, a chance to enter the language and feelings of the poem, fresh. I do it for myself and especially for those present. With Permiso, many of the poems had never been read before publication. So there’s a discovery of how the thing works in a room with people. A surprise.

(The first time I read in public I had these tiny poems and read them shyly. It was like there was some rule I wasn’t aware of that said ‘Don’t be too enthusiastic. Be cool.’ Someone from the back of the room yelled ‘louder.’ So I leaned into the microphone and said ‘hello?’ When I heard my voice in the microphone, I thought, ‘Oh. I like this!’ Then I thought to myself: ‘No one is ever going to read your poems the way you know how to read them.’ So I let it rip.)

I don’t think of theoretical concerns. At least not consciously. I suppose there are sometimes questions idling below the surface as in the ideas of private and public space that emerged in Public Works. But I’m very concrete, physical, image-making. I want to know ‘what is this that I’m seeing/feeling/hearing?’ Also, I’m beginning to trust that if I’m sensing it, maybe someone else is too. Is that a theory?

I think writers have different roles depending on who they are and what they’re drawn to. One day when I was wondering (perhaps worrying) about what I was doing in my writing a friend said to me: “Your job is to show people what insides look like.” I think, at the moment anyway, that’s what I do.

Essential. And good. But not just any editor. I have been lucky to work with Beth Follett, who is also the publisher of Pedlar Press. The process with her is almost collaborative. I lean on her mind and heart. We got drunk one night looking at Permiso and she told a joke that ended up in a poem. She is profoundly on the mark. I don’t know if I could do it without her.

Go where the energy is.

I wake up early -- too early -- 5am if I’m lucky. Eat a big breakfast: masses of tea, toast, and a million kinds of jam. That’s about the only routine of the day.

I write about not writing, or I read poetry that I love, or I watch television. And I try to stop trying.

12 - What did your favourite teacher teach you?

I’m a bit embarrassed because it’s so cliche but I’ve been a Natalie Goldberg fan of the ‘keep your hand moving and write about your obsessions’ variety. But others have said the same thing. We circle back to our themes. No avoiding them.

Permiso has a lot of music in it. The book began after the end of my marriage and music was more important then than I’d ever known. I especially wanted to listen to people singing to me in foreign languages. Their voices were the thing. But Neil Young and Leonard Cohen also broke and healed my heart over and over.

Having worked as a photographer, I rely on images alot. While I know sound naturally did come into my life more recently, I was also consciously wanting to bring in more than just the one sense.

Allen Ginsberg was huge for me a few years ago -- his declarative nature. I was so relieved by his use of people’s names! Recently I’ve been reading C.D Wright and Charles Wright. There’s something earthy and elliptical I love. I want.

Rhea Tregebov was my first mentor. Reading her work was the permission I needed. I remember reading The Proving Grounds, sitting in the Future Bakery, bawling my eyes out and thinking “You can write this?” You’re allowed?”

A baker. Or A film critic. Which, I guess, is also a writer.

It was portable, cheaper than photography, and seemed the most direct way to connect to myself and the world.

I’m working on a memoir. I have no idea how to do it. But it seems to have started.