12 or 20 questions: with Mary Pinkoski 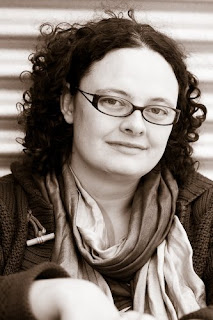 [photo credit to Randall Edwards] Mary Pinkoski is a spoken word poet from Edmonton and the winner of the 2008 National CBC Poetry Faceoff. Her writing has been called dynamic and visceral. Mary has presented her unique style of spoken word both nationally and internationally. In addition to her live performances, Mary's work has been played on CBC Radio One's Radio Active and the Key of A, as well as Philadelphia's Spotlight on Jazz and Poetry. Mary's first chapbook, Set List: poems for lonely microphones, was published by red nettle press.

15 - What other writers or writings are important for your work, or simply your life outside of your work?
This, changes daily. I am always being influenced by what I read. However there have been a few steady influences in my writing from writers who have encouraged me and inspired me through their own works.
The constant support and mentoring from Edmonton novelist Thomas Trofimuk has been instrumental in my continued development as a writer. His patience and encouragement has often propelled me forward as a writer.
Toronto-based writer Zoe Whittall’s encouragement many years ago is what first made me believe that I could be a writer, and ignited the possibility that I could actually see myself as a writer. Zoe’s writing continues to inspire me.
Finally my work as a performance poet has been encouraged by many including Calgary poet Sheri-D Wilson and Edmonton poet TL Cowan. Also American spoken word/slam poet Jack McCarthy has been fundamental in helping me believe in my work and the need to showcase it.
I feel very blessed to be surrounded by these mentors.
16 - What would you like to do that you haven't yet done?
Accomplish world domination peace. Own a pony. Talk on a hamburger phone. Or work seriously on a manuscript that is suitable for publication.
17 - If you could pick any other occupation to attempt, what would it be? Or, alternately, what do you think you would have ended up doing had you not been a writer?
Is day dreamer an occupation? I would like to try that.
If I didn’t work in communications during the day, I would love to devote myself full-time to writing. And, if devoting myself full-time to writing was not feasible, I would like to work as an historical interpreter at a museum, which basically brings us full circle back to being a day dreamer.
18 - What made you write, as opposed to doing something else?
Writing came naturally to me. I am terrible at math – which eliminates all the sciences – and I have a poor sense of rhythm, so music and dancing were out when I turned to the arts, and drawing was feasible. Once I thought I might be a pool shark or backroom gambler, but I never seem to have the spare change to get very far in this regard.
I see writing as an extension of how I communicate. It is as much as necessity as talking. It seems inherently part of me and what I was meant to do. Of course, I have had some fantastic encouragement along the way which has propelled me forward (and makes the task easier).
19 - What was the last great book you read? What was the last great film?
I have been touting The Book Thief, Markus Zusak, as the last great book I have read. I recommend it to everyone and force it onto those who I care deeply about.
I tend to navigate to the old films when I look for greatness. I recently re-watched Mr. Smith Goes To Washington, which I love for its optimism and its use of the word ‘filibuster.’
20 - What are you currently working on?
I am working on a number of projects. Most immediately, I am working on a second chapbook of spoken work poems. I am toying with the idea of creating a spoken word CD. I am also working seriously on preparing a manuscript of ‘for-the-page’ poetry.
I have 2 incomplete novels kicking around, but I don’t give them the attention they deserve.
12 or 20 questions archive (second series);
Posted by rob mclennan at 10:02 AM
Labels: 12 or 20 questions, Mary Pinkoski, Red Nettle Press