12 or 20 questions: with Annabel Lyon 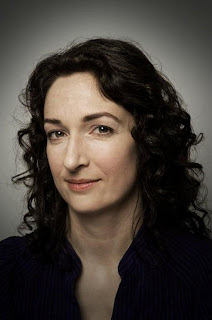 Annabel Lyon is the author of Oxygen (stories), The Best Thing for You (novellas), and All-Season Edie (juvenile novel). Her first novel for adults, The Golden Mean, about the relationship between Aristotle and the teenaged Alexander the Great, will be published by Random House in August 2009. She lives in New Westminster with her husband and two children.


After Oxygen was published I got teaching gigs, reviewing gigs, etc. So I was able (barely) to make a living as a writer, whereas before I had to have other jobs. The Golden Mean doesn’t quite have the stylised prose that Oxygen has—I’m not sure I could have sustained that for a novel. But it definitely has more story, more range and depth. My joke about Oxygen was always that it had just one story: a girl and her dad watching TV. The Golden Mean has Aristotle and Alexander the Great.


I do write non-fiction too (journalism), but really it wasn’t something I ever thought much about. It’s just the way I process the world. I think in terms of fiction.

I tend to have just one idea at a time, and work very slowly. With stories, I usually write a super-slow first draft that comes out pretty close to the finished thing; with longer works and definitely with the novel it was much more a process of multiple revisions.

Short stories start in tiny moments: a bit of overheard dialogue, a perfect description, an interesting piece of clothing…. Longer stories usually start with a character facing some kind of problem. The Golden Mean started with me reading a thumbnail bio of Aristotle and thinking, that’s interesting, how would you structure a novel around that? Then sketching an outline, almost for fun, and then realizing when I turned to other things that the idea kept nagging me, and I had to work on it some more. And then some more. And then for a few years more.


They’re kind of like doing the laundry. I don’t enjoy them or not enjoy them; they’re part of the job, so I do them. I’m not a natural performer but I don’t get too nervous either.


I subscribe to Martha Nussbaum’s view of literature as essentially an exercise in ethics: you’re putting out an ethical world-view, challenging your own and your readers’ ethical preconceptions. That doesn’t mean you’re resolving things necessarily, but you’re opening people’s minds to all the shades of grey. It’s not so much “is abortion wrong?” as “what does it mean to live a good life?”.


I don’t know how to answer this one. I write what I’m able to, to the best of my abilities. I never really feel like I choose my subject matter; it’s just what I’m capable of at that time. So I’m not consciously forging a role for myself in the larger culture. I can’t speak for anyone else.


Both. When I’m in the middle of working on something, everyone is an idiot but me. Then, when I’ve had a chance to get a bit of distance from the thing, I almost always take suggestions from my editors really well, and work to incorporate them. I decided early on to keep my inner diva in.

Write each book as though it will be your last; don’t try to keep anything back for the next book. Someone I know once got advice to this effect from Richard Ford.


I used to love to write in the morning, but I have two kids now and they usually have other plans for me. These days my writing time tends to be in the afternoons when my husband’s off work and can keep the kids out of my hair. And I can work while they’re napping, after they’re in bed, etc. I’ve got to the point where I can focus pretty quickly and get small but substantive things done in small amounts of time.


If something gets stuck I put it away for a while, and come back to it when I’m feeling less frustrated. That’s about it.

12 - What was your most recent Hallowe'en costume?

I was a kid! I don’t remember! Ask me another quirky one! I can be quirky!


No, I think McFadden has it right (for me, anyway).


The writers I read and reread are Joy Williams, Richard Ford, Alice Munro, William Trevor, John Updike…. I read the New Yorker religiously and get really upset when someone takes it in the bathroom and gets it damp.


Run a marathon in less than four hours.


Sometimes I fantasize about taking a PhD in law and having an academic career. I wouldn’t have made a good lawyer but I like thinking and reading and writing about ethics. I’ve done a fair bit of teaching of one sort or another and I think I could have done that.


I don’t know. It’s just something that’s always been there. Before I could read, I dictated stories to my mom and then drew pictures around what she’d written. I always knew writing stories was going to be my thing.


I sat on the Rogers Writers’ Trust jury last year and got to read pretty much everything published in Canada in 2007/8. So I read lots of good stuff. Memorably, Miriam Toews The Flying Troutmans, Lee Henderson The Man Game, Stan Dragland The Drowned Lands, Rivka Galchen Atmospheric Disturbances, Ahmad Saidullah Happiness and Other Disorders, Craig Boyko Blackouts.

Last great movie would be The Diving Bell and the Butterfly. I rented it a few months ago.

I’m working on a sequel to my kids book, All-Season Edie, tentatively entitled Encore Edie. I’m also thinking about a sequel to The Golden Mean, but haven’t started writing it yet.