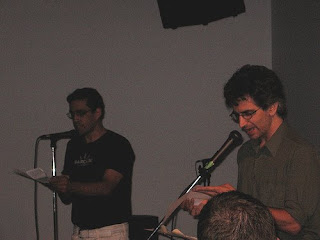 Louis Cabri’s The Mood Embosser was published by Coach House Books. –that can’t is forthcoming from Nomados. He has edited and introduced the forthcoming Fred Wah selected poems, The False Laws of Narrative, for Wilfrid Laurier UP. Together with Peter Quartermain, he has edited a forthcoming special issue of ESC on event and sound in poetry. Recent poems and an interview by Roger Farr appear in The Capilano Review. He teaches at the University of Windsor.

How does your most recent work compare to your previous?

How does it feel different?

Less of a feel for narrative than in previous work, with clearer head about what it, the head, thinks about narrative in poetry.

(I need to date this March 2009, because feelings change.)
2 - How did you come to poetry first, as opposed to, say, fiction or non-fiction?

Poetry speaks to the mechanics of perception. Fiction and non-fiction, more often than not, represent perceptions. Poetry involves more than representing perceptions.

3 - How long does it take to start any particular writing project?

It takes sitting down time.

Does your writing intitially come quickly, or is it a slow process?

Searching for the hook—phrase, say—can take a couple of sitting-down days, although several hooks may occur at once. Hooks might only become identifiable, sometimes, days, or even weeks, later.

Do first drafts appear looking close to their final shape, or does your work come out of copious notes?
In answering a “process” question like this one, i’m already making assumptions about what a poem is. Insofar as process is involved, first drafts do resemble final—it’s the hook phrase, which casts a kind of net or pattern. But then there’s getting to the first draft, which can take awhile, searching around in, sifting through scribbles and squiggles. A poem often comes out of sitting-down time, scribbling longhand and laptop typing, inputting previous day’s scribbles, reviewing, adding more, searching for hooks among squiggles, teasing out patterns.
4 - Where does a poem usually begin for you?

Usually begins discovering a hook or rhythmic or visual imprint and that usually begins the beginning of the poem. I suppose the premise behind this is that there will be something, a “hook,” that scribbles and squiggles might disclose.

Are you an author of short pieces that end up combining into a larger project, or are you working on a "book" from the very beginning?
There’s an industry behind the word “author.” I’m not that much part of that.

I don’t recognize the two positions outlined by this question as that different from each other. A “short piece” can be book length, just as a long piece can be composed of very short things “from the very beginning.”
5 - Are public readings part of or counter to your creative process? Are you the sort of writer who enjoys doing readings?

Now they can be an integral part of the poem itself; before, for me, performance was not part of the poem. This reflects an objective change in poetryworld, too, I believe. Readings are stressful but necessary events. Poetry becomes an event. I try to take their necessity seriously, their stress lightly.

6 - Do you have any theoretical concerns behind your writing?

What kinds of questions are you trying to answer with your work?

I don’t think I’m trying to answer questions, other than the same question over and over of whether this specific poem works the way it’s written.

Same as it ever was: either to drop out, revolutionize, or accede.

Does s/he even have one?

At least one role—to read Pasternak on Mayakovsky.

8 - What is the best piece of advice you've heard (not necessarily given to you directly)?
I have two. The first combines a thought by Ron Silliman with a thought by Charles Bernstein:

The second is from Fred Wah:

Words find ways of coming true, so beware what you write.

10 - How easy has it been for you to move between genres (poetry to critical prose)? What do you see as the appeal?
I find it very difficult to move between poetry and critical prose. Using critical prose, which is difficult to do well, one can write about poetry, which is difficult to do well. Critical prose reproduced by the academy reproduces the academic profession and the beleagered middle class concept it clings to of upward mobility, and all that doesn’t necessarily turn into helpful prose on poetry. The entire weight of the institution is against poetry, even as it professes to uphold poetic traditions etc. But there can be worse weights than the purported weight of liberal well-meaning academics: persecution, etc.

11 - When your writing gets stalled, where do you turn or return for (for lack of a better word) inspiration?
Examples of anonymity.
13 - What was your most recent Hallowe'en costume?
Writing In Our Time by Pauline Butling and Susan Rudy.

14 - David W. McFadden once said that books come from books, but are there any other forms that influence your work, whether nature, music, science or visual art?
In addition to all that you mention: poet-friends’ lives. And the fact of a desk.

15 - What other writers or writings are important for your work, or simply your life outside of your work?
Writing is a life outside of work. Having the possibility of finding an outside to work is important.
16 - What would you like to do that you haven't yet done?
Finish reading Rodrigo Toscano’s Collapsible Poetics Theater. Unpack; it’s been three years.
17 - If you could pick any other occupation to attempt, what would it be?

Linguist, of some kind.