12 or 20 questions: with Rebecca Rosenblum 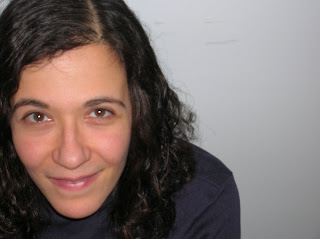 Rebecca Rosenblum's work has appeared or will soon in Journey Prize Stories 19, The New Quarterly, Coming Attractions, Best Canadian Stories 08, The Fiddlehead and The Antigonish Review. Her collection, Once, was one of Quill and Quire's 15 Books That Mattered in 2008. The Maclean's blog called Rebecca "Canlit Rookie of the Year."

It's hard to quantify--I still have the same job, same apartment, same friends, etc., etc. But having Once in the world has been huge for me. For one thing, it helped me get taken seriously; stories bound in a book get a lot more respect than stories floating on my hard drive or on 8.5x11 paper. And thus I sometimes take myself a little more seriously. The new work isn't wildly different from the old, but it is more complicated and more diverse, stretches I felt capable of makingafter the experience of writing Once.

I didn't really; I wrote poetry in grade school, and lots of little playlets and funny essays in high school. I got serious about writing fiction towards graduation, but once in university, I got mired in some longer projects that went nowhere. It was only in my midtwenties that I got serious about stories; probably not a coincidence that they were the only things I ever wrote that really worked.

3 - How long does it take to start any particular writing project? Does your writing intially come quickly, or is it a slow process? Do first drafts appear looking close to their final shape, or does your work come out of copious notes?

I write first drafts pretty quickly. I usually have a good sense of the rhythms and voices I want to use from the start, but I don't outline and I definitely don't fret over the perfect word. It'll take a couple weeks to write a first draft start to finish, but it won't look anything like a real story: too long, formless, often plotless, frequently incoherent. It's the other four drafts, the workshops and editing process, and the banging my head against the printouts that take the real time.

I start with characters, always; working from "who?" always eventually leads to the "what," and I've mainly been unsuccessful trying to work the other way. Largely I work one story at a time. I have some trouble thinking in book-length chunks--that sort of leads to watery writing for me. I have to stay in the moment, or at least within 15 or 20 pages of the moment, to have any sort of punch in my work. I'm trying, as ever, to challenge and expand my horizons.

I used to be terrified of readings, and now I do enjoy them, mainly--it's great to hear and feel and see an audience responding to my work, or not responding even, as the case my be. I haven't reached the point where I am comfortable reading unfinished work and using the response or lack thereof to improve it--too naked for me. But I can see how that would be helpful, if I can ever buck up and try it.

In general, I don't work with theory too much; again, it's too big for me, winds up scattering the story. The questions I'm trying to answer vary from story to story, but some recur: how do people define themselves? how long does it take? what can change that? how do people impact each other? when is that impact ok and when is it violent? how can a person get over violence?

To reflect what we see in the culture. Not necessarily with 8mega-pixel accuracy, but to refract what we see through the prism of our imaginations and biases and senses of humour. To show the world in ways that makes a little familiar and a little strange, strange enough that you'd go back to the original to see how it codes. Oh, and to entertain.

I really need a lot of eyes on my work, a lot of different opinions marked on the pages, before I can hone a piece of writing into a functional story. I've been working with the same writers for years, trading work and ideas. Their criticism and support has made my stories so much better. And the more literal "editors" in my life, the people I've worked with on pieces for literary magazines, and especially John Metcalf on the book, have taught me mountains about how I write and what I want to write. The final decision and responsibility always rests with me, but I need others to tell me what all the options are.

A classic: Hemingway's iceberg metaphor, which I boil down to "a writer needs to know everything, not show everything."

I work 9ish to 5ish, and do a lot of other things, too. I write mainly in the evenings. I think I work best as and after the sun sets, with a plate of stirfry to the left of the keyboard and notes scattered on my desk and on the floor. But I'll take what I can get--20 minutes waiting on hold with insurance people, half an hour during silent work while teaching, two lines before I go to bed...it gets done, mainly. That's the important thing.

Loud music mainly. But I don't stall often--I mean, I don't stop writing. What for some people would be a block where they didn't write at all for me will just be a period where I write garbage for a few days (weeks?) Usually, I just have to push through all that to get to something good. But a run in the ravine with My Chemical Romance on the iPod also helps.

Goldilocks is a good writer-figure in fairy tales--just too curious for her own good! I would also like to write like Prince Charming in Cinderella: following the clues, constructing a strategy, never giving up on my romantic dreams, blah blah blah. Anyone but Sleeping Beauty,I suppose.

I am a very uncritical filmgoer, but I love movies. Movies in theatres achieve without effort what we strive so hard for on the page--a complete immersive experience, so big it drowns out any other thought in your head. I'll actually watch anything--the last three movies I saw were Duplicity, 17 Again and The Class, and loved the mall--but I do appreciate great screenwriting like I appreciate any great writing. Michael Clayton had some of the finest dialogue I've seen recently, and a powerfully good story, and though it was dark, the pace moved incredibly well. I go for the entertainment, but I learn a lot from movies too.

There is little I feel I need to read--I don't need to pick up books close to what I'm writing to help me along, although I definitely feel a drought if I'm not reading anything. When I'm in real doubt, I go back to John Updike, whose work has inspired me far more than is maybe apparent. And Francesca Lia Block, too--those fairy tales! I also feel lucky that new Canadian writing is so vibrant right now! I love showing up at readings knowing there are three people on the bill that I've never heard of, but likely at least two will blow me away...and half the audience is probably people I admire, too.

Finish my second book, ride in a hot air balloon, own property, make sushi (since writing the first draft of this, I did the last one!! Thrilling!) Mainly the first one.

I find this a funny question to ask Canadian writers, since most of the ones I know have another profession or several. I work as an editor four days a week and this spring I've been teaching the other one. I am also writing some essays and reviews, judging a contest, writing a blog, in addition to The Second Book. Some of those things pay more than others, some are more fun than others.I'm happy to do them all, but I definitely wouldn't like to add anything else to the list.

I tried a bunch of different creative things when I was younger--I played classical piano for fifteen years, and did theatre and improv for a while, too. I enjoyed them all, but I was never good enough at any of the other forms of creativity to actually express something unique or heartfelt, to mess around as much as I wanted to. Writing felt, and feels, natural enough that I can experiment, and dream big.

I read Bech: a Book by John Updike a couple weeks ago, and that felt truly great because it was both satirical and sympathetic--Bech is an intensely mockable character, and yet Updike gives him enough space and enough works to justify himself, as well as laugh at himself. I love that. I see (and adore) a lot of bad movies, but the last seriously good one I saw was the French film The Class, about a teacher in France struggling with racial, social, sexual and who knows what other sorts of tensions in his classroom. I taught high school classes for the first time this spring, and it was fascinating to see how the filmmakers nailed it (the movie was based on a book about actual events). I learned a lot from that one, which you really can't say about most movies.