12 or 20 questions: with Jake Kennedy 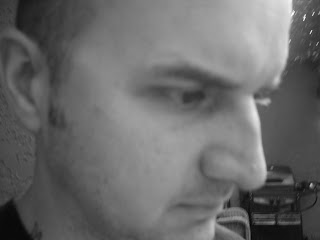 Human: When will Jake get his first trade book published?
ALICE: Soon, I think.
Human: When that book is published, how will it change Jake's life?
ALICE: The past is history, the future a mystery. Today is a gift, that's why it is called "the present".
Human: Then you are suggesting that he should title this future collection 'Cliché'?
ALICE: Good reasoning. If you were him would you do that?

To me, poetry sounds like this: “The ever-hooded sea.” Kapow. Whereas fiction too often sounds like: “The Marquis went out at five o’clock.” Zzzzz. That is, poetry seems marvelous because its logic is so far away from logic.

More and more I love the drafting process. It’s very exciting to me to have that text there on the page and then to get a chance to reshape it. I love finding the bad notes and then trying to replay that section or idea. It’s taken me quite a while to come to terms with the question ‘why does this matter?’ But that kind of demand—applicable, I think, to conceptual or lyrical poetry—can really wake you up.

I tend to start with short pieces (and I’m still working on building them into something larger) and these poems begin more as an appetite. The writing of the poems, for me, seems like a physical process at first: a part of the stomach and a part of the mouth, too. When I write it feels like I’m eating!

I love the idea of the poetry reading being a gathering point for public culture. However, I associate most public readings with desk-drool and the sound of flat-lining. So, in the reading series that I help co-ordinate (LIT@ALT), I try to go for a more collaborative, sharing model. For example, I try to pair up a writer with a visual artist. The focus on this kind of reading, then, is on the process of “making” and on communicating that process to a (often non-specialist) community. My colleague and friend Jason Dewinetz does this in his Vertigo Voices reading series, too. Otherwise, I would like to use the poetry reading as an excuse to gather for a party. kevin mcpherson eckhoff and I recently put on an event called Word Ruckus that was an all-day/all-night poetry shindig: we interviewed kids about poetry/words; we baked poetry cakes; we listened to ten or more writers read their work; we showed poetry films; we drank the beer. I think it was fun! In terms of whether I personally like to read my work in public, I do. I like to pretend, when I am before the mic, that I am one-part Leonard Cohen and one-part Jim Morrison. In truth, I am just all-parts bald.

This is a great question. I like to think that I am interested in and even committed to social justice/critiques of power and yet I recognize that my own art is hardly subversive or radical in terms of direct political action. So for a while I have been worrying, or worried, that the work I was doing needed to sharpen its critique. However, what I’ve come to realize is that as much as I admire Critical Art Ensemble, for instance, I am not primarily built to do that kind of creative action. I take some other guidance then from folks like Erica Hunt: “Poetry makes a path out of ordinary language, contesting the ordinary claims about the ‘real.’” So what I want to do in my poetry is to just keep convincing myself that ‘extraordinary connections’ is the condition of reality—therefore, everyone and everything matters. And what I want to do in my life is act on this evidence.

I will say that my position is that the writer should have many, perhaps often contradictory, roles in culture. I think it’s great to have Geoffrey Hills and Anne Waldmans, you know? That is, I think it is healthy for our world to have examples of both “poet as purist” and “poet as agitator.” However, I do think the role of the writer should have something to do with using the imagination in the service of widening hope or wonder. That sounds inflated, maybe, or vague but I believe the writer’s job has to be connected with potentiality, with offering glimpses of openness where one thought everything was otherwise foreclosed.

Human: When Jake works with an outside editor will it be helpful?
ALICE: The past and future are one.

I think the thing that I see in all the writers that I admire is a pretty impressive work ethic and a seriousness about the “labour” of writing. And I think this “seriousness” transcends literary camps. So Kenneth Goldsmith’s discipline in writing Day, say, and Donald Hall’s ten-years-in-the-drawer philosophy are equally as inspiring to me. I like the idea of dedicating oneself so wholly to a project. In terms of specific advice, I had the great luck to study under Don Coles for a few years at York University. What Don modelled was a Cyril Connolly-type stance that you should always be trying to make your art great. I take this to be not a self-inflating pose but rather a reminder to be respectful to the deep wonders and potentiality of the art.

I try to write every day. I tend to work in the mornings—before my daughter wakes up! But I also try to steal an hour or so during the day. I often have several smaller pieces on the go and so most of my writing time is spent redrafting rather than composing anew.

If a tour through my bookshelf doesn’t help then I often get jumpstarts from the visual arts.

The family is outside, safe on the lawn, right? If so, my College-issued T60 laptop—because nowadays I often type directly into the computer. I know it’s sexier to use a Moleskine but I have been told by real punks that it’s even sexier to use a 4-year-old PC with a questionable processor and 20-year-old hard-drive technology.

As I mention above, I am pretty fascinated by painting and sculpture and performance art. I love music, too, but it very rarely sends me to the page.

For me, so far, the way has been shown by writers like Herr Rilke, Osip Mandelstam, Andre Breton, Francis Ponge, Wallace Stevens, Rosmarie Waldrop, Susan Howe, Harryette Mullen, Erica Hunt, Christian Bök, Lisa Robertson, Jena Osman. All of these writers, it seems to me, are (or were) committed to extending the possibilities of language/speech. Also, despite what I would call the drive to innovate that each of these writers embody they—it seems to me—still produce deeply human work. Also, at Okanagan College here, I am very lucky to be surrounded by some wonderful writers. Besides mr. mcpherson eckhoff, I regularly talk or share writing with Jason Dewinetz and Sean Johnston. These are my people!

I would like to be an engaged Zen priest, rob. I would also like to be a right-winger on the Toronto Maple Leafs if the NHL was actually called the APHLoN (Anarchist Pacifist Hockey League of Niceness).

I like this line from Mr. Stevens: “I had a feeling about the world that created a need that nothing satisfied except poetry.”

I am working through Pierre Joris’s and Jerome Rothenberg’s Poems for the Millennium anthologies. How did they build such amazing volumes? It’s pretty humbling reading these astonishing international poets. The last great film I saw was Wolverine. This is a feminist satire of the X-Men character—in this version, instead of boasting incandescent rage and fists that produce phallic blades, the protagonist is even-tempered and just knits a lot (needles in lieu of Adamantium claws). It’s fucking awesome!

I am working on a collection of poems entitled Book of Things. Most of the pieces are “studies” that try to use objects/things as starting points for wider (I hope!) meditations on the stuff of our world. It’s my canuck attempt to do Francis Ponge. I am also working with kevin mcpherson eckhoff on Death Valley: A Collaborative Community Western Novel. kevin and I are soliciting a single, western-themed line from folks in and around our Okanagan community. Our job, after collecting a couple of thousand lines, will be to arrange those single lines into a so-called coherent narrative. This “novel” interests me because it shifts some of the codes/mechanics of poetry (compression; chance; assemblage; disjuncture) into the realm of narrative fiction.