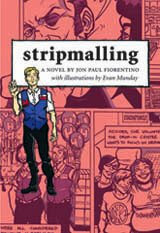 What does one say about Stripmalling (Toronto ON: ECW Press, 2009), the first novel by Montreal writer and editor Jon Paul Fiorentino? For some time, through a number of poetry collections and a collection of short stories, including the most recent The Theory of the Loser Class (Toronto ON: Coach House Books, 2006), Fiorentino has been working a kind of “loser poetics,” writing out failure after ironically self-absorbed failure, culminating in a novel bearing the weight of exactly that. In his first foray into the novel, Fiorentino’s main character is “Jonny,” a character that eerie resembles the author himself as well as a number of points of character and story from his own present and into his past, working deliberately to not only blur the lines between, but to render the base “facts” of such almost irrelevant. “Jonny” works in a working-class suburb at a dead-end job dealing low-end pharmaceuticals to the locals, all the time while desperately trying to keep from fucking up his relationship with the woman he thinks he might love, and making excuses for why he isn’t writing the books that he says that he wants to, even while being accused of wanting the fame that comes with being an author, as opposed to doing the work that comes with being a writer. What’s the point of all this, you might wonder? Hilariously funny, parts of this come off as oddly cutting commentary on the appearances of the writing life, just as much as strange episodes that somehow fit together through the experiences of the character “Jonny,” trying to keep it all together even as he does everything he can to fuck everything up.

“Tuck in that shirt,” Mr. Stubler would say.

That’s the kind of relationship we had. Mr. Stubler was an ex-minor pro hockey player with a Napoleon complex. He always talked about how he would have made more money and would have broken into the NHL if it weren’t for the widely held bias against players under five foot seven.

“I had mad skills!” Mr. Stubler would suddenly shout out. “I had hands. Oh boy, did
I have good hands! I could dangle. I mean really dangle, boy.”

It was always a good policy to ignore Mr. Stubler’s Tourettic bursts of bitter nostalgia. But sometimes I could not hold back. I was in a particularly good mood when I blew up at Mr. Stubler. I had spent the whole morning stealing money from propane customers, and between customers, I wrote what I considered to be a very successful comedy bit called “Voice Mails to Helen Keller.”

It practically wrote itself: “Hello? Helen? Why won’t you answer? WAKE THE FUCK UP! I’m trying to COMMUNICATE with you!” I was still developing my voice, but this was a huge step forward. Pure gold.

“Jonny, what did I tell you about tucking in your shirt?” Stubler asked.

“Sorry Mr. Stubler. I forget. Remind me again. Are you pro- or anti-tuck?”

“Sigh.” I tucked in my shirt, and, as soon as he turned his back, I untucked it again.

I always had trouble with jocks and ex-jocks like Stubler. They treated everyone the way their coaches treated them. It was a kind of “eyes on the prize” / “in it to win it” mentality. And since there was no prize in the life of a gas jockey, it was very hard to buy in. (“It’s Hard to Get Fire from a Gas Station, but I’m Special”)

Fiorentino writes his author as self-indulgent, interrupts his own story to tell you another, includes cartoons and self-interviews created by (a later creation) the “author/character” with his ex, and all sorts of other distractions that, instead of being distractions, end up being exactly the point. Unlike some of his previous work, there are absurd points of prose here that are reminiscent of another Montreal writer of humourous prose, David McGimpsey, close friend to Fiorentino. As he writes in an earlier section of the book, “Interruption: Confession”:

I would like to write a book that makes the reader feel like a better person but I seem destined to write the kind of books that make people feel ripped-off and embarrassed. I don’t know what it is about the stories I write. Why do I dwell on the formative years, the narratives of failure and shame, the dry humping and the huffing? Why don’t I just give the people what they want and write about gardens and tea with Aunt Gertrude? And why do I sign book contracts without reading them?

I have tried to write dead “serious” prose fiction, but in the midst of a gripping story like the one about a young, deaf, autistic woman discovering her gift for turkey calling, I always find myself making fun of the earnestness, the characters and most important, myself. In the end I prefer to place my own preciousness where it belongs: in my record-setting Care Bear collection.

This is either the kind of book that you will absolutely love, or absolutely hate. There seems no middle-ground with the work of Jon Paul Fiorentino, in this brilliantly-woven hodge-podge of a novel that makes sense, despite any misgivings a reader might have about its structure being invented at the whim of a blender. It hasn’t. Every page, every word, is deliberate, thoughtful, disturbingly sad, clever, hopeful, hopeless and even strange. The only question is whether or not you care to come in.
Posted by rob mclennan at 6:18 AM
Labels: ECW Press, Jon Paul Fiorentino