When I died the first time,
I got a sinking feeling.

It’s easier to think I can’t
than I don’t want to.

With an imposed trajectory,
a valiant obstacle in my course,
I’m off the hook.

Leisure is to labour
as is compromise to fervor.

The second time,
I want to be flesh
chummed by bleachers
of serrated teeth.

Rolled up in a carpet
and plunked into the sea. 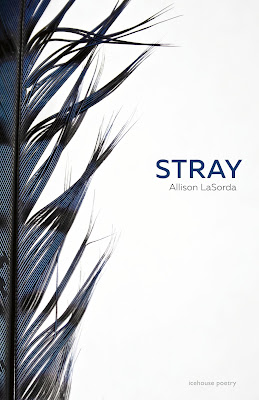 I’m intrigued by Toronto poet Allison LaSorda’s debut, STRAY (Fredericton NB: Goose Lane Editions/icehouse poetry, 2017), a collection of tight, predominantly first-person poems. Working through “memories among people and places” (as American poet Heather Christle writes in her blurb), LaSorda composes her short narratives in lyric short form, utilizing a precise language in a collection of pieces most of which are single-page and entirely self-contained, even as the memories explored throughout might begin to bounce around and accumulate. “Without expecting gentleness,” she writes, to open the poem “Reply to the Shepherd,” “I take my moral code in stride.” LaSorda’s lyrics explore how best to navigate people, the world and the self, exploring moral choices and personal history, and suggesting far more than she spells out. “I quit music for Lent,” she writes, to open the poem “Glory Days,” “but sighed / so loud a tune came out.”

I was intrigued by the sequence “The Smallest Island,” a poem that feels, structurally, different than most of the other pieces in the collection for its stretched-out sense. Unfortunately, while the first three sections provide a series of openings, moving forward through the sequence, the fourth and final section felt rushed, somehow a mash of information attempting to wrap the poem up in a single (and longer than the other sections) space. Might another section or two or three instead have kept the right kind of pacing? Compared to the rest of the collection, the first three sections of this poem read as sketches, writing out lines with the lightest touch. As the third in the sequence reads:

You dig a fingernail
into turquoise vinyl.

Your sister turns over
in a lawn chair, her skin
glossy and marked by the straps.

While handstanding, you see
her sandal drift into the deep end.
It settles amid ant clusters
at pool bottom.
You dive to rescue it,
but she throws it back. Fetch.