Wittgenstein wrote: The limits of my language mean the limits of my world. Incomplete in several languages, I grow heartened in the places I rub against the edges of different tongues. The world’s languages push against this English I write, they work their way in, ingeniously trespass. Writing, I imagine my text will become a conduit for illegal traffic, a body to incubate a different type of future—fractured, polyphonic, cacophonous, but sutured with silence, with all that remains impossible to put into words.

Things aren’t all so tangible and sayable as people would usually have us believe, most experiences are unsayable. They happen in a space that no word has ever entered and more unsayable than all other things are works of art, those mysterious existences, whose life endures beside our own small, transitory life.

Edited by Meghan Bell and the “Growing Room Collective” and co-produced through and by Vancouver’s Room Magazine and Caitlin Press is the anthology Making Room: Forty Years of Room Magazine (2017), an impressive four hundred pages plus of poetry, fiction, essays, translations and interviews covering the first four decades of a journal dedicated to publishing, supporting and promoting a series of diverse voices of Canadian writers. Sectioned into decades, part of what is fascinating about this volume is the way in which each section opens with an interview with an editor from that period, from co-founder Gayla Reid (“The First Decade (1975-1987)”), editor Mary Schendlinger (“The Second Decade (1988-1997”), editor Lana Okerlund (“The Third Decade (1998-2007)”) and former Managing Editor Rachel Thompson (“The Fourth Decade (2008-2016)”). The interviews provide an essential context for not only the journal and its activities, but the surrounding culture and communities. As co-founder Gayla Reid responds in her interview:

We felt very much that we belonged in the feminist landscape. High time that women had their own space to write about whatever we wanted. Women’s voices needed to be heard. Silent no more. There was no requirement that submissions should explicitly address sexism. We wanted to publish writing by women that was good writing, and we were convinced that there would be a lot of it around—and there was. At the time, writers typically got started by publishing in a little literary magazine (usually edited by men). So, Room would be a place where women could get started. Our voices could be heard, we could emerge, develop, blossom—all those growing images.

What becomes interesting, as well, is in beginning to understand, by creating a thoughtfully-edited journal of great writing, just how much Room helped to carve out a real and sustained space for feminist writing and conversation, opening the door to multiple writers, conversations and journals, including more recent publications such as Canthius and Minola Review. As Reid continues, in her interview:

At first we were busy choosing from submitted works. After a few years, we also sought out specific Canadian female writers. The first adventure we had in this area was a special issue on Québécoise feminist writers [4.1], which was tremendously exciting because we did not know their work—very little of it was available in translation
In terms of literary writing, I’d say we were most often looking for what Doris Lessing called the “small personal voice,” which is what poetry and short fiction writing is particularly good at rendering. 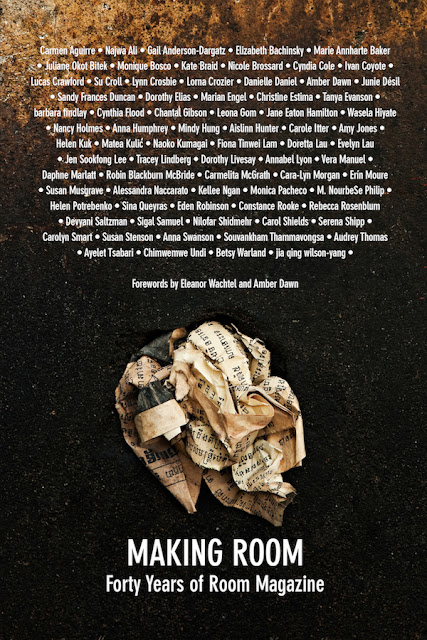 Room changed CanLit when Cyndia Cole’s groundbreaking “No Rape No” (p. 24) was first published in the 1970s. Room has shown CanLit that women’s complex bodies are indeed a bit, with fiction like Juliane Okot Bitek’s “The Busuuti and the Bra” (p. 109) and with poems like jia qing wilson-yang’s “trans womanhood, in colour” (p. 376). Room continues to recognize that trans and non-binary gender narratives are an inherent and esteemed part of feminist literature by calling attention to Ivan Coyote’s “My Hero” (p. 195) and Lucas Crawford’s “Failed Séances for Rita MacNeil” (p. 364). By honouring work like Doretta Lau’s “Best Practices for Time Travel” (p. 388) and Eden Robinson’s “Lament” (p. 221, Room challenges tired notions that social justice and Indigenous speculative fiction are anything less than synonymous with great literature.
As you read this anthology, you will undoubtedly regard it as a timely collection of seventy-eight exceptional literary works. Please also take a moment to marvel at how scarcity and shame have not claimed a single page, not a single line or word of this anthology. You, dear readers, and I, and the seventy-five remarkable contributors are both teaching and learning a new message, right now. Say it with me. There is Room. We do fit.