On the lilac, buds sharpen:
a quotidian green spring.

The sky is traceless,
nothing new

But these windows
with our names,

and patience shining like the glass
cleaned by hand,

Something transparent,
we know,

Consider the heft of light
which has no face

but one worth dividing.

How its clear halo presses
as it comes,

how a transverse cut
could also be contrails.

Minneapolis poet Rachel Moritz’s second full-length poetry title is Sweet Velocity (Jackson WY: Lost Roads Press, 2017), a collection of short, sharp and exquisite meditations constructed out of direct and indirect statements, heartbreaks and hesitations, observations and queries. Hers is a poetry of inquiry, and her poems are sketched from point to point, thought to thought—akin to the English-language ghazal—creating a poetry of accumulation; less a singular scene or thought than a trajectory. Set in three numbered sections, two of which are made up of shorter lyrics (including three poems titled “Near future” that open and close the collection), and these sections bookend the third section, a sequence of poem-to-footnote poems, composed as a kind of “call and response” sequence. In a 2016 interview posted at Speaking of Marvels, she discusses the work-in-progress that eventually became Sweet Velocity, specifically the chapbook How Absence (MIEL Books, 2015), the poems of which were folded into the current book: “The poems in How Absence are largely concerned with birth and arrival. They were written in the first years of my son’s life. Among the book’s themes are the intense experiences of physical intimacy that accompany motherhood, coupled with the inherent experience of distance/absence that is conception via artificial insemination, as well as a C-Section delivery. Time is also important.” Further in the same interview, she writes:

The poems in this chapbook are part of a longer manuscript titled Sweet Velocity, which marries poems about my son’s birth with poems written in the wake of my father’s death, which occurred almost a year later. I’m largely finished with this project, but still tweaking individual poems, undertaking some final edits. 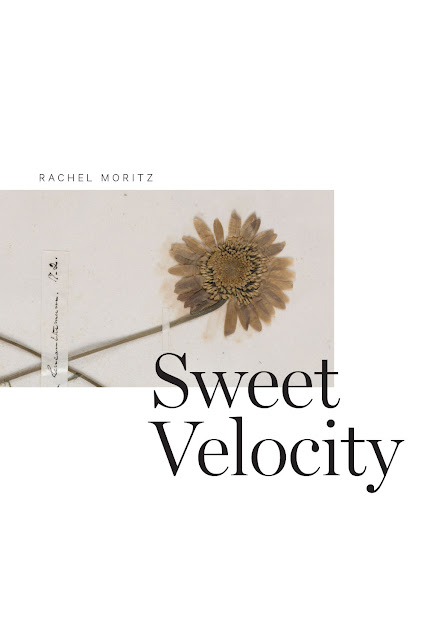 In Moritz’ poems, the “sweet velocity” of time only increases in speed and intensity, including a series of moments both caught and missed, attempting to pause when she can, and capture when appropriate, all while working to absorb as much as humanly possible. Writing as both parent and child, Moritz adds her voice to a list of contemporary poets exploring parenting, specifically motherhood, from Margaret Christakos to Julie Carr, Pattie McCarthy to Rachel Zucker. As Moritz writes in the poem “Depart”: “do you leave the child / to discover what it will feel like when he leaves [.]”