Charles Rafferty, The Smoke of Horses

The day was bright. We saw where the water stopped rising by the marks on the vinyl siding. The raccoons had all come down from their trees, but no one could say where they had gone. On our walk, we found a truck tire welded to the riverbank. The water beside it was a silver ribbon. It was doing its best impression of something that would not chew holes in the railbeds and cover the town with a fine patina of river mud. It was “bucolic,” the word the realtors used, convincing us to build here—beneath the trees that never burn, the sky that is ever blue. 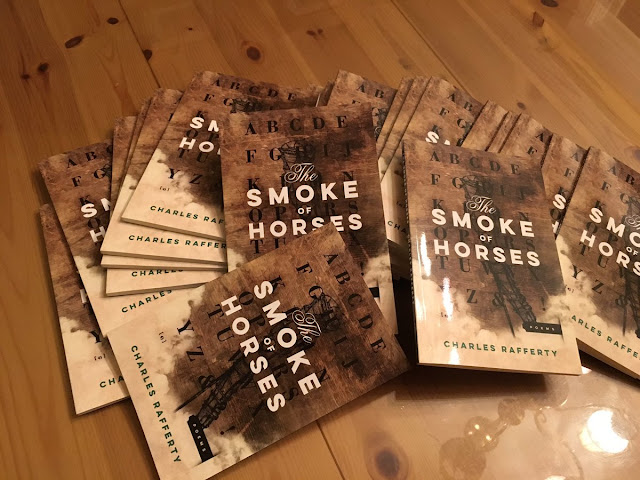 I must say, I’m intrigued by the prose poems of Connecticut poet and fiction writer Charles Rafferty’s latest collection, The Smoke of Horses (BOA Editions, Ltd., 2017), his latest in a line of over a dozen published books, yet the first I’ve spent any time with. While my preference for the form of the prose poem leans far closer to the lyric of poets such as Sawako Nakayasu [see my review of her latest here], Jennifer Kronovet [see my review of her latest here] or Amelia Martens [see my review of her latest here] and others, there is a straightforwardness to Rafferty’s narrative prose poems that is quite appealing. Existing somewhere between poetry and the very short story, the pieces in The Smoke of Horses are short and self-contained, composed as single-stanza meditations and observational poems on multiple aspects of the world as it is, as it might be, and even, possibly, as it should be. While he does lean far closer to the side of the very short story, there is a fluidity to his prose, far stronger than the pointedly-straight (and to my mind, pointedly dull) prose poems of Russell Edson; there is a narrative line, but one attuned to the lyric, equally at home in poetry and short fiction. As he writes in the poem “Two People Kissing in the Park as Seen from a Speeding Train”: “It was that kind of story.”

After the invaders entered the palace, they dragged the great tapestries down. They cut them apart as they called for beer, and the queen was made to serve them without taking off her crown. Later, she gathered up the scraps and took them to the stables so that she might end the shivering of her enemies’ horses.