Shane McCrae, In the Language of my Captor

My grandfather—although I didn’t know whether he would have described himself in this way—was a white supremacist. He wouldn’t have been ashamed to admit that he believed white people were superior to black people—especially superior to black people in particular—indeed, he happily—or, really, “gleefully,” would probably be a better word, since white supremacists don’t ever seem happy so much as gleeful—admitted to this belief many times when I was a child. But I suspect he might have thought the phrase “white supremacist” was too fancy for him. He had been, as a child, the younger brother of a much larger boy, and, along with his older brother Thomas, and his younger brother, Raymond—who grew up to become a landlord, who would eventually be shot through the neck by a tenant he had evicted a few days before, and would die in a soft-top convertible, blood spraying from his neck, his head rolling slightly from side to side on his shoulder as he pointed toward a narrow gap between two dumpsters, wordlessly urging his wife, who was already crawling away from the car, to safety—as a child, he had lived in poverty, in the wake of the Dust Bowl, in Shawnee, Oklahoma. Because of and despite this, he hated “white trash” almost as much—although the hate was a different kind of hate, a sad duty—as he hated blacks, my father especially. (“Purgatory: A Memoir / A Son and a Father of Sons”) 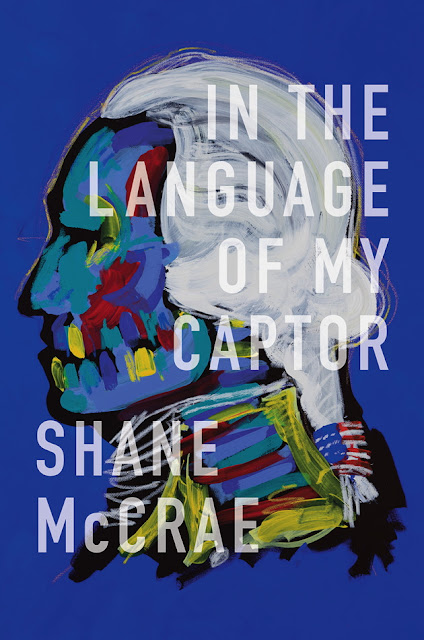 What strikes, beyond the obvious elements, of Ohio poet Shane McCrae’s fifth full-length collection, In the Language of my Captor (Middletown CT: Wesleyan University Press, 2017), are the rhythms of his lines, a cadence that bounces, staccatos, shifts and lifts through and out the other end of an extremely powerful evocation of power and language lost, frayed, betrayed and rebuilt. I am curious to hear how these poems would be read aloud, enjoying the collisions and collusions his rhythms and phrases accomplish. The poems in In the Language of my Captor are centred around racial tensions—cultural, historical and deeply personal— in a book of rage, acknowledgment, inquiry and violence, as McCrae moves between what appears to be memoir and research, articulating a sequence of abandonment, dislocation and systematic racism, and writing a history that is still very much present. As he writes to close the poem “Banjo Yes Recalls His First Movies”: “White folks stay clean / ‘cause how they own you is they own     your options // You can be free / Or you can live [.]”

McCrae’s title is reminiscent of the late Vancouver poet Roy Kiyooka’s own engagement with writing “inglish,” employing his own take of the oppressor’s language as a response to racist attitudes toward Japanese Canadians, and racism in general, while declaring himself very much a presence, as both artist and human. As did Caliban against Prospero, how does one move through the language of the oppressor? Constructed as a book-length suite, McCrae’s In the Language of my Captor is a damned good book of poems, and writes an evocation of what is still so painfully relevant, and desperately required.