12 or 20 (small press) questions with Emily Brandt on No, Dear 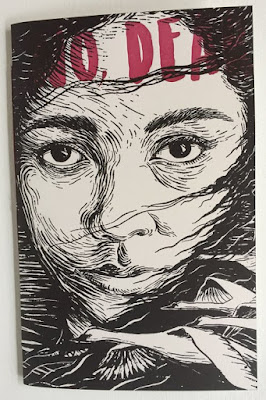 No, Dear Mission Statement:
No, Dear aims to bring together the voices of New York City poets who might not otherwise be in dialogue: both emerging and established poets from diverse backgrounds who are living and writing in New York City’s five boroughs. We aspire to disrupt a field that has historically privileged white patriarchal perspectives by building a publication and communal/critical dialogue that strives to be largely representative of women-identified poets, and poets of color and of all gender orientations.

Emily Brandt is a cofounding editor of No, Dear, Web Acquisitions Editor for VIDA, and the author of three chapbooks. Her poems have recently appeared in LitHub, The Recluse, and Washington Square Review.

When did No, Dear first start? How have your original goals as a publisher shifted since you started, if at all? And what have you learned through the process?
No, Dear started in 2008, and at that time, our goal was just to publish poems coming out of a workshop the original editing team was a part of. That goal quickly evolved to learning about and supporting an ever-expanding circle of poets. Because we have only always published NYC writers, our launch readings have always been and continue to be spaces for poets to get to know and celebrate each other. The poets we publish are our greatest collaborators. We now publish dialogues between issue poets, and host readings co-curated with the poets we publish. We’ve also invited many poets we’ve published to guest edit issues or to submit chapbooks. We are interested in fostering genuine community in a time and place that moves so quickly that community time and space can be a challenge.

What first brought you to publishing?
I wrote and distributed a small newspaper when I was 8, which was significant among my stuffed animal tribe. As an early/mid-adolescent, I was into zine culture, which taught me the art of doing what you need to do and saying what you need to say. As a late-adolescent, I interned for the Favorite Poem Project, which taught me something about the many different roles poetry plays for people. Later, I got into No, Dear.

What do you consider the role and responsibilities, if any, of small publishing?
We can take more risks than big-house publishers, and support more emerging and subversive voices. Small publishing needs to be true to the people who are participating, via writing and reading, in the community. No need to replicate what’s on the shelves at the B&N.

What do you see your press doing that no one else is?
We only publish New York City poets, bringing them together for launch readings, collaboratively curated readings, online dialogues, and more. Focusing on just the local community allows us to build more bridges amongst poets in person.

What do you see as the most effective way to get new books out into the world?
Plan a really good launch and publicize it well. For ND/SA, our runs are small enough that we don’t need to do a ton of work to sell out. We put our efforts to a big launch, some targeted publicity work (reviews/social media), collaborating with the author and their community, and developing and maintaining relationships with our fantastic local bookshops.

How involved an editor are you? Do you dig deep into line edits, or do you prefer more of a light touch?
It depends! For issues, a light touch, for sure. The editorial team and I will sometimes recommend a tweak, but generally publish poems as they are submitted. For chapbooks, it depends on the manuscript. Sometimes we’ll publish it almost as is, and other times we do several rounds of pretty deep revision suggestions. I prefer to publish work that feels polished but not too sheen, and sometimes an editorial eye is needed to get there. I dislike an overcooked poem, so would sooner overlook a few spots with potential for more than push a writer to go into high-sheen revision. That can fuck up a good poem.

How do your books get distributed? What are your usual print runs?
We sell our chapbooks and issues three ways: at launch and other readings, via our website, and at local bookstores, including McNally Jackson, Housing Works, Greenlight, Berl’s, and Quimby’s. We also have subscribers to whom we send issues. At this point, we print 150 copies of each new issue and 100 copies of chapbooks.

How many other people are involved with editing or production? Do you work with other editors, and if so, how effective do you find it? What are the benefits, drawbacks?
For issues, we usually have at least three editors at the table - Alex Cuff and I have usually been two of those people. We’ve had a wonderful range of founding and guest editors over the years, and are thrilled to now have t’ai freedom ford on board as an editor. For chapbooks, we collaborate with Jen Hyde from Small Anchor. I always learn so much from working with a team of editors -- it’s important to hear other perspectives and have your own perspectives challenged. I’ve definitely become a sharper and more engaged reader over the last decade. The only setback is time -- the editing conversations we have are amazing and for me, the most valuable, fascinating part of the process. However, the more voices at the table, the more time spent discussing the poems. That’s a good thing! But also, time is sometimes hard for humans. As for production, most of layout and production falls on the editorial team, but we collaborate with artists for cover images, and welcome help from production volunteers. (Call me!)

How has being an editor/publisher changed the way you think about your own writing?
It’s great reading so much emerging/new work, to balance all the published (new and old) work that I read in books and journals. Seeing everything that comes through makes me even more aware of content and style trends and the ways in which different writers handle those things. I get a clearer sense for myself of what works and doesn’t in a poem, and in what ways what I’m writing may be in conversation with something larger.

How do you approach the idea of publishing your own writing? Some, such as Gary Geddes when he still ran Cormorant, refused such, yet various Coach House Press’ editors had titles during their tenures as editors for the press, including Victor Coleman and bpNichol. What do you think of the arguments for or against, or do you see the whole question as irrelevant?
Do what feels right to you. I have poems in early No, Dears, at a time when our goal was just to publish writing from our workshop and surrounding community. That made sense at the time. I haven’t self-published anything in a long time now, and don’t know that I would again. But I don’t think much of that matters.

What, as a publisher, are you most proud of accomplishing? What do you think people have overlooked about your publications? What is your biggest frustration?
We’ve been doing this for ten years, and it still feels exciting! That longevity is something I’m really proud of. We’ve published so many amazing writers over the last decade, and for some were among their first publications. There’s so many different steps to the process and not all of it is fun or easy, so sometimes I get frustrated with how much time and unpaid labor is necessary to make this all happen.

Who were your early publishing models when starting out?
In 2008, I remember looking at Birdsong, edited by a collective including Tommy Pico, and that gave me hope for making a worthwhile DIY print publication. In the early days, some folks at Ugly Ducking Presse gave me invaluable production advice - at a time when I had no idea how to do anything besides make a scissors-and-glue-and-photocopy zine.

Do you take submissions? If so, what aren’t you looking for?
We do! And we are really interested in good poems that have something to say. Pretty simple. One tip to writers looking to submit: we publish very slim issues, and as such, only print one or a few long poems in any given issue. So unless a long (more than a page) poem is really a perfect fit for the issue, we’re probably not going to take it. We used to limit submissions to 40 lines each poem, but we do like to print the occasional long piece. That said, 40 lines is a good limit to keep in mind.

Tell me about three of your most recent titles, and why they’re special.
Our REPUBLIC (#19) issue: our first post-Trump publication.

Our BLACK POETS SPEAK OUT (#18) issue: the brilliant Mahogany L. Browne used this issue to showcase work from #BlackPoetsSpeakOut, even including a few non-NYC writers.

Chia-Lun Chang’s One Day We Become Whites: after a dozen reads, I still can’t keep up with this chapbook.