Therefore the question “Does God exist” is the wrong question.

The answer for religious and non-religious people is the same: no. God does not “exist,” is an object constructed not according to truth but verisimilitude. A literary truth. What exists, says the philosopher to the children, are relationships between us humans, and also the idea of nothingness. These relationships can be more or less activated; we can think about them a lot, or only a little. Also, all of us can think about nothing when we want to. Everyone can entertain the idea of “nothingness” as easily as they can think about their mother. As easily as they can think about their son. A process is always distinct from its products. But whether thinking about it, imagining it, or refusing to, we’re always in some relationship with this nothing, and so, though God does not exist, it also does not exist, and so God is, if we want to say “is,” always on the side of the sky, with the sky open. (“Objects from a Borrowed Confession”)

Denver poet Julie Carr’s latest is Objects from a Borrowed Confession (Boise ID: Ahsahta Press, 2017), a collection that explores the form and arguments of confession, the intimate and “confessional poetry.” Through a blend of forms, Objects from a Borrowed Confession weaves poetry, memoir and critical prose to compose a lyric essay on the very nature of confession itself, as she writes to open the “Author Statement” that accompanies the press release [the full version of which is also available via the Ahsahta Press web page]:

The works in Objects from a Borrowed Confession have been written over a stretch of approximately ten years, in and around the writing of various other books of poetry and prose. They all share a common obsession with the theme of confession. I became interested in this theme partially because the term “confessional poetry” carried such negative connotations when I was “coming up” in poetry, even as poets considered “confessional,” especially Sylvia Plath and Adrienne Rich, had been so important to me as a young writer. The situation was similar to being a hard-core punk kid while sometimes listening to Joni Mitchell in my bedroom. I wanted to think about what the Language Poets and the Conceptual Poets had against “confession,” but I also wanted to see why confession was so important to our broader culture. Obviously, in the age of Facebook and the memoir, everyone is a confessional poet, and I wanted to explore that impulse and the attraction we have to one another’s secrets. On a more philosophical level, I wanted to understand what the act of confession has to do with intimacy, empathy and subjectivity. 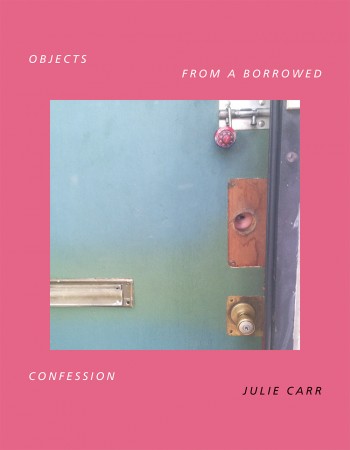 Through ten sections, Objects from a Borrowed Confession exists as a curious meeting point between the works of New York poet Rachel Zucker and American non-fiction writer Sarah Manguso, composing a conversation illuminating what it is about “confession” that seems so frightening, and easy to dismiss by both writers and readers alike. Thick as a thesis, Carr’s lyric, ten years in the making, is perfectly timed, given the shifts in memoir-writing, non-fiction and, quite pointedly, the “confession,” via writers such as Manguso and Maggie Nelson. In comparison, Objects from a Borrowed Confession retains a strong foothold in poetry, and might even be better to compare to Jasmine Dreame Wagner’s more recent (and quite remarkable) On a clear day (Ahsahta Press, 2017) [see my review of such here] (or even works by Sue Landers and Susan Howe). As Carr writes: “I confess here and now to liking the shape of my own lips as they enact / the future of feeling on a minor scale my focus as narrow as my ambition is grand but these are / ideas we have encountered before so perhaps it’s time to alter my font?”

Highlights abound, but I’ll point out the book’s penultimate section, the three part “By beauty and by fear: on narrative time,” in which her prose ebbs and flows like water, utilizing quotes and rhythmic pauses to explore how narrative time, itself, ebbs and flows, as a microcosm of the book as a whole. We need far more of these, still: fiercely smart books engaged with the world and composed with the whole head, and whole heart. As she writes as part of part two of that same section, “NAME”:

That verb “befall” hints at the crisis that circles the act of naming. The verb dates back to Old English (897), and seems to have meant simply “to fall” until the 12th century where it begins to also mean “to inherit”—which is certainly one of Blake’s meanings here. But as I search the OED I find that almost all instances of “befall,” where it takes an indirect object (“thee”), indicate an inheritance that is bad or dangerous—that will leave its object worse off, not better.

“I do not know what it gives,” wrote H.D. of the “jewel” vibrating at the center of her poem “Tribute to the Angels”: “a vibration that we can not name, // for there is no name for it; / my patron said, ‘name it’; // I said, I can not name it, there is no name” (Trilogy 76). Patrons, kings, queens—need things named. Poets, though they trade in words (or because they do), recognize and defend the unnameable core that burns.

Before named, the infant of Blake’s poem is pure happiness. Language can’t even organize itself correctly around that happiness (I happy am). But once named, once “called,” it suffers a fall, one could say, into narrative. No easy opposition, then, between the fear of no narrative and the comfort of having one. Because as soon as you begin to tell yourself, something of yourself is lost. And not all narratives, dear mothers and fathers, dear children, end well.