Usurping the feelings of others—
Creating the event—

Sick toward whom—
Creates the event—
Anguish to him—

Some are
Overthrown by it—

He visits—
Escapes it—

So say now the
Said it—

The author of two prior poetry collections and a memoir, American poet Katy Lederer’s latest collection, The bright red horse—and the blue— (Berkeley CA: Atelos, 2017), could also be considered her first, given the bulk of the collection was composed in the mid-1990s, well before the publication of Winter Sex (Verse/Wave Books, 2004), The Heaven-Sent Leaf (BOA Editions, 2008) and Poker Face: A Girlhood Among Gamblers (Crown, 2003). In the “Afterword” to the collection, she speaks of the original composition of the work, and her eventual return to the manuscript:

Three years ago, after having my children, I felt a strong urge to organize my life. The poems from my twenties had been transferred from one computer to another, placed willy-nilly in documents and emails, and many had become impossible to access. I decided it was time to gather everything together in one place, and, in the process, I rediscovered the poems here. Over the course of several days I worked to revise them. I could finally see them for what they were, which were beseeching lyric prayers: fierce, sad, quizzical, angry, tender, and bereft, and I wanted to release them from their blocks into an open form. I was no longer the frustrated young woman who composed these complex poems, and I felt for her, her pain and rage. I also admired her, the powerful muscularity of her music and the sophisticated raiment of her dashes, which, to me, represent so many things: parries and thrusts, bars (as in a prison), invitations, suffocations, breaths, and lashes of the heart.

When I first showed the series to Lyn [Hejinian]—twenty years after she and Travis [Ortiz] had asked for a book; twenty years after I had composed it—she commented that the poems read as “in the beginnings of emotion.” This was a beautiful characterization, generous, sunny, and loving. But I believe that in fact the series exists at the end—the end of pure emotion, of youthful innocence and love. They are the record of a heart being broken. I remember then, when I wrote the poems here, not comprehending the transformation that was happening to me, unaware that I would never be the same. And I recall a few years later, once the passion had abated, understanding, finally, that ubiquitous expression: “a broken heart”; like a horse that has been broken. After that first heartbreak, one is, in some sense, mastered—by the knowledge of and avoidance of pain, and by the empathy for all the other people in this world who have been broken. 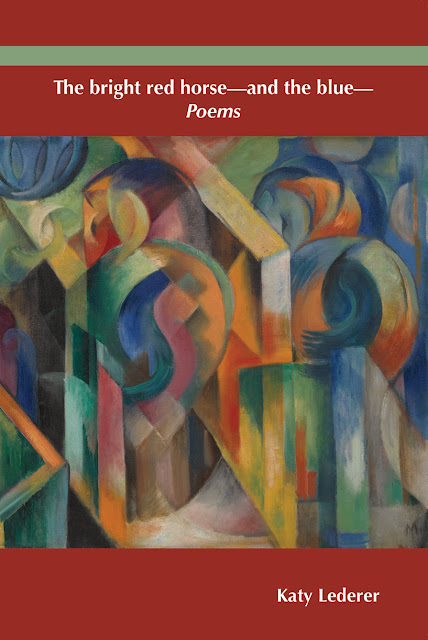 The staccato of the short-lined poems is interesting, deliberately breaking a lyric rhythm in such a way as to become a rhythm in itself, and provide a curious counterpoint to the work she’s produced since, exploring the possibilities of the space of the lyric sentence. In comparison, the poems in The bright red horse—and the blue— exist as single, extended thought-structures, broken up through the staccato of the line break and em-dash, which suggest both the aside and continued narrative line. What becomes interesting, as well, is to see how Lederer’s trajectory might be impacted upon moving through a manuscript from such an earlier period in her own work. Might her writing in the months and years ahead remain in the same series of directions, or might this engagement with her juvenilia (so to speak) create a blending of forward-and-back into some other kind of aside?

Posted by rob mclennan at 8:31 AM
Labels: Atelos, Katy Lederer