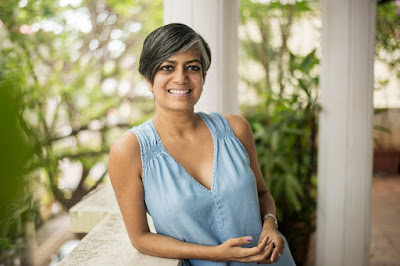 Ayesha Chatterjee’s poetry has appeared in journals across the globe and on the official website of Canada’s Parliamentary Poet Laureate, George Elliott Clarke. Her second collection, Bottles and Bones, is new from Bayeux Arts.  She lives in Toronto.

1 - How did your first book change your life? How does your most recent work compare to your previous? How does it feel different?
My first book, The Clarity of Distance, changed everything! Suddenly, I felt that I could confidently call myself a poet, because I had a tangible book in my hot little hands as proof. I could apply for membership at—and was accepted into—the League of Canadian Poets, which was hugely exciting to me. Clarity was also my ticket to reading at IFOA’s 2012 Battle of the Bards at Harbourfront Centre. That was my first ever poetry reading in Canada—how cool is that? Bayeux Arts, the Calgary-based indy press that published Clarity, has also just published my second collection, Bottles and Bones. I feel as though my work has become more expressionistic in the six years since Clarity, a little more abstract, but that could just be me. The lead-up to publication has been a bit terrifying, to be honest. A first collection is pure joy to have out in the world, especially for someone like me, who was a complete unknown in Canada, having arrived in this country just a year before The Clarity of Distance was released, and not having had anything at all published in Canada previously. This time around there are Expectations. Or something. But it’s out now and I’m giddy again with excitement, because now it will take on a life of its own, really.

2 - How did you come to poetry first, as opposed to, say, fiction or non-fiction?
I’ve been writing poetry since I was about nine years old. It’s the genre I write in most naturally. I’ve tried writing fiction. I wrote a whole novel over five years and found it very painful to write. I only realised why it was so hard to write after I finished it. It was because I’d approached it like poetry, which didn’t work very well in this particular case.

3 - How long does it take to start any particular writing project? Does your writing initially come quickly, or is it a slow process? Do first drafts appear looking close to their final shape, or does your work come out of copious notes?
It kind of depends on the poem. Sometimes a poem almost writes itself and other times it takes a few days for it to form. My first drafts ARE my notes. I start with whatever (sometimes rubbishy) thoughts I’ve jotted down on paper and then edit and edit and edit them down. Most of my poems are very short and what you’re seeing is often maybe a third of what I started out with.

4 - Where does a poem usually begin for you? Are you an author of short pieces that end up combining into a larger project, or are you working on a "book" from the very beginning?
It has always begun with a poem. And a poem can begin anywhere, with an image, a line or an idea.

5 - Are public readings part of or counter to your creative process? Are you the sort of writer who enjoys doing readings?
I enjoy being in front of an audience and reading my poems to them, it’s intoxicating. But the lead up is a little scary, like stage fright. Which is a good thing, because it means I always prepare in advance. My creative process isn’t really affected by public readings. In my head the two things are unrelated, almost. I write for an imaginary reading audience (myself, usually, and I’m hyper critical), not a listening audience. What I find difficult is writing in a group, because, invariably, I will write specifically for them, which can be counterproductive, because it’s not always truthful and that’s dangerous.

7 – What do you see the current role of the writer being in larger culture? Does s/he even have one? What do you think the role of the writer should be?
If I thought my writing might influence culture at large, I wouldn’t be able to write a word, I’d be a complete blank. Speaking only for myself, I write in the hope that my poems will get readers to stop and look at their world differently, even if just for an moment, or will resonate with them in some way. That’s cliché, I know, but it’s the truth. It’s what good poetry does for me and I’d like to give some of that back to the world.

8 - Do you find the process of working with an outside editor difficult or essential (or both)?
Both. It’s absolutely essential to work with a good editor in terms of objectivity and to tighten your work, but I sometimes find it very difficult to translate good advice on a working draft into good poetry. Not always, of course, and then it’s magic!

9 - What is the best piece of advice you've heard (not necessarily given to you directly)?
“You gotta have a dream, if you don’t have a dream, then how you gonna make a dream come true?” From the South Pacific song ‘Happy Talk’ by Rodgers and Hammerstein.

10 - What kind of writing routine do you tend to keep, or do you even have one? How does a typical day (for you) begin?
I write best in the mornings, when my head isn’t yet filled with all the day’s distractions. I try to carve out three mornings a week to write. I’ve got a little writing nook with a secretary desk at right angles to a window that looks out onto our patio so I can see it when I turn my head. I usually start at around 9am after I’ve had breakfast and my second cup of coffee, and I’m there till lunch.

11 - When your writing gets stalled, where do you turn or return for (for lack of a better word) inspiration?
Music. Especially jazz.

12 - What fragrance reminds you of home?
Oh my goodness, what a perfectly timed question! Bottles and Bones is all about fragrance and the sense of smell or lack thereof. And the very last poem in Clarity, called Physics, mentions exactly that—petrichor, the fragrance of rain on dry earth. In India, there’s a perfume distilled to mimic it. It’s been made for thousands of years and is called "mitti attar” or attar of earth.

13 - David W. McFadden once said that books come from books, but are there any other forms that influence your work, whether nature, music, science or visual art?
I often say that I write poetry because I can’t draw. Visual art is a strong influence as is music. I used to want to write a musical. Maybe I still will someday.

14 - What other writers or writings are important for your work, or simply your life outside of your work?
Emily Dickinson is probably my biggest influence. Also Thomas Hardy, Robert Frost, Jo Shapcott, Elizabeth Bishop, James Joyce, Virginia Woolf, Kamala Das, Alfred, Lord Tennyson.

15 - What would you like to do that you haven't yet done?
Write that musical, now that you’ve reminded me.

16 - If you could pick any other occupation to attempt, what would it be? Or, alternately, what do you think you would have ended up doing had you not been a writer?
I can’t think of anything else I’d rather be. Honestly. This is what I’ve wanted my whole life.

17 - What made you write, as opposed to doing something else?
I don’t feel as though I had much choice in the matter. Writing is like an addiction. If there’s a long period of time where I’m not writing, I start to feel increasingly uneasy, even guilty, and writing is what gets me back on an even keel.

19 - What are you currently working on?
Promoting my new collection, Bottles and Bones.

Posted by rob mclennan at 8:31 AM
Labels: 12 or 20 questions, Ayesha Chatterjee, Bayeux Arts

True that, Mitti Attar reminds everyone to home back in India. The scent from the dry earth turning wet after the first rain of monsoon hits back to everything natural about India.