My friend, the writer, gardener and early childhood educator Clare Latremouille, otherwise known as Olivia McDonell, or Olivia Clare Latremouille-McDonell, has died, after an extended and repeated battle with cancer. Clare had multiple names over the years, born as Olivia Clare Latremouille, known as Clare Van Berkom by the time we met her in high school, a few years older than the rest of us, with four-year-old son Noah in tow. She was already writing by the time we met her, which further encouraged some of those early attempts by the rest of our small group. It was her fifth time in high school, and even her second in ours, Glengarry District High School in Alexandria, Ontario, as she lived with and then near her aunt and uncle in town. At the time, we even joked that of course she was co-valedictorian when she graduated; she’d had so much more experience being in high school than the rest of us. By the end, she’d had some of the highest marks in the province. She was older, smarter and bolder than the rest of us, with experience we couldn’t even imagine. She was smart, fearless and revelled in silliness; she was brilliantly talented, and seemingly all over the place, expertly moving from one expertise to another. She was even a winner of Carleton University’s high school writing competition during her final high school year, part of a long run of winners from our school, nurtured by our endlessly-patient English teacher, Mr. Robert MacLeod (I won the following year for fiction). She loved children, even running a home daycare for a few years during their time living in Ottawa’s Hintonburg neighbourhood, before attending further school to be able to work as a Registered Early Childhood Educator through the Ottawa Carleton School Board. She lived in such a state of joyful openness. Of care. She was always the first to make sure everyone in the group was taken care of, attended. Made sure you had some food. A beer, maybe. The door was always open. You could always drop by. She had multiple names, even to the point of, eventually, multiple library cards, whether under her maiden name, or either of her married names. So she could borrow seemingly unlimited stacks of simultaneous books. During their years in Ottawa, she always knew the best thrift stores, and visited them daily. If you were seeking out Clare, there was a run of years that you could just go to the St. Vincent’s on Wellington Street West, any day of the week. There was thrift store where the owner would always provide Clare with baked goods, hidden under the counter. Another, she always knew which staff member would give her the better deals. She knew the schedules of new clothing, new staff, new furniture deliveries. She had trunks filled with toys, costumes, musical instruments, library books and just about anything else you could think of, only some of which related to their running the daycare. She was always collecting, adding or repairing. Once they moved out to the farm, she and Bryan managed and maintained a seemingly-endless garden, and even had a pair of horses, which delighted our young ladies. 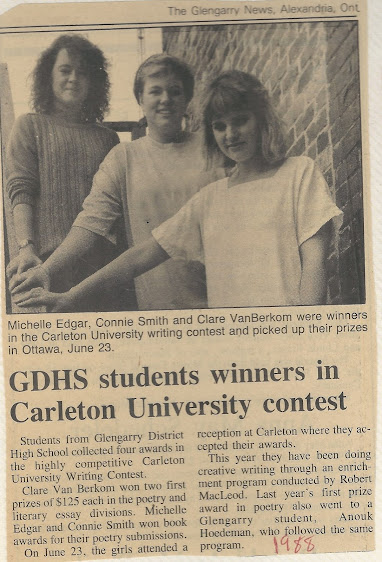 We had numerous adventures, more than I could ever recall. Clare and I once climbed up a hill in Kamloops, as I was nearly struck by lightning. We sat up all night with Tom Snyders and Gerry Gilbert in Tom’s Vancouver warehouse, as Gerry danced a jig on the rooftop watching the sun rise over the mountains. That same trip, July 1997, Clare and I landed on George Bowering’s doorstep with a song in our hearts and a handful of six-packs. George ordered pizza; Clare made a salad. We started an informal writers group gathering in the late 1990s, a gathering that evolved into The Peter F Yacht Club, which originally met over drinks to discuss the possibilities of writing, and what we’d been working on (although a lot of those early sessions lapsed into silliness). She gifted me a bowling ball for one of my thirtysomething birthdays, and we repeatedly rolled it down the length of the Carleton Tavern (at least, until the staff stopped us). We sang “To Sir, With Love” loudly over the phone from the Atlantic Hotel Tavern in spring 1989 to Mr. MacLeod, having called him, both collect and anonymously. He knew it was us. We sang songs loudly off Ottawa International Writers Festival hospitality suite balconies at all hours (once convincing Paul Quarrington to join in our singing of Saturday morning cartoon theme songs), inadvertently causing the festival to be barred from multiple downtown hotels. As one of the organizers overheard an elderly couple complain to the front desk about the noise the next morning, they added: “But they were such good singers.” The Monty Python albums she would play loudly and repeatedly in her apartment in Alexandria, ever prompting Noah to sing along. I remember Noah’s fifth birthday party, and the Creedence Clearwater Revival cover band she wanted to follow around that summer. I remember her fortieth birthday party on Armstrong Avenue, when Noah was twenty-two. Or the party that centred in their front room, having convinced AJ Dolman to play Clare’s accordion, given their admission of lessons as a child. Clare had more musical instruments than just about anyone. We had our guitars, but still picked up her trumpet, her bongo drums, a ukulele. When they drove from Kamloops to Ottawa in the 1990s, having left the café they’d established there, Magpies, not everything they owned could make its way east, but Clare’s mannequin, naturally, was carefully strapped onto the U-haul.

“The last of the living Latremouilles,” she called herself. Except for that distant cousin, the long-time Vancouver radio dj (but we didn’t talk about him). I’ve a stack of photographs from when Clare and I ran through our high school, attempting to convince various of our teachers to pose with the nose glasses we provided (most said yes; at least one sternly but politely refused). I once borrowed her jean jacket so I could look cool, as a group of us made for Montreal for a Peace Concert at the Montreal Forum in 1987. The illustration she made of our pre-concert group in the park, drinking beer and playing guitar with a few dozen others, made its way onto the cover of the zine we invented as part of our high school “writer’s craft” class: assembling poems, stories, drawings. All of it published anonymously, of course. She could fall helpless into fits of giggles, including when dancing at the Carleton Tavern somewhere in the 00s, realizing her friend Joy’s dancing had caused Joy’s pants to fall off, without them noticing. There was an element to our pairing that rendered chaos, a joyous silliness that not everyone else had patience for, akin to six-year-old twins: each encouraging the other.

I published some of her poems in the first issue of my long poem magazine, STANZAS, in 1993, and in a chapbook, not that much later. She’d been working on a poetry manuscript she’d titled “Naked,” some of which sits in a file on my computer. The poems from STANZAS, her “Garden” series, that later fell into her novel, The Desmond Road Book of the Dead (Chaudiere Books, 2006). As the first of the series, “Garden,” reads: 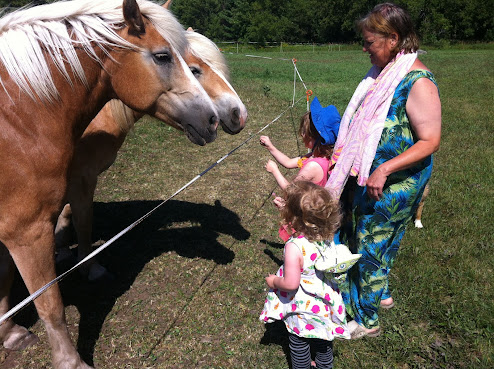 In August 2019, the last time I saw them, not long before Covid: an afternoon visiting Clare and Bryan on their farm in North Glengarry, a few miles east of the McLennan homestead, as my young ladies admired their two horses, and later accidentally stomped on a hive of bees at the end of the yard. At least we discovered neither young lady allergic, once they both stung. Clare offered them colouring, toys. They played a football game on the porch, and she delighted in them both.

How am I supposed to experience a world that Clare Latremouille no longer occupies? I shall have to be attentive enough for the both of us, I suppose. I shall have to be silly enough. An image in my head of the remaining members of Monty Python at Graham Chapman’s graveside, the first of the troupe to die: every one of them standing with pants at their ankles.

Condolences to her husband Bryan, sons Noah and Sam, her whirlwind of cousins and anyone else who was fortunate enough to fall into her orbit. I look forward to the stories still to come. I suspect they are many.

Posted by rob mclennan at 8:31 AM
Labels: Clare Latremouille, obituary

Thanks for this Rob

I am sorry for your loss, rob, beautifully drawn in your lively eulogy, rich in detail and in love, the very best kind of eulogy. My condolences to her family and friends.

From one of the 'whirlwind of cousins', thank you very much, Rob. This brought back so many memories, and captured Clare so beautifully.