Driving, alone, at night, with music
Is safe. No visible stars.
A blood orange moon and then Mars.

Lying, in bed, alone, is safe.
Keep your hands clean,
You can touch your own face.

Everything comes back normal.
The image of the aster,
It’s all in mental space.

How sublime the moon.
How sublime, the mossy ruins.
The fear and the fear itself. 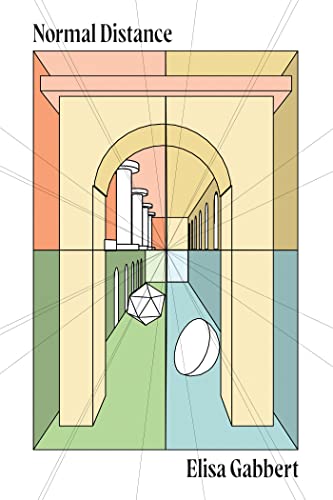 American poet, critic and essayist Elisa Gabbert’s [see her 2016 "12 or 20 questions" interview here] latest poetry title is Normal Distance (New York NY: Soft Skull Press, 2022), following The French Exit (Birds, LLC, 2010), The Self Unstable (Black Ocean, 2013) [see my review of such here] and L’Heure Bleue or The Judy Poems (Black Ocean, 2016) [see my review of such here]. Given her last few years have been moving further into the realm of non-fiction, having published the essay collections The Word Pretty (Boston MA: Black Ocean, 2018) [see my review of such here], The Unreality of Memory & Other Essays (FSG, 2020) and the forthcoming Any Person Is the Only Self (FSG), the appearance of a further poetry title, returning to a particular leaning of form, is both exciting and intriguing. It is also a bit of a relief, admittedly, as numerous who venture across the boundary of poetry to prose so often do not return (or return further down the road, less sharp in the form than they once were).

Gabbert’s meditative lyric, one simultaneously easygoing and highly crafted, has always leaned into more narrative forms, with her two compositional strains sitting on either side of a seemingly-arbitrary boundary: the “essay-poems” of her poetry collections on one side and the “essay-prose” of her non-fiction works on the other. As her essays more straightforwardly articulate the feeling out of a particular argument, her poems, in their way, narrate more of a short-form of her thinking, displaying a larger lyric across a wide canvas, providing direction enough that the spaces between can be perfectly navigated. As the first half of her opening poem, “Prelude,” writes: “Every year, when the lindens bloom, I think of the year / when the lindens didn’t bloom. // This year, so far, the lindens haven’t bloomed. // I think of the year when the linden didn’t bloom. // An idea almost comes, or it comes in disguise—it’s the / same old thought, but today it is startling. // The way you fail to see, or recognize yourself, in a mirror / at strange angles. // Thoughts almost arrive.” She writes of distance, of memory and of fear, subject matter that runs through, whether overtly or underlying, seemingly through the length and the breadth of her published work. She writes of perception, striding along the boundary between utopia and dystopia, and the possibility that that may or may not be all that there is. There is such a fine pacing to her lines, allowing for enormous amounts of space between lines, between thoughts. One step and one further step, allowing the ideas to connect themselves in the spaces between, and throughout. In this way, she tells you directly what she does not say, if you are open to hearing it. As well, there are moments as though her writing can see into the future, attempting to explore, fully, each particular direction. “Sometimes the dystopia was boring.” she notes, towards the end of the six page poem “New Theories on Boredom.” “At least everyone was boring at the same time about / something inherently interesting. // Sometimes it feels like if I’m not fascinated, I’m bored.” Or a fragment of the three-page poem “I’m Not Mourning (There Is Voids),” that reads:

In the mourning journal he wrote in the months following his mother’s death in 1977, Roland Barthes quotes Donald Winnicott: “The catastrophe you fear will happen has already happened.”

Less than three years after his mother, Barthes died from injuries sustained when he was hit by a laundry van while walking through the streets of Paris.