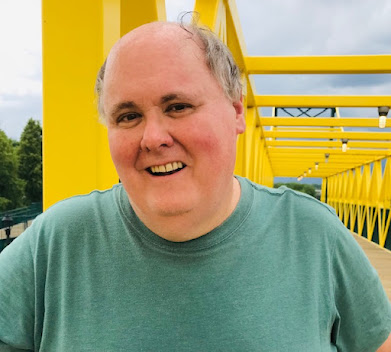 Garin Cycholl’s 2022 novel, Rx, is a play on The Confidence-Man, a man practicing medicine without a license in a Dis-united States. His recent work has appeared in The Typescript, ACM, and The Dead Mule of Southern Literature.

My first book was an unpublished novel from the mid-1990s, The Kerry Way and the Pentecostal Counterculture.  It was a local exploration of the shifting political tide in the United States and the pervasive influence of whatever Christianity has become, set in rural Missouri.  I’ve never been able to finish it.  The book taught me that I have to work slowly and deliberately.  That experience helped the development of Blue Mound to 161, my first book-length poem.  The more deliberate pacing gave me time to invite more historical strands into the narrative as well as more space in which to re-imagine the work’s larger shape.

I always say that I’m a novelist disguised as a poet.  I like to work within an epic impulse—long poems that explore trajectories in American history and culture, blowing the local up and rethinking connections.  It’s what Charles Boer called the “annalic” impulse—working with a story that’s both epic and local in scope, while recovering the mythic qualities of figures in personal and common memory.  It propelled his great book, VarmintQ.

I’m a sentence-writer, so it’s a laborious process.  A friend compares it to being a stone mason building a wall.  You pick up one stone after another, examine their shape and re-imagine their place within the wall.  You have to fit them in a process of trial and error to get the thing built.  The editing challenge is that often I’ve worked so long on some sentences that it’s difficult to shed them in the revision process.  I need a grade-school English teacher around to slap my knuckles.

Lyric poems (and short stories) tend to be diversions when I’m stuck within a longer project.  I typically want to follow the fuller line of an idea.  I get distracted too easily as a writer.  I wish I had more of that obsessive impulse that carries projects to completion.  For instance, for years I’ve been piecing together a novel about a Thoreau ancestor who lives in a high-rise condo above the Lake in Chicago.  He keeps getting distracted from the Lake though, more focused on the microbes crawling through his colon.  Psychologically, I guess it’s a figure of my writing process that emerges there.

Readings can be fun, although the hierarchy that can be inherent in a lot of readings is annoying.  I prefer reading with others “bluegrass” style, trading licks one poem or paragraph after another, focusing on the writing rather than the voice.  I think that in jazz Ralph Ellison called it “antagonistic cooperation.”  More of a conversation than “I liked your poem.  Now what do you think about my poem?”

I was a kid in the Nixon era so the shifts in American (writ large, in the sense of the Americas) politics are both horrifying and fascinating to me, the anxieties and narratives that late capital feeds on.  I grew up listening to a lot of distant radio (particularly from New York, Detroit, and Toronto), so I’m curious about the relationship between geographical space and culture there.  In school, I’ve tried to develop a grasp of the range of political developments in Latin America across the past decades.  In the United States, politics has devolved into root points of identification, often more about anxiety and psychological stasis than polis.  At present, I’m wondering if the whole Trump phenomenon simply reflects not only a racist impulse in American culture, but the situation of American men who felt ambiguous feelings or even outright hatred from their fathers.  That hatred offers a terrifying point of identification.  How else does one understand the “sons of Trump?”

Kurt Vonnegut once wrote that the communal place of writers was to recall and retell the common stories.  Of course, writers have been displaced in contemporary culture by other “tellers”—TV, Hollywood, and now, streaming services.  Vonnegut claimed that this situation left writers with only one place in the culture—getting drunk at weddings and dancing on tables.  I gravitate towards that communal role.  It’s seems essential.  I’m continually amazed by the great writers who offer a means of re-imagining the world around me—writers like Rebecca Solnit, Ed Roberson, Dan Egan, Cecilia Vicuña, and the late Muriel Rukeyser.  All writers who remind me about the “roads that lead back into my own country.”

I’ve rarely had challenging experiences with editors.  Work always feels like “another rough draft” to me, so it’s generally an easy process to embrace revisions.  That said, I feel funny asking friends, “Hey, would you give this a read and let me know what you think?”  Great readers are perhaps even more rare than great editors.

Michael Anania: Great writers rarely appear by themselves; they more often appear in groups.  His words and teaching have fostered a generous, collaborative spirit in workshops and friendships.

I need to work between poetry, fiction, essay, and script as a means of working out challenges and impasse in projects.  Script-writing has influenced the way in which I imagine characters.  Narrative forms have impacted my sense of lyric play in poems.   Adaptation between genres has offered me a means of revision.  Translation offers a means of inhabiting someone else’s thinking.

A great deal of my work gets done in the margins and back pages of books.  I string together sentences and paragraphs in those spaces as a means of starting more sustained pieces.  That process generally avoids the dread “blinking cursor” for me.  I used to write a lot in the early mornings, but that time has generally been absorbed by teaching online.  I miss that open space.

I’ve been fortunate to avoid prolonged stalls by moving between genres.  If I’m stuck on an essay or fiction, I’ll work on a poem or review.  Reimagining fiction passages as scenes on stage or screen helps, too.

Maps, memory and place.  The Illinois poems (Blue Mound to 161, Hostile Witness, The Bonegatherer, and the forthcoming prairied) all get their impulse from one stretch of road or another.  I traveled a lot by car and those glimpses from the windshield (and the parallel mapped lines) are always close at hand.

A socio-cultural or political biography of a Chicago figure.

I worked in pastoral ministry and Hospice chaplaincy for twenty years before moving solely into teaching and writing.  I enjoyed the range of that work—maintaining a communal center, counseling, teaching, and of course, getting some time each week to say what was on my mind.

My only means of making sense of things.  I would be loathe to give up the conversation in reading and writing.

I really loved Meghan Lamb’s Failure to Thrive.  Really strong Rust Belt storytelling.  In terms of poetry, I was struck by Ed Roberson’s To See the Earth Before the End of the World and Sylvia Legris’s Garden Physic.  Also, I recently watched Cecilia Vicuña’s films in the retrospective on her work at the Guggenheim.  Short pieces on quipu knots, sound, and seashore.

A review of Vladimir Sorokin’s Telluria, holy war and hallucinogens in post-Putin Russia.  I’m also trying to find traction on a Chicago mystery and some love poems from a surveilled city.