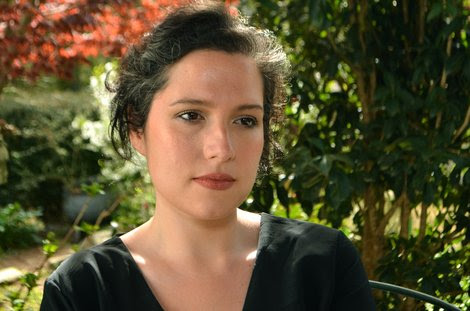 Laura Jaramillo is a poet and critic from Queens, New York living in Durham, North Carolina. Her books include Material Girl (subpress, 2012) and Making Water (Futurepoem, 2022). She holds a PhD in critical theory from Duke University. She co-runs the North Carolina-based reading and performance series Paradiso.

My first book Material Girl didn’t change my day-to-day life much because I was a broke grad student when it was released and couldn’t do much to get the word out about it, but over time, the book found its audience and connected me to other writers and thinkers who I eventually felt I was writing with and for. Material Girl now feels like a digest of my influences at the time, a very New York School inflected-book about living in New York, montage-y, talk-y poems. I think my new book Making Water tries to make a new form, one that is maybe less inherited and more my own. My poetics up to now have been grounded in geographical place, and I wrote Making Water while living in North Carolina, which is a little bit urban, a little bit rural, and a little bit suburban all at once so I wanted to write something that really reflected the experience of moving through this new swampy viney parking lot-filled landscape. I think there’s an idea from people who live in major cities that moving to the south is giving up on being part of culture, or something, but what I found in living here was that having more time and space for study gave me the capacity for an expansiveness to my writing that I has lacked living in cities. I reflect on this in the new book: “Give it up for space // transmuted into time // By year three // Memory will become // Imagination tall as // loblolly pines

When I was teenager, I liked the spoken word tracks on punk and riot grrrl albums, and the emotional screeds in zines, and poetry seemed like the closest form to that so I started writing it. Poetry has always just felt the right amount of flexible for me in the sense that I can use so many different voices and different materials in poetry. And also, poetry never feels unrelated to “non-fiction” to me. There’s a way that a poem has to be “true” to work even if the poem is totally abstract or fictional, and that sense of intuitive truth value has been a guiding principle in my writing across genres. Fiction, on the hand, has just always seemed like an impossible amount of infrastructure to manage.

I take notes for years and look for patterns in the notes and those notes congeal into poems. Once a few poems are drafted, I start to poke around and see whether there is a conceptual foundation for a book. Once I feel like I am speaking to a specific set of questions, then some of the poems compose themselves in my head and some are works of obsessive revision. The initial process of shoring up the foundations can take me three to five years and then the end stages of drafting and editing takes a year.

I am working on a book from the beginning, even when I try to write one-off poems, it almost never works, it always turns into a series and the series expands into a chapbook or a book. I feel that whether I consciously embrace it or not, I am always kind of in the vicinity of the long poem tradition.

I consider readings one of the most valuable tools for editing and shaping my work, both in terms of listening for the parts that are getting the audiences’ attention and where there are disconnects, as well as conversations that spring up after readings. When a reading is organized in a manner that makes readers and listeners feel welcome, they’re one of the rare opportunities for intellectual exchange and connection in what I feel to be an otherwise hyper-atomized U.S. literary landscape. Readings are kind of democratizing because you can’t hide behind prestige or credentials–the audience is with you or they’re not.

My work is animated by roughly two theoretical concerns which are more like infinitely generative questions that never get fully answered in my work and often overlap. The first question is how can I write sensation when our sensoria are constantly changing through technology, trauma, historical change, etc.? Gender is very central to this aspect of my writing–I am perpetually writing from the porosity of the female body. The second question that I am constantly circling is: how do we sus out reality in a world of images? The problem of images is that there is much pleasure and so much illusion in them, so the question of what the feeling of reality is under those conditions interests me.

I find it interesting that lots of young people still want to be writers despite a vanishing readership for literature and the destruction of literary infrastructures through austerity politics, so there seems to be some drama that the role of “writer” is playing out in the culture, but I couldn’t tell you exactly what it is. A great mystery of our time.

I have never worked with an outside editor but I would welcome the chance. There is too little editing in contemporary U.S. poetry! Too few critics and too few editors.

“Don’t process it too much”

10 - How easy has it been for you to move between genres (poetry to cultural criticism to film/media writing)? What do you see as the appeal?

I wrote poetry first and criticism much later, but learning to write scholarly critical prose and also film criticisms for a newspaper made me a better poet. The act of learning to describe films concisely made me sensitive to how easily visual description becomes overwhelming for the reader. So now when I write poetry, I have an even more urgent sense of “ok, let’s make every word on the page count!” Visual description is both the precursor to any critical observation and the basic unit of building “the world” of the poem, so I am pretty obsessed with this slippage between description, world building, and critique.

I only have a set routine when I am very close to being done with a piece of writing. Otherwise, there is no routine to speak of. My writing is sporadic and woven into my day or chunked in however it fits at any given time.

Although it’s a bit embarrassing, my high school love of T.S. Eliot endures and whenever I’m stuck, I go back to Eliot, especially “The Wasteland.”

A specific ratio of gasoline to earth reminds me of one of my former homes, Bogota, where my family is from.

Photography, film, visual art, fashion tend to be at the center of my writing. I grew up in a family of photographers so it was expected that I would also be a photographer but instead I am a visually driven writer.

Though I’ve never thought of becoming a fiction writer, reading fiction is incredibly important to me and to this day the most relaxing thing I can think of is having nothing to do except read a massive nineteenth-century novel. When I was a kid my parents would send me to Colombia to visit relatives every summer and I did nothing but read so the deep absorption in big novels like Jane Eyre, Les Miserables, In Search of Lost Time probably really shaped my sensibilities as a person and as a writer.

If I wasn’t a writer, I’d be an interior decorator or a make-up artist.

The two last great books I read were Akilah Oliver’s Flesh Memory: The She Said Dialogues and Karl Larsson’s Form/Force. The last great film I saw was American Honey (2016) by Andrea Arnold.

I am currently working on several things: a manuscript that will be a diptych with Making Water, tentatively titled Burning Sequence, which is loosely about post-9/11 American culture and the pandemic. I am also working on a book of essays about the decline of Colombian cinema during the War on Drugs. The essays blend my family’s stories, my own experience as a diasporic Colombian, and key moments from Colombian film and television history to narrate how the war psychically shattered the country. I am also writing a suite of bilingual sonnets culled from classical and modern Baroque Spanish-language texts called The Cannibal Sonnets.