The peacock’s spurs are caught again
in the diamond chickenwire of his low
slanted pen. Nobody bothers anymore
to hammer the sagging barn.

Summer visitors regard the old farm from cars
without chrome, up on the hastily paved path—
if they look at all. There’s so much
else to see, burnished things, and battlefields

all look the same. But it’s here, this land,
where the war’s easy sepia finds an end
and a form: like us, the shallow rust-red soil
blows off for York, for Philadelphia, the coast,

and pasture erodes to bone. A black walnut’s roots
pierce the buried limbs of our grandfather’s fallen
spruce grove. The caterpillar inches along, lost
in its sad accordion hymn. 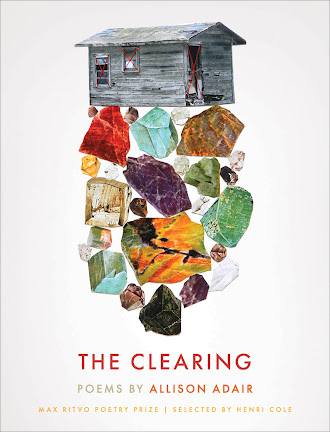 Winner of the Max Ritvo Poetry Prize, selected by Henri Cole, is Boston poet Allison Adair’s [see her recent ’12 or 20 questions’ interview here] full-length debut, The Clearing (Minneapolis MN: Milkweed Editions, 2022), a collection assembled via lyric examinations of rural touchstones and violence, beauty and catastrophe, mining disasters, snow and domestic abuse, and other dark turns among a heritage of tractors, farmland and wolves. “When you begin to hate a man,” she writes, as part of the opening poem, “AFTER THE POLICE HAVE BEEN CALLED,” “his stunt fingers / swell with fat.” Adair composes narrative bursts of tension that shimmer at the edges, often allowing for something darker to appear just beyond the frame; something suggested, hinted, even threatened. As she writes of shadows, daughters and Georgia O’Keefe paintings in “FINE ARTS,” a poem that ends: “Our daughter’s brow resists this argument / for the hidden spectrum in white—we’ve taught her / cat from bird, engine from wheel. But here the petals open / to disclose their secret green, their yellow / blue pink gray. She is learning roots can be / branches can be shadows or hands / twining a woman’s hair / depending on the light.”

Adair writes of the struggles of women who lack agency, suffering toxic situations, rural isolations and abusive men. Her descriptions manage an enormous amount in a short span of words, setting scenes brilliantly against a lyric that carries its unique, underlying song that still allows for the possibility of such vibrant beauty across such settings. She writes with clarity, but it is the balance of descriptive acuity against shadows where the strengths of her poems lay, her narrations either having just emerged and looking back, or looking deeply into, even if from but a distance enough that may only temporarily be considered safe. “It’s dark but you know something / is there. It was an accident,” she writes, to close the poem “MOTHER OF 2 STABBED TO DEATH IN SILVERTON,” a poem prompted by a headline and article in the Denver Post, June 7, 2014, “he said, I never meant it. They stood there still // as newsprint.”