Dead on—in the night sky,
or stuck in the deep web,
bear stars exist. Name the
bone piles on the marsh
heaving like the Chukchi
sea-pure-ice-white and
Arctic air rising. Fifty miles
of open water floating.
I’m a carcass with
marrow bones 5x’s an ice
bear at 1,500 lb. and 9 feet
tall. One swipe of my paw
you’re neck-snapped, to the ice,
melt ground, cheek to red
ice stream. I glance across
the whiteness to myself. 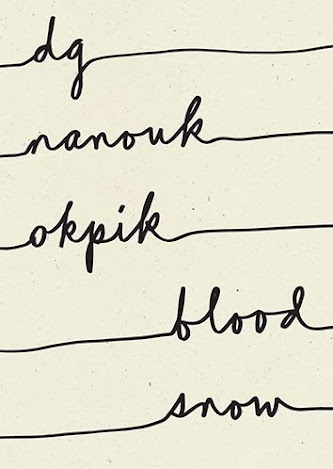 The second full-length poetry collection by New Mexico-based Anchorage, Alaska Inupiaq-Inuit poet dg nanouk okpik, following the multiple award-winning Corpse Whale (Tucson AZ: University of Arizona Press, 2012), is blood snow (Seattle WA/New York NY: Wave Books, 2022), a collection of meditative, first-person descriptive lyrics populated by birds, inlets, polar bears, the north wind, polar cap and the thaw, moose tracks, seal, birch and berries. “Sunken sod of whalebone,” she writes, to open the poem “Ice Age Two,” “earth houses rising, / out of feathered sea / water.” Grounded in her particular northern landscape, okpik offers a perspective on a culture and climate, as well as man-made pollution and climate change, specifically around northern resource stripping. “The Little People brought south / winds with pollution.” she writes, to open the poem “Polar Bear Lost,” “As the polar / thunder starts in a rip-crackle- / roaring, across, on January 1st / 2018 in Santa Fe just as / Ursus Maritimus.” There is a curious call-and-response element to certain of her poems, suggesting nearly a hybrid form of the English-language utaniki (thinking specifically of Canadian poets such as bpNichol, Fred Wah and Chris Johnson), as certain poems in the collection include a small trio of lines at the ends of poems, nearly as a three-line closure or addendum, adding to the pulse of the body of the poem through a combination of repetition and addition, almost in a haiku-like structure. “way in and one way out,” she offers, to close the poem “Fossil Fuel Embers,” “blackwood cooked slow over done / skies whale gray-blue [.]” On the whole, okpik offers such a lovely and light touch of the lyric, the line, one that rolls across a deep knowledge of a landscape, composed to bridge her own particular distance. “In the sunglow I roll / a handful of ice silt clay,” she writes, as part of “Early Morning Sky Blue Pink,” “roll it in my hands until // they’re red-rose red—I don’t let them bleed. / Let them feel with the texture of each grain. // I’m a round ball; minute ball. / A blossom ball of future-past-present.”

This is a wonderfully evocative collection, with an open heart and a determined lyric, and there’s a straightforwardness to the structure of this collection that I’m quite enjoying, one that isn’t broken up into thematic or structural sections, but simply a collection of individual poems, assembled together to form a book. Her poems do seem composed to attempt, in her own way, to reconcile a suggested disconnect—the rippling effects of her outside adoption as an infant—between herself and the foundational elements of her culture and landscape. “No, not all at once did they come,” she writes, as part of the poem “When the Mosquitoes Came,” “those takers didn’t know. Then they came in waves of time, / curiosity driven in urgency of a newborn baby girl, / me to be only theirs, no matter what harm it caused me / it was to an Inupiaq family secret, / what they knew meant right makes might.” As a whole, blood snow exists as a document of witness, a love letter and a declaration of belonging, and an argument for both ecological and cultural preservation, simply through the evocative descriptions and language the flow of her lyric, the waves of her words, provide against such book-length shoreline. “I live in a dugout in the cliffs next to the ocean,” she writes, as part of the poem “Twilight Pain,” “bluffs receding filling with seawater rising / from melting glacial ice. Across the inlet seal island / not far from my dugout. / They bark and sun themselves all day, / but are in constant fear of losing ground to walrus.”