POEM IN WHICH WORDS HAVE BEEN LEFT OUT

—After the Miranda Rights, established 1966

You have the right to remain
anything you can and will be.

An attorney you cannot afford will
be provided to you.

You have silent will.
You can be against law.
You cannot afford one.

You remain silent. Anything you say
will be provided to you.

You will be held. You will be
provided. You cannot be you.

California poet and editor Charles Jensen’s third full-length poetry collection, following The First Risk (Amherst MA: Lethe Press, 2009) and Nanopedia (Red Wing MN: Tinderbox Editions, 2018) [see my review of such here], is Instructions between Takeoff and Landing (Akron OH: The University of Akron Press, 2022), a structure of lyric examinations that collectively articulate poetic form, human possibility and personal grief, composed from within the chaos and potential self-destruction of America. “Before there was loss,” he writes, as part of the opening poem, “ORIGIN MYTHS,” of the seven-poem sequence “INSTRUCTIONS TO THE EXAM TAKER,” “there was gain.” He writes of the space race, tales of masculinity, story problems, childhood, mortality, family and fear, and cultural appraisals and apprehensions, often employing sly commentary on the ways in which we perform to each other, or even to ourselves. “Where the world enters us,” he writes, as part of the poem-stagger “STILL,” “is where it leaves / its scars.” The playful manner Jensen offers his structures, set with wry humour, often belie some of the dark material he wrestles with throughout the collection, from Miranda Rights, the belief in the “rapture,” to fear of death and of death itself, such as the sequence “HOSPICE,” a devastating and delicate lyric in nine short sections, the first of which, “Lift,” reads:

I lifted my mother’s body from the passenger seat—
the notches of her spine, her slats of ribs—
each bone against my skin, her weight
pulling me down even as I lifted her 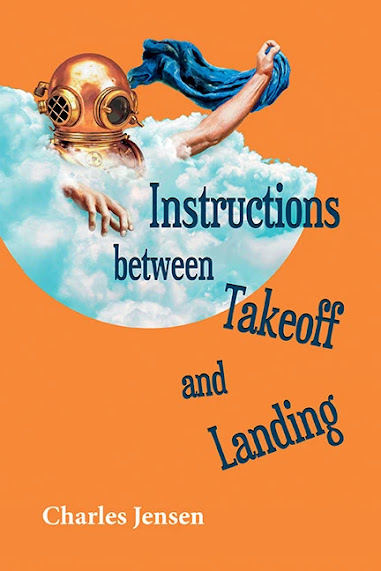 There are such losses throughout this collection, and for Jensen, it would seem, those losses are deeply personal, and deeply felt. One could see the parallel of “takeoff” and “landing” as the points between birth and death; one could see the entire collection a playful deflection, utilizing sly humour and a playful manner around a book around death, and the grief that so often surrounds and accompanys each experience. As the poem “STILL” offers, further on: “I cannot take / any more pain from other / people’s misery.” The two-page poem ends: “Your suicide was not / a crime against life. It is / a limp most people can’t / detect. I lie I always tell.” His poems are simultaneously delightful and devastating, composing lines so tight that one could bounce a quarter, one might say, off just about any of them.

Having worked his prior collection through an examination of the prose poem, the poems in Instructions between Takeoff and Landing play instead with alternative elements of poetic narrative, including plays on the schoolbook quiz and official government surveys. His poems, one might say, are beset with questions, some of which might not actually be as rhetorical as he suggests. Set in eight sections, every second section, each called “STORY PROBLEMS,” includes each but a single sequence of numbered poems, composed as cycles that work their way through the collection as a whole. Each section within these particular sequences also include an additional call-and-response format, displaying echoes of the classic Greek chorus, of the school workbook “quiz questions,” offering simultaneously revealing and tongue-in-cheek queries that illuminate the poems they sit within. As part of the sequence “INSTRUCTIONS TO THE EXAM TAKER,” the second half of the fourth poem, “MEMORY,” writes:

Quiz on this section:

a.      Point to the most revealing expression in this passage. What does it suggest about you? About me? I mean, the narrator.

c.      Sketch the feeling of “isolation” using charcoals or Cray-Pas only.

d.     Describe the atmosphere of a planet in our solar system as though it were your childhood.

Posted by rob mclennan at 8:31 AM
Labels: Charles Jensen, University of Akron Press