The night moon clicks on outside my window. Vertical blinds like traitors hang and twist backlit in the glow. What is there outside that I have left to know? The night’s black mask pulls down across the window’s face: am I victim or witness? I pace the floors and wait. The night has gloved hands against the glass, working magic on the rusty hasp, the sash, the latch. My clothes are getting old: my vocabulary’s dwindled. When the outside air comes in with its single mission, will I even flinch? The night upon me like an owl, staring into me with oppressive eyes, breath foul. Should I kiss it on the lips? What do you think it thinks of me, pressing its heavy failures against the misery of my unresponsive hips?

Los Angeles poet and editor Charles Jensen’s latest is the prose-poem collection NANOPEDIA (Red Wing MN: Tinderbox Editions, 2018). Jensen is the author of six poetry chapbooks—Breakup/Breakdown (Five Oaks Press, 2016), Little Burning Edens (Red Mountain, 2005), Living Things (Thorngate Road, 2006), Story Problems (Palooka Press, 2017), The Nanopedia Quick Reference Pocket Lexicon of Contemporary American Culture (MiPOesias, 2012) and The Strange Case of Maribel Dixon (New Michigan Press, 2007)—as well as a previous full-length collection, the Lambda Literary Award Finalist The First Risk (Lethe Press, 2009). Subtitled “The Smallest American Reference,” NANOPEDIA informs that the title emerges “from the Latin nanus (‘dwarf’) and –paideia (‘related to learning’). A reference book with tiny entries.” With each poem within the collection a single-stanza lyric prose poem, whether singular poem or as a sequence, NANOPEDIA is very much an exploration of cultural and political space-as-reference. As he writes as part of a recent interview at minor literature[s],conducted by Frank Garrett:

Nanopedia didn’t start off as what it is now. Originally, during a time between working on these other projects (thesis and The First Risk, as well as the interruption of writing the Living Things chapbook and its corresponding full-length manuscript The End of Metaphor, which is unpublished), I tasked myself with finding a word, a “luminous” word, that had a resonance, and when I got home I would sit down with the intention of writing a slant definition of the word in paragraph form. I probably wrote about 100 of these over the course of several months, and almost none of them have kept their original titles, which were the inspiring words themselves. 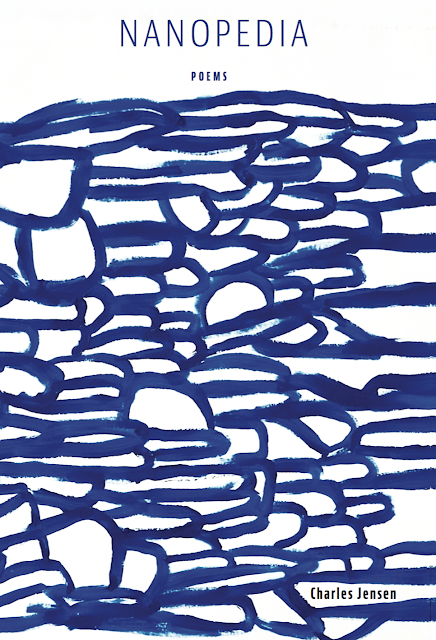 The poems in NANOPEDIA play with the structures of the stories and mythologies of “America,” composing, as he suggests, “slant” prose poems akin to a combination of short scenes and brief essays, writing on, around and aside manifest destiny, Walt Whitman, manscaping, exile, intelligent design, domestic terrorism, the first amendment and other topics. Jensen explores these ideas, most of which exist as foundational concepts of America, despite many of which are either outdated or outright false. How is one able to write in any space, any country, that refuses to know itself? Jensen’s poems articulate that frustration and wrestle with that space between knowing and unknowing, all while refusing to write in a straight line, which often manages to find the point far easier for it.