I hated myself because of it, it mystifies me, lies to me, confuses me, and always brings me to my knees; it tears me to little pieces that scatter in the lone wind, landing in different parts of the world I’ve never been and could never dream to go to, after all I was at the very end of the world, on a small reserve that ended by the lake. Reading brought me to Africa where the lions, giraffes, rhinos, and elephants roamed the land and hungry children thought about being me, with plenty of food, while I thought of them having plenty of love, and wondering which was worse? Was Maslow’s Hierarchy of Needs wrong in stating food comes before love? (“An ‘Indian’ Never Dies Peacefully”) 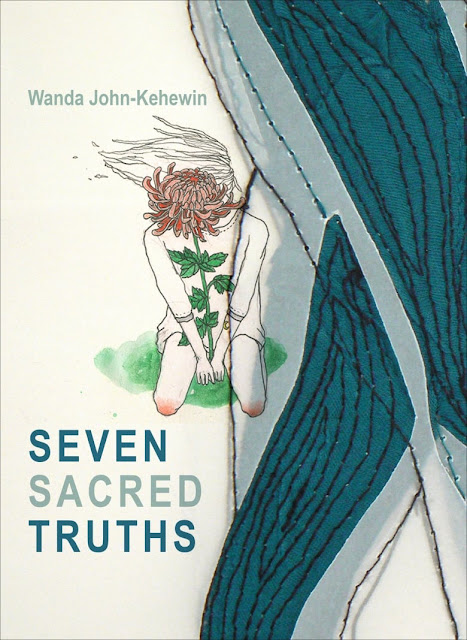 A title that nearly went by me was Alberta poet Wanda John-Kehewin’s second trade collection, Seven Sacred Truths (Vancouver BC: Talonbooks, 2018), a follow-up to her debut, In The Dog House (Talonbooks, 2013), a title that did actually slip entirely past my attention. Seven Sacred Truths speaks directly to and around colonialism and the effects upon aboriginal life, writing out some dark truths as a way to direct healing, composure and wisdom. There are poems in this collection that rage, that document, and dismantle; others read like prayers, seeking to heal what has long been broken, and fractured, as she writes to open the poem “Creator, Ancestors, Universe”: “Please help Mother Earth who is being ravaged, pillaged, and crucified. / Help the two-leggeds realize the destruction of Mother Earth travels forward.” Part of what makes this collection interesting is in the mix of styles and approaches, from lyric fragments to prayer to prose sections, each moving with different purpose and direction but all with similar goals, that of attempting to acknowledge, respond and finally thrive, despite a personal and cultural legacy of brutality. In an interview conducted by Joanne Arnott that appears on the Talonbooks website, conducted around the time of John-Kehewin’s debut, she responds:

Growing up as a Cree Catholic definitely has influenced the way I write; in as far as I don’t feel a connection to Catholicism. In my writing about it, I think there is a hint of indifference and probably a touch of anger. I think I have to distinguish between the Catholic influences of the past (residential schools, churches on reserves) and contemporary Catholicism. I immersed myself in another culture as a way to unbind myself from what I thought damaged my heritage in the first place. I was a practicing Buddhist and a vegetarian for seven years with the goal in mind to respect all life, which at the time, I didn’t think Catholicism did.

I think it was a necessary road for me to travel to get to the mindset I am at today. I am always open to new learning. I doubt life and spirituality is all cut and dried, as different faiths lead us to believe. If I had to analyze my writing I’d say I was still angry at the church for past injustices. It was easier for me to follow the Buddhist faith as they were more forgiving. I have made peace with Catholicism so to speak.

Nowadays, with my feet immersed in to so many different pools of faith, I am more accepting of the different belief systems out there. As long as you aren’t harming anyone then I’d say it was a path meant for you to take.

Writing for me is therapeutic and it’s the only way I can tell how I really feel about a situation. I’m not sure where this comes from, but writing definitely is a big part of healing and processing of information.