I’M ONLY HAPPY WHEN IT RAINS
after the Garbage song

My song came on and I jerked the volume up,
stomped on the gas, sang along: My only comfort
is the night gone black. Since his laryngectomy,
my father couldn’t talk. He studied me
from the passenger seat. I had to chauffeur him around
after his strokes. I wished the Toyota were a rocket
shooting me out of this town. Pour your misery
down on me. The song ended. I’d cried
through the last chorus: I’m riding high upon
a deep depression. I’m only happy when it rains.
He gestured to his paralyzed side—his right hand
a claw resting in his lap, his right leg limp
against the car door. He pointed to his chest,
mouthed, Me, too. He struggled to sit up. Me, too. 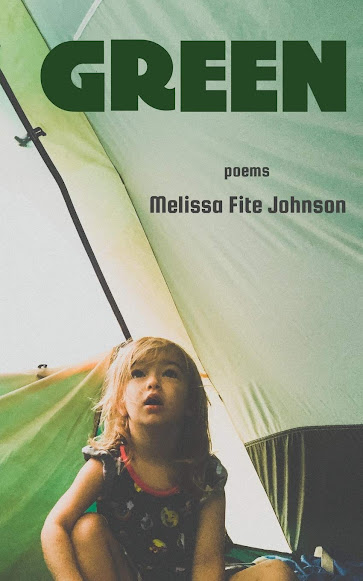 Lawrence, Kansas poet Melissa Fite Johnson’s second full-length collection, following While the Kettle’s On (Little Balkans Press, 2015), is Green (Arlington VA: Riot in Your Throat, 2021), a collection of short, feisty, first-person narratives set as accumulations of short sentences or phrases, one piled or layered atop another. “Once my father wanted yogurt / but couldn’t remember the word.” she writes, to open the poem “THE IMMEDIACY,” “Once he tried to carry his own cereal, / brace the bowl’s lip against his cane handle, / and my mother came home to flakes / crusted to the kitchen floor.” Johnson composes a sequence of staccato narratives on family, childhood, pop culture and growing up, offering a progression of family moments, from her father’s illness and eventual death to her mother finding someone new, and moving to join them. She writes of youthful folly, youthful trauma, setting pop culture against hard lessons, understanding only the experience of another through her own lens: “He clamped his hand over your guitar, / undressed your melodies, forced / your words into his mouth.” (“APOLOGY TO TAYLOR SWIFT”) Her narratives bounce between staccato-points, allowing her conclusions to occur between occasionally distant markers, composing poems that almost give the appearance of disconnect or collage, but exist as threads, deeply held together and deeply felt. There is such heart here, one that carries the narratives across their thresholds, navigating the best and the worst of each possibility it might endure.
Posted by rob mclennan at 8:31 AM
Labels: Melissa Fite Johnson, Riot in Your Throat