Jennifer Givhan, Belly to the Brutal

Afterward, after each death, still the question
What did it mean to be alive?

I carried a nopal into the confessional, sickly
potted & dying. I loved it

with my salt. My daughter asks if I’ll plant
a tree beside all the lonely

trees growing alone. The cells she & I passed
through the blood barrier, flashes of bright pink

bulbs at the tips of our organs as she grew
inside me—cells we still share, planting traces

Someday one of us will carry a ghost.

In heaven, I asked what became of the nopal—
then the pads of my hands greened & spindled

into a cathedral of cacti. 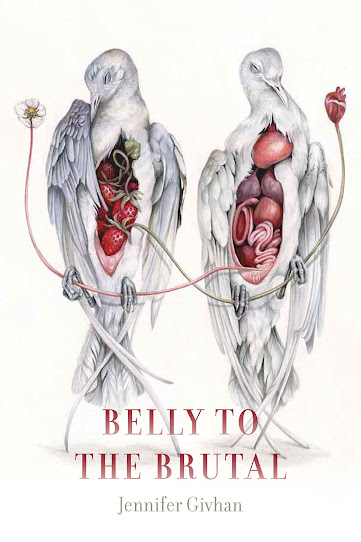 Mexican-American Latina and indigenous poet and novelist Jennifer Givhan’s latest poetry collection, following Landscape with Headless Mama (2016), Protection Spell (2017), Girl with Death Mask (2019) and Rosa’s Einstein (2019), is Belly to the Brutal (Middletown CT: Wesleyan University Press, 2022), a book on motherhood and daughters, including the echoes of one’s own childhood that inevitably emerge. “Adulting, I’ve heard,” she writes, as part of “GIRLCHILD   PROPHETESS,” “is understanding our / mother’s anger when we forget to take the chicken out of the / freezer. I’m not a grownup mother. I never let anything thaw.” Givhan works a sequence of short monologues on lyric form that lean into the mystic, mythical and abstract, even while articulating the concrete specifics of domestic fear and hope around parenting and children, from faith and failures and dislodged hope to labour, self-care and domestic abuse. She writes of the complications of mothering a daughter through the dark terrain of familial patterns, external racism and generations of misogyny, all held as delicately as song. As the back cover offers, this collection “sings a corrido of the love between mothers and daughters, confronting the learned complicity with patriarchal violence passed down from generation to generation.” “My daughter / is a graveyard by which I mean ripe // for rebirthing.” she writes, as part of the poem “THE EXCAVATION.” Later on, the three page piece ending: “I’ve borne / from daughter, from the un- / mothered loam.”
Posted by rob mclennan at 8:31 AM
Labels: Jennifer Givhan, Wesleyan University Press