These artists—again, intentionally or not—have engaged the landscape genre in a fluid way, a way that puts the landscape back into motion, and in doing so, they have found alternatives to some of the presumptions and practices of landscape art common to Euro-centric contexts, such as the use of linear perspective, in which the proper viewing position can only be occupied by one person at a time, thus implicitly supporting hierarchical social and political systems and the regimes of appropriation, colonization, and exclusion that go along with them.

A substantial body of western landscape theory written over the past thirty+ years has critiqued the genre’s reinforcement of binaries such as inside/outside, subject/object, and culture/nature. Such binaries are part of the ideological approach through which landscape art can reduce a complex network of animal, vegetal, and mineral interactions to a static ornament, reinforcing a sense of human power over “nature,” imposing specific cultural values, and/or claiming or exercising control. Such a stance projects human interests and desires so thoroughly that they effectively anthropomorphize the world, subjugating its non-human elements to humans’ will to turn the world to our uses and/or reflect our domination of (and imagined separation from) the “natural” world.

And yet, throughout the centuries, various artists have taken quite different approaches, implicitly or explicitly advocating relationships with the earth based on collaboration rather than domination, conversation rather than control. Achieved through variations on conventional depictions of the world around them, such works, rather than standing back and looking at that world, instead participate in it, thus keeping something of the vital motion of the moment intact.

That motion is not only spatial, but also temporal, in the process of presenting space in dynamic flow, these works also acknowledge the fluidity of time. They are not interested in being “timeless,” an epithet often applied to works marked by a distilled quality that they’ve only achieved at the expense of remaining disengaged from their own moment; instead, these works insist on specificity, on particularity; in short, they advocate an art in time, inn all the possible meanings of that term—an art conjugated into the present, and in time to do something about that present. If art is the verb in the grammar of culture, it’s those works of art in the active tenses that have the most potential to play a role in keeping that culture responsive to its immediate demands and needs. (“Introduction: An Argument Against Timeless Art”) 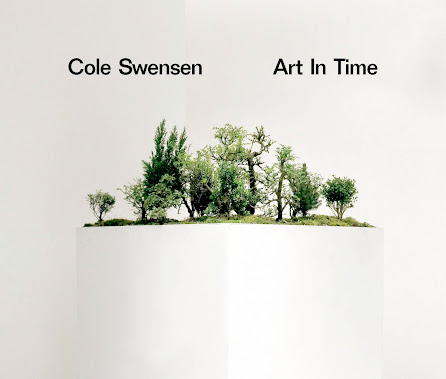 Art In Time is made up of twenty sequences of lyric prose composed as essay-poems, each of which examines a particular artist’s work, including “Willem de Kooning: Composed Windows,” “Sally Mann: Untitled Ground,” “Henry Ossawa Tanner: Night Over Night,” “Renee Gladman: Acsemic Cities,” “Gustav Klimt: Seventeen Summers” and “David Hockney: The Four Seasons.” Her essay-poems exist as a blend of research, commentary and critique around a field or fields of movement by her chosen artist, and on their chosen work or works. “We’re considering only the late works because it’s only in them / that night gets built of light,” she writes, to open “Henry Ossawa Tanner: Night Over Night,” “letting contradiction lock into place as / the principal engine of Tanner’s oeuvre.” As Swensen describes through her introduction, the pieces in Art In Time exist as an extended essay on depictions of and approaches toward landscape through visual art, layered through individual “chapters” around individual artists. “Landscape with Person or The White Road,” she writes, as part of the sequence “Chaïm Soutine: Reeling Trees,” “1918-1919 / We’re falling up a hill—still as the light shines through— / climbing branches that hold a house up to the sky // as the road divides—as the cliff falls— / as the sky falls—as the road flays // and the world tilts red where it isn’t / walking along a road thrown farther up // as we pick our way down the red cliff / running in the sun.”

Her poetry titles over the past twenty years have become increasingly project and research-based, as studies on landscapes and the human structures set upon nature, whether elements of time, painting or medieval French gardens, exploring the human capacity to arrange presumptions of order upon the untamed wild, as well as what and how exactly gets depicted. As she discussed her then-recent array of book-length poetry projects in a now-disappeared interview conducted a few years ago by Andy Fitch for The Conversant: “They revolve around separate topics, yet address the same social questions: How do we constitute our view of the world (which, of course, in turn constitutes that world), and how does the world thus constituted impinge upon others?” As she discusses four 9-screen video installations by British artist David Hockney towards the end of “David Hockney: The Four Seasons, Woldgate Woods”:

And though throughout the series, we’re constantly moving, we will clearly never arrive, but continue to shift in relation to the relative proportions of road and trees. Chinese aesthetic theory had rejected the idea of a vanishing point by the eleventh century because it meant that you—the viewer—weren’t there. you weren’t moving. If you’re not moving, in a way, you’re dead.

This is a fascinating study on how both artist and viewer potentially enter the space of a depicted landscape, through a book that, hopefully, is critiqued at some point by someone better versed in the history and study of visual art. I’m fascinated by these essay-poems, and how she moves across entire lengths of geography, styles and history in her list of artist subjects; fascinated by how her essay-poems ebb and flow through biographical detail, intricate critique and broad, sweeping strokes that highlight even the smallest details. “He worked slowly,” she writes, to close “Gustav Klimt: Seventeen Summers” (a piece that appeared in an earlier form as a chapbook through above/ground press), “meticulously rising before anyone else into the / empty house, into the summer that far north in which the question / of morning is increasingly simply a tone on a pallet, a gravel path / from which you could see the foothills of the Alps. A gravel path / up which no one is walking. There are never any people in Klimt’s / landscapes, no animals, and so we must concede that it must be / the landscape itself that is moving.” Swensen writes of how each artist’s work allows the viewer to enter into the landscape, writing out how one is simultaneously part of and separate from the landscape, and the effects it has on the viewer, the view and on the art itself. “Renee Gladman’s drawings could be anything,” Swensen writes, as part of Gladman’s section, “but they happen / to be cities.” Or, as she writes as part of “Rosa Bonheur: Animals with Landscape,” focusing on the painter and sculptor Rosa Bonheur (1822-1899):

She lived an independent life, insisting on it, never married, wore trousers—which required the permission of the police at the time—and traveled widely, bringing a wealth of images back from her trips:

Morning fog and up through fog, the way things come up through fog, somehow seeming closer as they grow yet more faint. They retain the ghostly—you can see the ghost inside them, a morning in Scotland, several cows, but because of the fog, they can’t settle into a finite number. Became Morning in the Highlands, 1857.

And another, a lake across which the cattle swam on their way to the annual market at Falkirk, some of them, almost drowning, held above the water’s surface by their horns by men rowing alongside them in boats. Became The Boat, 1856.

And later, on the same trip, another lake singing in the dark, across a lake around a lake, the way the dark makes the walk, and farther on, we hear (Nathalie writing to her mother) It was the only time I ever heard her sing.

1850: in the Pyrenees, admiring the grandiose savagery of the mountains from the back of a horse that she and Nathalie shared in order to cut the cost. You have no idea how hard it was not to bring back a sheep and a goat. On a later trip, 1853, they did bring back an otter, who often snuck into the house and joined Henriette in bed.