Bren Simmers, If, When

About a hundred years after my grandmother Janet was born, I moved to Squamish, BC. Eighteen kilometres north of Britannia, the small logging-turned-tourist town is just an hour’s drive from Vancouver. Real estate agents will tell you forty-five minutes, but that doesn’t account for traffic or for accidents on the curvy section near Lion’s Bay. At the time, Squamish was rebranding itself as an outdoor tourist destination, and tension between ‘old’ and ‘new’ was rising, along with housing prices. Two major developments were also being proposed: a liquefied natural gas plant at the old Woodfibre pulp mill (just across the inlet from Britannia) and a ski hill north of town that butted up against the backcountry of Garibaldi Provincial Park. The community was divided on these issues as it tried to strike a balance between jobs, sustainable growth, and ecosystem health. I worked in an environmental centre; I felt lucky. I spent my days walking forest trails with kids, picking up salmon jawbones, counting bald eagles.
As all this was unfolding, my father told me the story of [great-grandparents] Dinty and Isabella. As I researched my family history, poems began to emerge in their voices. While I never met my great-grandparents, I couldn’t help but see parallels between our lives, a hundred years apart. our need for community, connection. How we relied on wild places to make a living, on forests for recreation, lumber, fuel, and medicine. How environmental legacies outlast lifespans. At some point, what I was writing about Squamish started talking to an older life in Britannia. I began to think about larger cycles of time. This book is the result of that conversation across generations. (“Introduction”) 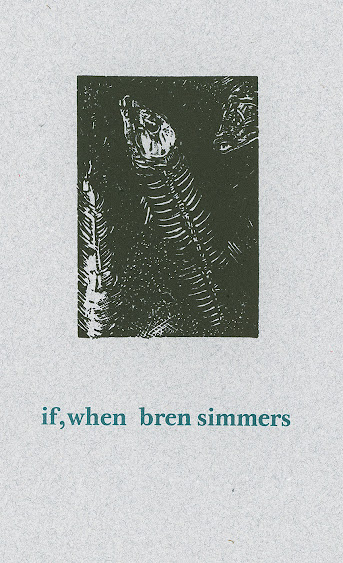 Given how much I enjoyed her prior collection, I’d been curious about Canadian poet (currently located on Prince Edward Island) Bren Simmers’ latest, If, When (Wolfville NS: Gaspereau Press, 2021). Her third full-length poetry collection, If, When writes on a particular landscape of British Columbia, citing fishing and mining towns, moving through history and family histories, and connecting back to her great-grandparents who had emigrated to the same area from Scotland, a century prior to her own arrival. In certain ways, elements of Simmers’ west coast explorations of industrial work exist as both continuation and counterpoint to similar types of work-writing over the years by Barry McKinnon (pulp/log), Michael Turner (Company Town) or the late Peter Culley [see my obituary for him here]. “Some men stuff cotton,” she writes, to open the poem “WIDOWMAKER,” a poem subtitled “Dinty, 1914,” “in their ears to mute        My great-grandfather / ghosting the margins. / the artillery of drilling rock.”

There is a curious kind of loose call-and-response to these narrative lyrics, the ways in which she moves from contemporary to elements of her great-grandparent’s lives, or the lives of her grandmother Janet, and the husband that eventually abandoned her and her children. As she opens the poem “MY GRANDFATHER WAS,” writing: “A drunk. A charmer. Dead / before we were born. A lumber man, / who bought timber rights, a planer mill / outside Prince George. Loaded / wood onto boxcars. Not spoken of.”

She writes of work and industry, but only as an element of a larger structure of family relation and time, writing her immediate and the echoes of a century distant, and the lives of her great-grandparents through lyric description and short narrative bursts. Simmers’ work-to-date, through the poetry collections Night Gears (Toronto ON: Wolsak and Wynn, 2010) and Hastings-Sunrise (Gibsons BC: Nightwood Editions, 2015) [see my review of such here] and non-fiction Pivot Point (Gaspereau Press, 2019), are very much grounded in geographic and human spaces, writing the land and landscape upon which she exists, and If, When allows for a further consideration, that of the echoes of her own lineage across those same paths. “All his letters ink black by censors.” she writes, as part of the poem “AT LAST,” subtitled “Isabella, 1918,” speculating her great-grandmother’s thoughts at the end of the Great War. “Limbs intact / but his easy laugh? Time enough to reconcile the / men who left with the men who come home. / The men are coming home.”