She didn’t know what was about to be said.
She had to find out after it came out.

She knew what was about to be said.
Was she hearing faster?

How can you hear in advance?

All the particles of the personal mind,
finally shown to be a crowd of strangers

all deluded thus, dropped into
a silent starless garden. 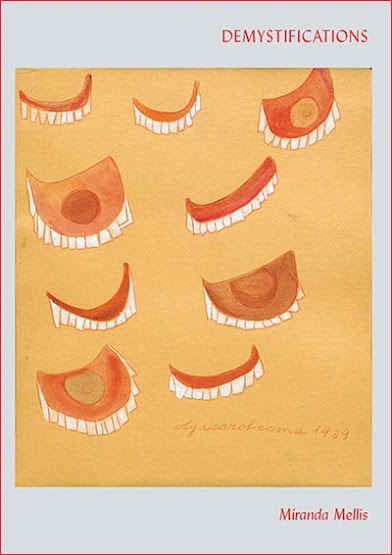 Described as “both a collection of aphorisms and a book-length poem, ninety-nine texts and one text” is American poet, writer and philosopher Miranda Mellis’ latest title, DEMYSTIFICATIONS (New York NY: Solid Objects, 2021). The author of a handful of works over the past decade-plus through presses such as Carville Annex, Trafficker Press, Solid Objects, Sidebrow Press, Portable Press at Yo-Yo Labs and Calamari Press, DEMYSTIFICATIONS is the first title of hers I’ve seen (so I am clearly behind on my reading). Produced as a sleek hardcover volume, DEMYSTIFICATIONS is structured as an extended sequence of ninety-nine numbered bursts of lyric philosophy along with an endnote, folded neatly into the back of the published book.

Suggesting that the collection is “a collection of aphorisms” seems, to my mind, slightly misleading. The idea of the aphorism suggests self-contained wisdoms, and these are thoughts that exist instead as a collection, and as a trajectory: short, sketched-out bursts in an aphoristic manner, but held together in an accumulation. I would suggest that Mellis writes her aphorisms, instead, as part of a tradition of the long poem, as worked by poets such as Fanny Howe, Etel Adnan and Muriel Rukeyser, all of whom make appearances throughout the text. She writes on philosophy and politics, and public knowledge, absorbing and responding to folded-in quotes from multiple cited sources. As number forty-two reads: “Do you know the word dialogue? / How about conversation? // It’s not the same as monologue, / where one person talks the whole time.” Hers is a text that does work to exist in dialogue with other texts, other ideas, wishing not to offer purely her own takes on thought, but opening up the possibility of both divergence and the chorus.

DEMYSTIFICATIONS is a book of thinking-in-progress, reading through the movement of thought as it occurs, which happens quickly, suddenly and over an extended period. “Vulnerability,” she writes, in the four word couplet that makes up number thirty-seven, “a timeless antique.” The endnote, also, exists as a curious combination of visual poem and index, set as a complex visual representation of the connections and references throughout these ninety-nine poems. This is a collection that rewards repeated readings, and there is something really lovely and open about the way in which her narrative thread exists, running multiple directions simultaneously. While one could read this piece from end to end, it is possible, also, to catch altered perspectives through simply dipping in at random points, and moving either backward or forward. The logic of her poems are structured in sequence, but allow for a more open reading as well, one that could just as easily been presented on a series of ninety-nine unnumbered cards. What might that particular reading process, I wonder, have garnered?

We are never along because of the way memory functions.

What about history?
What is the difference between history and memory?

We are never alone because of the way history functions.