She is a diarist, & as such wants
to remember thoughts & events she has lived,

especially the delicate events & contradictory thoughts she
perceives herself to be hearing & watching. She

is reporting on her own attentions, while feeling
the sensations spring from her entire body. She

senses you shiver there, twelve feet ahead, beyond
the iron tabletop. She tries to define why

she comes here, sitting & growling, when it
is not exactly pleasant. It aches in ways 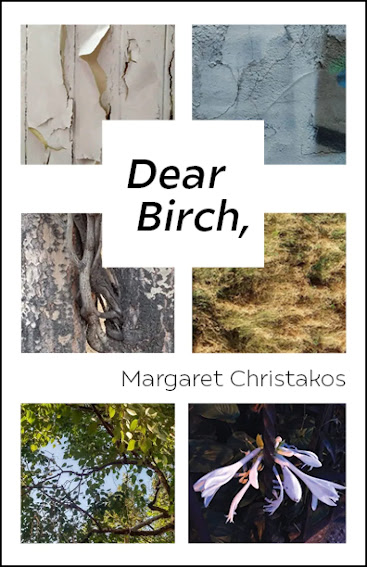 Toronto poet Margaret Christakos’ latest poetry title is Dear Birch, (Windsor ON: Palimpsest Press, 2021), a book that exists as a curious extension of the expansiveness of her poetry collections over the past few years. Her first few poetry collections, beginning with Not Egypt (Toronto ON: Coach House Press, 1987), were composed as self-contained poetry titles that wrapped poems in and around each other within the bounds of the individual collection, slowly evolving to work and rework her own texts in a way that reshaped both the language and thinking of her ongoing work. Her more recent collections, predominantly over the past decade or so, have explored larger structures and themes that seem to move through and across multiple book-length titles. Even the notion of the cycle, a self-described structure this collection shares with her prior collection, charger (Vancouver BC: Talonbooks, 2020), could be suggested as both an excised thread (from some larger, more ongoing consideration), and a journey that returns to where she began.

The ten-poem cycle of Dear Birch, (yes, the comma is part of the book’s title) excises some of its poems from other of her publications, pulling from the chapbook Retreat Diary (Book*hug, 2005), her full-collections charger [see my review of such here], Multitudes (Toronto ON: Coach House Books, 2013) [see my review of such here] and Welling (Sudbury, ON: Your Scrivener Press, 2010), as well as through the non-fiction lyric of her remarkable lyric essay/memoir Her Paraphernalia: On Motherlines, Sex/Blood/Loss & Selfies (Toronto ON: BookThug, 2016) [see my review of such here]. Through pulling from the threads of other collections, she simultaneously establishes something self-contained and reinforces the idea of how her published books speak and relate to each other.

Individually titled via date, her cycle is presented in an order slightly out of sequence, and only one of these poem titles includes a year: “Aug 24,” “Aug 19,” “Aug 20,” “Aug 21,” “Aug 22,” “Aug 23,” “Aug 26,” “Aug 27, 2009” and “Aug 28.” She writes of social media, intimacy and human connection and the shadow of her mother’s death; she writes of her adult children, who sit in close proximity, and her experiences and thoughts on dating sites and lovers, from those who have begun to drift away, to those potentially emerging across the horizon. She writes of the two poles of her life meeting, from the loss of her own mother to what her children will have to endure.

to be broken at the edge of anyone
new ever arriving in their future. (“Aug 26”)

The lyric of Dear Birch, exists as a sequence of poetic meditations, working the lyric through a cycle of ongoingness, moving through family, loss, intimacy, reading and desire. “Inside // the house are two of her adult children,” she writes, as part of “Aug 20,” “one in the basement adjusting sound levels, making // music out of beats, beats out of music, / & one upstairs working, typing, planning, cataloguing her // extraordinary photographs, moving in her many directions, at / once.”

The poem “Aug 27, 2009,” seemingly, exists almost as the central core around which the rest of her cycle swirls; the poem is structured far differently than the rest, as a single-page poem of four-line stanzas, instead of the rest of the collection, her poems set via accumulating couplets. It almost gives the impression of an earlier poem, the root from which the rest of the collection emerges, folded into the suite as an earlier portrait of her birch tree. Here, perhaps, is the core of how she begins to connect with this particular tree, attempting to articulate the swirls of human interactions she works through, as she writes: “I have too-white bark that peels from my core. […] I am curling like a fetus / Into the non-birch world. Enough I have had // Of my paper-skinned nature.” She writes simultaneously of her vulnerability, and her wish to be less so. She writes of her ability to endure, through all the breaks and losses, and all of those potentially yet to come. As she writes as part of “Aug 24,” the first poem-cycle of the collection: “She doesn’t want / to get too close to the fragment, respecting // it’s already a wet broken thing lucky to / have survived at all.”

There is something interesting about wrapping a poem-cycle around a birch tree in the yard of her rental, allowing herself the contemplative and meditative space of directing her thoughts toward this singular tree. “She can’t tell you how // her heart would seize if someone came in / the night & decapitated you, dear birch,” she writes, as part of “Aug 22,” “& // your reign over the patio, if someone should / enter to burglar your branches or, worst, slice // your trunk & grind the spine of it – / she would vomit. She would rage. What a // tree provisions her cannot be conducted by air / alone, cannot be restaged by a greenhouse sapling // slipped into the massive root cavity that would / be left torn open if you, dear birch, // were routed. She prays there’s no morning where / she wakes to such a scene.” There is something of the echo of the late Roy Kiyooka’s backyard pear tree to these poems, in which Kiyooka composed his own book-length cycle of poems directed at the pear tree, one which focused on his recent break-up with poet Daphne Marlatt, through his pear tree pomes (Toronto ON: Coach House Press, 1987). And then, of course, there is her reference to Walt Whitman, as she writes, as part of “Aug 22,” offering another poet who wrote meditations on what was growing, there, beneath his feet:

Whitman’s observation of a leaf of grass: How
does he portray it as in motion? How

soon does this happen in the observation? Breath
of life, of course.

The end of wind. Wind’s end. Wind winding
down.

Perhaps this is what Sudbury-born and raised Christakos is deliberately working: through the core of seeking out and maintaining human intimacy and connection—family connection and loss, how one connects through social media, and romantic and sexual hopes, fears and frustrations, all of which has been prompted by an extended period of mourning—writing out her own version of Kiyooka’s Vancouver cycle of mourning and rebirth through a type of tree she would know to be familiar, and of home.