The human is one of many humorous creatures rolled out in the evolution of this planet. Wholly animal, charismatically self-conscious, intellectually ambitious, emotionally feral. Prone to abstraction, estrangement, hubristic fantasies, bitter depression. Psychologically lethal while imaginatively promising. The “we” that are human are no more, no less than part of nature. Nature is the whole of us. Denial of that has been our greatest folly. 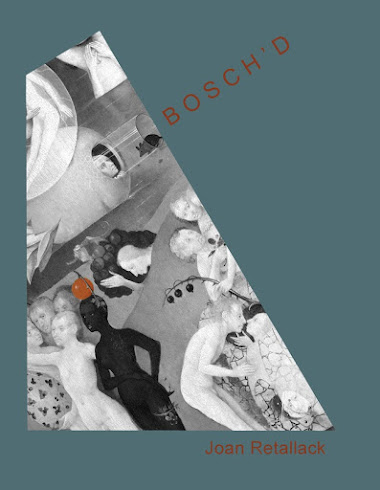 I’m intrigued by American poet, critic, biographer, and multi-disciplinary scholar Joan Retallack’s latest poetry title, BOSCH’D (Brooklyn NY: Litmus Press, 2020), the first of hers I’ve read. Retallack is a poet I’m clearly behind on, given the length and breadth of her publishing history, from books on poetics, artist books and numerous poetry titles, including Procedural Elegies / Western Civ Cont’d / Selected Poems 1970-2008 (Roof Books, 2010). Although it should be noted, that despite whatever other publications she’s produced over the past twenty years, BOSCH’D is her first collection of new poems since the publication of Memnoir (Post-Apollo Press, 2004).

The poems is BOSCH’D are set in two sections, “BOSCH” and “BOSCH’D,” which itself is broken up into numerous sub-sections: “IN LOCO (ON THE SPOT),” “IN LOCO SCIENTIA (MATH & SCI),” “IN LOCO TEMPUS (NICK OF TIME),” “IN LOCO MALUM ET ALTERITAS (EVIL & OTHERS),” “IN LOCO CONFESSIO (SPILLING THE BEANS) BLOOD*LITANY” and “IN LOCO POST SCRIPTUM (AFTERWORDS).” What is the difference between the short “BOSCH” and the extended “BOSCH’D”? The second poem of the opening section, “Bosch [bash, bôsh]” includes a kind of prose poem lyric biography of Hieronymus Bosch (c. 1450-1516), the Dutch painter known for his “fantastical paintings on religious concepts,” writing: “His paintings intermix species of many kinds, / realistic and fantastical. Part-human, part-animal, part-mechanical creatures, ethereal / figures, wily demons—a world filled with the exquisite and grotesque in startling clarity.” She writes of time and absolutes, of saints and statues, including numerous poems with codas: an intriguing boiling down of lyric and language, a Greek-chorus style of end-point reminiscent of Toronto poet Margaret Christakos offering the same, via “THEREFORE” codas, throughout her own wipe.under.a.love (Toronto ON: Mansfield Press, 1998). There is something in the way Retallack expands and contracts her lyric thinking I’m quite taken with, providing both the stretched-out exploration and one boiled down to the bone, both of which still provide an equally-delightful openness.

The exhaustion of truth in language was so
great there was no way to know what one
had to go on as one had to go on going on.

Retallack composes poems as a study of language, of Stein and Sappho, of science; writing the sparks and fragments of lyric. She writes big ideas and small details, exploring the connections across and through physical space, physics and theory, math and myth, philosophy and storytelling, and dreams of the impossible. BOSCH’D includes an array of some absolutely stunning lines in equally stunning poems. At the end of the poem “The Ventriloquist’s Dilemma,” she writes: “Someone will claim / real is a misleading construct. Someone will claim / night flew into a tree. Those five words in a line.” This is a wonderfully complex collection of poems of thinking that can’t help but spark further thinking; a poetry of inquiry as strong as I’ve ever seen, and there are echoes here that remind, also, of elements of Anne Carson, Norma Cole and Kathleen Fraser: an ongoing and deeply engaged poetics of language and inquiry. As Retallack writes to open the poem “St. Anselm’s QED”:

St. Anselm’s Proof of the Existence of God:
God is that than which nothing greater can be conceived:
omnipotent, omniscient, omni-beneficent.