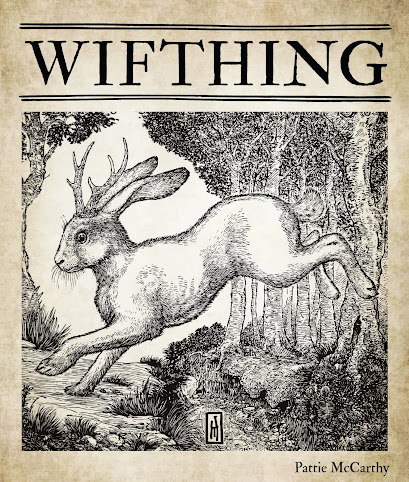 It is interesting to see the finished, full version of Philadelphia poet Pattie McCarthy’s wifthing (Berkeley CA: Apogee Press, 2021) after spending time previously examining two of the collection’s component parts as simultaneously-produced chapbooks: margerykempething (2017) and qweyne wifthing (2017) [see my review of such here]. What had now been seen as separate structures is now built into a larger, uninterrupted, single-length work: a suite of twenty-five individual poems each titled “margerykempething” that leads into a suite of twenty-five individual poems each titled “qweyne wifthing,” before leading into a suite of thirty individual poems each titled “goodwifthing.” Presented as a single, book-length suite made up of short poems instead of as three distinct, discrete suites, how does one thread bleed into the other?

Throughout wifthing, McCarthy blends contemporary perspectives with Medieval experiences in the terrain of women through mothering, daughtering and the dreaded, dissolute “thing-ness” of how female work, thought, action and birth have been devalued generally and very specifically, cited as little more than the property of men. She writes a dialogue of previously unspoken, unrecorded and unheralded women and their experiences, writing to recover the absences and dismissals of history. “you get what you get & you don’t get upset,” she writes, in an early “margerykempething,” “margery kempe gives birth in a hairshirt / queen victoria in a shift nightdress / gives birth nine times & then her daughterthing / gives birth in same            a braid with & against / the wisp              patience is not her pigeon [.]” Or, as the poem that immediately follows opens: “there were two types of daughterthings     the ones / who purposely stepped on ginkgo ovules / & the ones who picked their ways around them [.]” She writes on female agency, from childhood to marriage; she writes on female desire, sexuality, motherhood and the complications that can arise postpartum. Engaged with deep and ongoing research, McCarthy explores the lives of Medieval women, writing the two sides of the long view: “you are the shape of my midlife crisis / margery kempe             where is your body / the cairn to mark you,” she writes, early on in the collection. As she cited in the chapbook edition, “margerykempething” took its title from the Book of Margery Kempe, the manuscript of which that sits in the British Library. It is an edition that sits as a single copy, giving Margery Kempe the title of “first English autobiographer.” When a digital version of “medieval mystic” Kempe’s manuscript was released online in 2014, Alison Flood wrote in The Guardian:

McCarthy herself cites the 2000 Longman edition as her source for quotations, but the 1985 Penguin edition, her “undergrad copy,” as her “sentimental source,” writing out the details of Kempe in a line both straight and slant. The second suite, “qweyne wifthing,” centres itself not on a singular specific text or individual, but on multiple, citing David Baldwin’s Elizabeth Woodville: Mother of the Princes in the Tower and Linda Simon’s Of virtue rare: Margaret Beaufort, matriarch of the House of Tudor. McCarthy has worked into and through the terrain of Medieval mystics, women, their labour, tales of mothering, birth and other related topics throughout the whole of her published work-to-date, all of which have appeared with Berkeley publisher Apogee Press: bk of (h)rs (2002), Verso (2004), Table Alphabetical of Hard Words (2010), Marybones (2013) [see my review of such here] and Quiet Book (2016) [see my review of such here]. As she spoke of her interest in Medieval subjects as part of an interview for Touch the Donkey: