the passive banter of saints 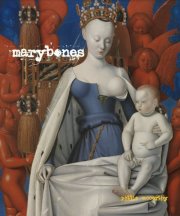 Ever since I was able to include a section of the manuscript-of-progress of Philadelphia poet Pattie McCarthy’s marybones (Berkeley CA: Apogee Press, 2013) in the fourth issue of seventeen seconds: a journal of poetry and poetics, I’ve been eagerly anticipating the publication of the trade version. Over the course of four trade poetry collection, McCarthy sketches out full-length works in similar ways to American poet Cole Swensen, as both poets utilize classical research and information to construct powerfully complex collage-works, composing essays-as-poem, rife with references, asides and contradictions. With cover artwork by the French Court painter Jean Fouquet, “Madonna Surrounded by Seraphim and Cherubium” (1452), marybones constructs a portrait of all and any who have been named Mary over the centuries, from the Mother of Christ and Mary Magdalene to Mary, Queen of Scots and far more contemporary women. marybones is a combined portrait of Marys, a portrait of unwritten women, and unwritten mothers, as she writes, “the difference between unknown & anon.” Hers is a continuity of Marys and how they have been depicted, from literature to liturgy to Medieval paintings; and, through their depictions, McCarthy works to give them dimension and dimensions, and, finally, voice.

Mary
was filling her habeas corpus. was naming her daughters Patience & Fear. was one of only five grown women to survive that first winter. was placing an ad during the British occupation of Philadelphia that read, in part, a wet nurse, who has a good breast of milk, only five weeks old, would be willing to suckle a child on reasonable terms. was spotted, yellowish, under a viaduct in Chicago on 10 April 2005. was hanged on Boston Common. was born on 20 July 1645 & married at sixteen. was writing thank-you notes for the oysters her brother sent & returning the favor with upstate apples. was engaged in questionable close & continuing contact with a foreign national. was a brilliant scientist, who was, for whatever reason, forced to investigate the world from a black & white room via a black & white television monitor. was what happens when we see a ripe tomato, or the sky. was a swallow. was not, alone, enough to make a summer. was carrying a visiting card from Mrs Wotherspoon. was well off the boil. was discovered on 4 December 1872 under full sail, abandoned. was a second lieutenant & present for the first study group. was shifting with the salt line or salt wedge. was hunting fossils & selling sea shells by the seashore.

One thing I have always admired McCarthy’s writing for is her use of language, staggering and pausing for deeper effect on a canvas far wider and broader than most poets might normally use. For the poems in marybones, she lists her sources at the back of the collection, and they include the letters of Samuel Beckett, Ezra Pound, Lorine Niedecker, Dante Gabriel Rosetti, Paul Muldoon, T.S. Eliot, Virginia Woolf, Susan Howe, The Diary of Samuel Pepys, the Salem Witch Trials and Mary, Queen of Scots. Given her use of real information, how she uses that information is almost the opposite of documentation, using the language to create and compound something new, as opposed to simply repeating facts. She breathes life to the notes, and creates connections between things that had previously never existed. Like the fairytale Jack, the portrait of the mother, Mary, is as universal as it is speculated, and never from Mary’s own voice. The author of the trade poetry collections bk of (h)rs (Apogee Press, 2002), Verso (Apogee Press, 2004) and Table Alphabetical of Hard Words (Apogee Press, 2010), as well as the chapbook L & O (little red leaves e-editions, 2011), the progression of her works has been staggering, especially given the strength of her work right out of the gate. Constructed as a poetry collection that explores voice, motherhood and the complications of identity, marybones is an incredible work.

Posted by rob mclennan at 9:01 AM
Labels: Apogee, Pattie McCarthy