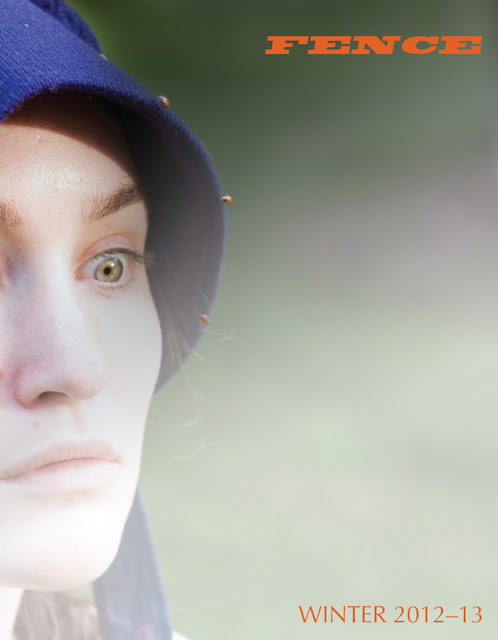 After they made love the first time, things got strange. He peeped out through the window blinds, shook himself like a dog, and muttered something about the moon. Then he said, “You must chain me in the closet. Whatever happens, don’t let me out. Lock the door. There’s a deadbolt.” She was drunk and naked and limbic, not thinking with her forebrain. “Then what?” she asked flirtatiously. (Douglas Glover)

After some five years of hoping and trying, I finally managed to get some work into an issue of New York State journal Fence magazine, newly arrived in my mailbox. It’s quite thrilling to have a poem alongside new work by Douglas Glover, Rusty Morrison, Noah Eli Gordon, Karen Garthe, Natalie Shapiro, Catherine Wagner, Sarah Fox, Graham Foust, Stephanie Ford and so many others. As well as the issue itself, this issue also features a “Fiction ebook supplement,” with new writing from Chanelle Benz, Alfred Brown, Lydia Davis, David Gordon, Gabriel Heller, Jay Caspian Kang and Rachel Levy (that admittedly, I haven’t had a chance to get into). Generally, I’ve been impressed by the breadth and the quality of each issue of Fence, and every issue contains a surprise, and there are more than a couple within. I’m intrigued by Graham Foust’s poem “Collected Poems,” that begins:

Names for poems—why do I, on Earth, bother?
Some untitled verse is out there just waiting
to be used, like a life vest or a rifle
or an almost impossibly large number,
my noise-only memory’s noise-only ghost.

Emily Pettit, with her poem “Water I Have Seen A Duck,” is slowly becoming a favourite, and there is some remarkable work by a number of other poets, both familiar and unfamiliar to me. I’m attracted to the oddness of Brandon Downing’s poem “DICK CARLA ASTRO,” a four part sequence that begins: “Her breasts shot right out her shirt. / I have one of the things instantly // In my jaw. Both her hands drop / Down—[…].” I’ve seen fragments of Noah Eli Gordon’s work-in-progress “The Problem” in a few places now, and the ten pieces included in this issue of Fence are just stunning. I’m amazed by these prose-poems, each with the same title. I’m amazed by their sharpness, and variety. I’m envious, even. When is this finally to appear in book form? Part of the strength of this work comes from the accumulation of short pieces, each a stand-alone problem.

Through Gordon’s work so far, some half dozen trade collections or so, each work exists as a stand-alone project, something I’ve long been attracted to, and with each title, his work becomes sharper. Already I’ve seen a notice for a new title of his to appear in 2013; but what, I ask again, about this one?

The entry for fetus in the dictionary given to her by her mother reads, simply: see embryo. Because there is no entry for embryo, the problem refuses further development. It just sits there expectantly, sort of moving, but not really. Well, maybe a little.

The issue also includes a selection of poems in translation, as Kevin M. F. Platt describes in his introduction to the short section, “Poetry as Global Project,” writing:

The five poems assembled below illustrate how poetry, aided by an internet infrastructure, is crossing borders as never before—not only geographical but also linguistic ones. In March, 2011 twenty or so Russian and American poets, scholars, and translators assembled virtually—via document cloud—to work on new translations from across the Eastern seaboard of the US and from locations in Russia stretching from Kaliningrad, Russia’s outpost in Eastern Europe, to Novosibirsk in Russia’s Asian expanses.
Two months later, with drafts of some fifty poems in our virtual hands, this group gathered physically in Philadelphia to polish translations at a symposium sponsored by CEC Artslink and the University of Philadelphia entitled “Your Language—My Ear." The results are far more extensive than anything that could have come about without the internet run-up to the symposium, and they are far more refined than what could have been produced by translators working in isolation.