After death there’s no heaven or hell, no angels or devils, the poet writes. There’s only a feather. It swings in the air. Gently, the feather settles on the ground.

I’m charmed by Korean poet Moon Bo Young’s newly-released Pillar of Books (Boston MA: Black Ocean, 2021), translated by poet and translator Hedgie Choi, currently a fellow at the Michener Center for Writers. Through the translations, at least, Choi presents Moon Bo Young as a poet of sentences, from the lyric to the prose poem. “When the book is opened,” the piece “THE BOOK FROM FAR AWAY” begins, “the sentences are immersed in creating / double knots. They twist their bodies constantly. Like little bugs under / a rock, they repeat pointless motions for years. The sentences burn / black at the edges because they focus only on themselves.” The lyrics extend across thought, offering a mix of humour and joyful observation, odd commentary and contemplations, such as this fragment of the poem “BRAIN AND ME,” that reads: “The brain has one defect. It remembers more than it sees. A considerable amount of DNA gets damaged as a result. What mechanism does the brain use to make memories? This is a very difficult question, but since the etymology of the word for the brain’s nerve cell, neuron, comes from rope, we can guess that a rope is used.” I’m charmed by the poems within, and by the introduction by Choi, laying out an array of the difficulties she had in working on this particular translation (including the fact that “Korean has distinctive sentence-ending particles,” the mixing of tenses, pronouns and conjunctions), as well as some of the joys:

Moon Bo Young is both super-funny and super-serious. “Down Jacket God” is a good example of this—it’s also the first poem in her book. There’s levity and surrealism, but there’s also God and Death. The poet exists explicitly in this poem, breaking the fourth wall and writing in real time, but it seems like an exaggeration to say that this ironic move “undercuts” the rest of the poem. Rather than undercutting, there’s juxtaposition and playful interaction. These elements are all there, together—God and Death and Love and Literature hanging out with feathers, chopstick, a blanket being dusted, and little bugs—and the poet is tinkering with all of them, without reverence but with great curiosity. 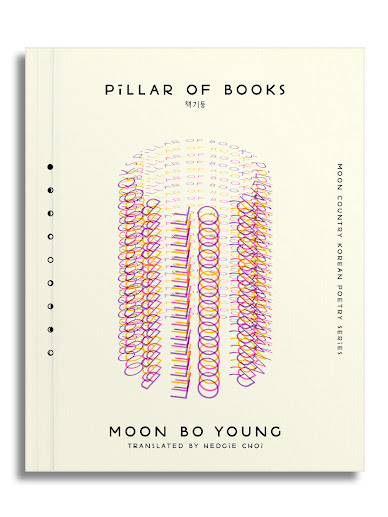 The structural considerations between Korean and English, at least laid out by Choi regarding this particular translation, offer an intriguing insight into both the Korean language generally and in Moon Bo Young’s work specifically, and make me wonder about the use of language-play by contemporary Korean poets. This is something that was also brought up in the recent Yi Sang: Selected Works, edited by Don Mee Choi (Seattle WA/New York NY: Wave Books, 2020), translated by Jack Jung, Sawako Nakayasu, Don Mee Choi and Joyelle McSweeney [see my review of such here]. I find it interesting that Boston publisher Black Ocean has established the Moon Country Poetry Series, publishing English translations of poetry titles originally published in Korean by contemporary Korean writers (all of which include design-echoes each other), a series that also includes the recent Whale and Vapor (Black Ocean, 2020) by Kim Kyung Ju, translated by Jake Levine [see my review of such here]. As the series self-describes, at the end of the collection: “Moon Country publishes new English translations of contemporary Korean poetry by both mid-career and up-and-coming poets who debuted after the IMF crisis. By introducing work that comes out of our shared milieu, this series not only aims to widen the field of contemporary Korean poetry available in English translation, but also to challenge orientalist, neo-colonial, and national literature discourses. Our hope is that readers will inhabit these books as bodies of experience rather than view them as objects of knowledge, that they will allow themselves to be altered by them, and emerge from the page with eyes that seem to see ‘a world that belongs to another star.’”

The research center is a cube building with a neat chimney plunged into the right side. The researchers are covered head to toe in white cloth. Unrelatedly, they are sexless. They don’t draw lakes in forests. They don’t play classic guitar.

The endless sound of plastic curses mankind: through endless observation, experimentation, and verification, this hypothesis is becoming as scientifically sound as the flight formation of migrating birds. All existing types of truth have the same status. Researchers, who are pursuers of truth, dream of egalitarianism.

Truth goes beyond consent and nonconsent, tolerance and distrust. The researchers prefer facts over truth and falsehood. As a matter of fact, facts have no feelings. Facts don’t require consolation.

What the researchers are fond of isn’t a picture but a photo. This photo—which required over two hundred million altitude measurements, which is a combination and synthesis of over a thousand photos, which shows the entirety of the surface of Mars—illustrates what form of love the researchers are pursuing.

The collection of facts isn’t a matter of taste. The researchers want a revolution.