Muriel Leung, IMAGINE US, THE SWARM

I wanted to write a book about Orpheus and
Eurydice, how they lived and died and died again.

How hellish, discovering that the journey was not
enough, even at its end, that impulse to look back,
which is like admitting grief is a form of self-sabotage.

And then she was ash.

(“THIS IS TO LIVE SEVERAL LIVES”) 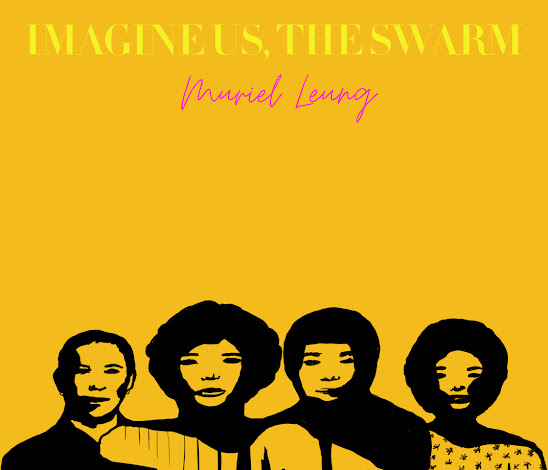 Southern California poet and editor Muriel Leung’s [see her ’12 or 20 questions’ interview here] second full-length collection is IMAGINE US, THE SWARM (New York NY: Nightboat Books, 2021), following her debut, Bone Confetti (Las Cruces NM: Noemi Press 2016). IMAGINE US, THE SWARM is a suite of seven poem-sections constructed out of long lines, fragments, accumulation and space on the page to, as Kazim Ali suggests in his blurb on the back cover, “confront loneliness, silence, and death.” Leung writes out how stories are remembered, and told; and how stories tend to shift over time, blending and even twisting details. “[.]…….. a story which / begins with…….. / a death and ends…… / ……with a study…… / of a life of labor…… / …….done with such / seeming ease [.]” The lyric here is expansive, and Leung utilizes the pause, and the halt; writing out moments and movements of memory and hum, grief and the metaphor of bees. “Once, when I was very, very young,” she writes, to open the collection, “I studied the curious lives of bees // their steadfast and synchronous labor // thinking of what it means / to be at once [a colony] and [alone].” From there, Leung writes of solitude and the swarm, and of what the collective might be capable of, as well as the failures that occur from within. Referencing her father in the opening section, she writes: “I set out to write a book about [    ] but it was about [    ] instead. After he died, [    ] was all that was left.” Two pages further, she offers: “To write a book is to write into a future and I am not ready.”

She writes of family and family histories, death and loss, and enduring years of racism, writing through an ongoing sequence of acts of difficult histories, resistance, survival and support. She writes of her father’s cancer, and her mother’s cancer, and of her grandfather. She writes of her father’s harrowing migration from mainland China to Hong Kong, and the difficulties he faced even long after he landed in the United States. In an interview posted March 22, 2021, conducted by Julie Leung for The Sundress Blog, Leung responds: “The myth of my father’s migration, of my grandfather’s before him. The myth of celestial bodies. The myth of Greek poets who search the depths of hell for their love, losing them once again. One definition of a myth can be that it is a story that is not concerned with a truth grounded in realism but that communicate an emotional lesson. What did I learn? My familial history is barbed and contains a legacy of pain. On occasion, someone has tried to reverse it. Did it work? I am asking.” As part of the second section, she writes:

What my father had was Stage IV pancreatic cancer, discovered at the late stage of its development. Confused for an ulcer, he had put it off, thinking it was his body’s knotted revenge for years of abuse. He had survived arrest once, caught in the waters while swimming to Hong Kong where he had hoped to board a plane with his sister to the U.S. On a subway platform late one night, on the way home from work, he was mugged and stabbed in the stomach with a pocketknife—that too, he survived. It came as no surprise then that the earliest signs would register as anything but its awful truth. How the proliferation of the years can wear on a body. Unraveling towards the end of his life, he began to look like the assemblage of his many parts. He was very much afraid. In collecting him, I saw what I knew was a strange biology that willed its way across several histories without subjecthood or nation. And this: the lone cancerous cell glows the way the busiest terminal of a city fills with people in the hour of its utmost vitality.

Leung writes the structure of the swarm and the suggestion of bees very different than, say, the poet-deliberations on and around bees by some of her contemporaries, whether Toronto poet Andy Weaver’s debut, Were the Bees (Edmonton AB: NeWest Press, 2005) [see my review of such here] or Vancouver poet Renée Sarojini Saklikar’s second full-length collection, a poetic collaboration with scientist Mark Winston, their Listening to the Bees (Gibsons BC: Nightwood Editions, 2018). Leung’s notion of the community/swarm might be closer to New York poet Tonya M. Foster’s full-length debut, A Swarm of Bees in High Court (Brooklyn NY: Belladonna, 2015) [see my review of such here]. “I think it’s funny that the book is not about bees at all,” she writes, as part of the opening piece. As part of the poem/section “LIFE OF A DROWNING,” she writes: “I kiss the flooding and it kisses me back. Grief pours through me like a sieve. Its aftermath of sand and salt / debris grows heavy at the banks. I kiss that too. […] What does it mean that our lungs are 90 percent water, and yet, we are capsized every time?”

the unkindness of being :: when I feel my feeling warped

in the lining of a thickening wall :: the triumph of water corroding the frame

femme :: a sickle :: copper flesh inside a thorn :: within the writing

of what it means to be a body :: tired of being a body

(“I MARVEL AT THE NOISES A MORE PERFECT VENGEANCE MAKES”)

IMAGINE US, THE SWARM is set in five extended poem-sections—“THIS IS TO LIVE SEVERAL LIVES,” “THE PLURAL CIRCUITS OF TELL,” “A CAREFUL LIST OF ALL MY FAILURES,” “LIFE OF A DROWNING,” “DEAR INTIMACY OF [THEORY],” “I MARVEL AT THE NOISES A MORE PERFECT VENGEANCE MAKES” and “WHEN I IMAGINE ALL THE POSSIBILITIES OF THE SWARM”—that are each composed as extended thoughts into a graceful and meditative lyric on language, family and belonging. “To bend so far back,” she writes, as part of “A CAREFUL LIST OF ALL MY FAILURES,” “my spine becomes another flag. Of assimilable colors. // And I am not even legible to myself. Cannot not even English my way out.” Further on in the same poem, she writes: “in a nation of proximity and degree / what is my likeness to a thumb? / the brutal texture of my race beside another? // the history of my particulars / only a fraction of a tower [.]” Leung writes moments small and large, unique gestures that stream across a sequence of white spaces. “One winter,” she writes, to open “LIFE OF A DROWNING,” “I stepped out of my house and planted my body in a patch of white snow. I wanted to know / what it would be like to be both anvil and a green shoot. I slept there. I forged a surrender in the ground. // Though I lived, the snow grew inside me in the years to come.” There are such stunning and striking fragments in this collection, stitched together brilliantly as both a series and sequence of threads, and a quilt of patchwork lyric, held together through the strength of each fragment and the connections between them. She writes of ghosts, both familial and otherwise, echoes that can’t help but impact and influence, including the penultimate section, which she describes in her notes as “an ekphrasic work based after Park Chan-wook’s Lady Vengeance (2005). Geum-Ja is the name of the female protagonist who was falsely imprisoned for 13 years after a child murderer, who also happened to be her former teacher, forced her to confess to a crime she did not commit.” The structural accomplishments in this collection are quite stunning, as she utilizes a variety of lyric shapes and forms, long lines and fragments, to put together a book-length suite on loss and love, family and story, and what might be possible to learn from all that has come before. This is a remarkable book.

There is no joy in the after.

Geum-Ja places her face inside a tofu block.

Her daughter, witness to this long cord of shame.

The deed is done, but life goes on.

The cart of loss proceeds ahead, unthrwarted by the cause.

Nothing to stuff the mouth of its redemption cry.

A ghost is still a ghost even when it finds its everlasting body. (“I MARVEL AT THE NOISES A MORE PERFECT VENGEANCE MAKES”)