Tonya M. Foster, A Swarm of Bees in High Court

To be—the water
that bandies a body, the
body of a once

young wo/man on
a bayou of sound & words in
the pre/ab/sense of sleep.

To be—a boat as
in raft or pontoon. Each word,
a boat in which s/he

is, in which s/he is
sentenced and bandied about.
To be about to…

To be bandied about by water,
to be busted and broke,
to be bored, grief-bore, work-bore.

to be backache, bone of nightshifts,
to be barren as salt lick, to bear bellyache and bloat,
to be news and less.

To see and to be
seen?—what it is to live on
perennial blocks.

Her voice, no matter how loud or clear, is rendered silence, his do—
shadow projected across a page, across a street, an age, across
two bodies in bed. (“AUBADE”) 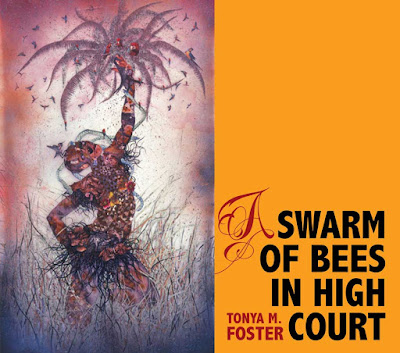 Harlem, New York poet Tonya M. Foster’s first full-length poetry collection is A Swarm of Bees in High Court (Brooklyn NY: Belladonna, 2015), a rhythmic free-style of sharp and precise poems on the immediacty of her space. Her lyrics are dynamic, electric and performative, composed as chants, mantras, sing-song description and sly monologue. Constructed as a book-length poem tied very much to the intricacies of place, A Swarm of Bees in High Court is passionate and tactile, descriptive and vocal; a book very much meant to be heard, and, through her writing, sings off the page. Her poems are infused with lyric, word and soundplay, playing off spoken as much as written language, writing: “be low be lack be ridge and grudge / be longing be sotted be ramble and hold / be come and go; be rim and ram the ball into the basket. / be ram-in-the-bush important / be stung be ache be ring / be stung be ache be ring / be reft and reach over / be attitudes of bee sting[.]” Her poems are declarative (“Grammatical I / ons: shit happens, shit be done / happened, shit be. //// Grammatical “I” / says, “Am.” “Am.” “Let.” “Am I?” “I’ma / tell Mama.” “I am.””), demanding attention and action, calling for critical thinking, and explore an appreciation for the complexities of human interaction and being, all set within the urban setting of Harlem, New York. This is a love song to a neighbourhood and a population that pulls no punches, writing on violence, race, gender and culture; mourning losses and celebrating victories.

Built in thirteen sections—“HARLEM NOCTURN/E/S,” “IN/SOMNIA,” “IN/SOMNILOQUIES” “AUBADE,” “BULLET/IN,” “HIGH COURT,” “B-BALL,” “SWARMS,” “HARLEM NOCTURN/E/S 2,” “TO SHAKE OR BE SHOOK DOWN,” “A GRAMMAR OF WAKING,” “A GRAMMAR OF WAKING: BAREFOOT AND GRASS” and “NOTES: TITULAR LINEAGES,” the title of the fifth section, for example, plays off breaking news and a painful reality of urban life in the United States. Hers is a bold, confident and articulate declaration, and her language is vigorous, pulsing and unyielding, such as the opening of the section “B-BALL,” that pounds and sings:

Bounce-slap goes a ball
on a dark court. Hands, knees, and
feet block slam and pass

Bounce-slap goes a ball;
drilled-in-eye-dreams till concrete
with motion and sound

Steel comes in
these forms; blade, beam, molten, to
feed, open, will, release

Bounce-slap goes a ball,
a hand. In memory, the
eye is quicker

To end the collection, her “NOTES: TITULAR LINEAGES” reads:

The vibrant chromatic chaos and the haunting title of Max Ernst’s painting—A Swarm of Bees in the Palace of Justice—were two of the triggering tunes for this poetry. I first encountered the painting in the mid 1990s at The Menil Collection in Houston. For years, a small notebook carried the title and a small off-color reproduction of the work. I found myself turning, over time, to the question of how I might contend with Ernst’s parsing of a visual field.

Several unfinished pieces were written as riffs off of Ernst’s provocation. Some pieces and lines focused on “color,” on relationships and hierarchies between and among hues. Other pieces focused on a sense of fragmentation evoked by the small two-dimensional areas allotted to each color on the broad field of Ernst’s painting.

I had held onto Ernst’s title and the small color copy for years, carrying them with me in my moves from Houston to Jersey City to Harlem, making notes along the varied ways of language, images, moments than seemed somehow related, seemed like green offshoots of Ernst’s multifaceted title. At times, my notes, lines, phrases focused on the swarm, as collective or group or as mass, and, also, swarm as movement.

Bees are communal, plural, public, unindividuated, corporate, en masse. “Bees” triggered images of bees, of course. The bee also becomes s/he, syllable, sound—“b” and to be. I began to understand the problem of how to contend with the myriad impulses provoked by the painting as a problem of form. First, I changed the title. There are no surviving palaces or much talk of palaces in Harlem. There is a basketball court, where one might through practice and chops rule. There is a constant courting on stoops and corners. There is the etiquette of courtship. There is the train to the courthouse. There are the nearby cops who card neighborhood congregants. There is the height of the hills, the height of the apartment buildings, the height of the cameras focused on streets and doorways and the small Saint Nicholas Park. There are myriad highs, highs from rocks, totes, and forties. High-tops hanging from phone lines. There is the high of the noisy and high-flying ghetto birds that flash their brights some early summer evenings. A Swarm of Bees in the Palace of Justice became A Swarm of Bees in High Court.

I began to think about and collect language of the place—the people and things that occupy the place. This is a biography of life in the day of a particular neighborhood. The cameras, bodies, televised portrayals, voices, and doorways of the place demanded a different pronoun for dealing with the multiple as subject and as swarm of actors.