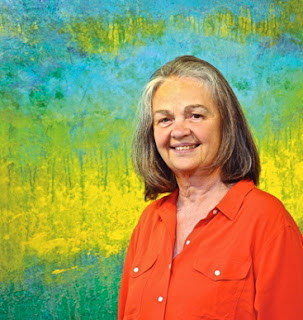 Kristjana Gunnars [photo credit: Cindy Goodman of North Shore News, Vancouver] is a painter and writer, author of several books of poetry, short fiction and anti-fiction. She is Professor Emeritus of Creative Writing and English at the University of Alberta, and now works out of her studio in B.C. Her current work-in-progress is a poetry collection titled “Snake Charmers,” a selection of which just appeared as a chapbook with above/ground press. Her web connection is: kristjanagunnars.com

She was writer-in-residence at the University of Alberta during the 1989-1990 academic year.

A: I was in the middle of my “quintet” of mixed-genre publications with Red Deer Press when I was invited to be w.i.r. at Alberta U. I was at the time writer in residence at the Regina Public Library and this seemed like a logical next step. I missed the academic atmosphere, so was glad to get back to it this way. I was interested in exploring new avenues in writing just then, to be involved in front-line writing theory, and the U was a good environment for that, many interesting colleagues and students there. At the time I was not very interested in the commercial aspect of writing and book publishing, but more the philosophical and theoretical. That’s not to say I didn’t want to sell books etc., all that, but rather if that’s all you’re interested in (numbers and attention) the writing life just dies. It’s dead, and writing becomes a kind of rat race. I’ve always enjoyed reading and researching, so in a way coming to the UofA as writer in residence was a kind of heaven. Good bookstores and libraries and people. In fact, I ended up staying there for the next 14 years, joining the faculty, so the opportunity in the first place was pretty important.

Q: How did you engage with students and the community during your residency? What had you been hoping to achieve?

A: At the University of Alberta the schedule of meetings with writers was very packed. I met with writing students and students who were not in the writing program, as well as faculty members who wanted comments on their writing. I also had a lot of people from the broader community, from all walks of life. They all had interesting stories to tell. Many were in life-changing situations so the meetings could get intense.  I believe, and hope, the people who came to me benefited. Aside from the writing critiquing, I also gave readings and talks, not just at the university but also in many places in the community, around the province. And I continued to do readings of my own around the country, and to attend conferences.

After joining the UofA English Department, I was in charge of the writer in residence program myself for many years. I selected writers from around the country for a residency and negotiated with them to come. Once they were there, I acted as liaison person for them and stayed in touch during their term. I know that every writer has his or her own interests, and found things to do that were unique. In each case, every new writer added something to the program. Some gave extra lectures, visited classes a lot, produced panel discussions, even comedy performances. Most found friends, many lifetime friends, among the community. Some partied more than others, some pursued private interests alongside or were involved in publishing local writers.

What I hoped to achieve as writer in residence myself was pretty basic: to be a valuable resource for the community of writers in Alberta and at the university. You don’t always know the value of what you are saying to writers about their work, but you can hope there is real growth involved and you can try your best, knowing there is no final response to art.  There are only suggestions to be made. Art is art; the artist, and writer, needs to figure it out in private, and all the critic can do is offer observations. I don’t think you can actually tell a writer what to do, unless it’s an obvious thing that crops up. And of course you can warn writers they are heading into questionable territory, or making themselves vulnerable to criticism they had not foreseen.

Having seen this from both sides, I’d say to be a writer in residence the most valuable asset is yourself. To be yourself and bring with you the things you excel in.  Make your stay as writer in residence memorable for who you are and add what you can of your own to the existing template.

A: Aside from meeting wonderful writers and colleagues, I was glad to see some of the manuscripts I worked on with local writers come into publication. Also, gratifyingly, some writers I met then have become important writers in Canadian literature. That has to be the best accomplishment. That year I was seeing the publication of the second book in my series of five cross-genre books with Red Deer Press. This book, Zero Hour, was gratifying to see in print and it was received well. I did a number of readings and such around it. I feel that work, which was the first time I tackled the issue of loss in writing, was rewarding on many levels, not the least of which was that readers were able to share their stories and the idea of loss in general became much bigger. The book was nominated for the GG’s at the time as well, and won an Alberta book award, all of which helped me in my journey. These were personal accomplishments, but for a writer they are important milestones.

This was also the time I began to worry the issue of genre in Canadian literature. I was hoping to enlarge the discussion of genre and open up an acceptance to texts that did not seem to adhere to any genre; that were not novels, not essays, not memoirs, not poetry, per se, but that could be all of these at once. I never liked the sense of being “trapped”, and the idea of genre—meaning if you’re writing a story you should conduct it like a proper story, and if it’s a poem then certain unwritten rules apply, etc.—always did seem like a form of entrapment. I began a study of how I could talk about this within the academic framework, and I continued something I had started back at the University of Manitoba in literary theory. That project has stayed with me since. I am gratified to see that cross-genre books are now frequently published in Canada and well accepted. If I have contributed to that development at all, I would consider it a big accomplishment. Being writer in residence at the U. of A. gave me a chance to focus on and consolidate many of my ideas in this area.

A: I should correct you a little bit. I am an Alberta writer. I was in Alberta so long, was involved in the Alberta writing scene for many years. I still consider myself an Alberta writer; something that began before I first moved there, through the Markerville Icelandic connection and my work on the translation of Stephan G. Stephansson, and not to mention, my publisher was at Red Deer. But my year as writer in residence was my first year of actually living in Alberta, so at that time I may not have been an Alberta writer as such.

The landscape of Alberta has influenced me, as have the landscapes of Saskatchewan and Manitoba. In particular, the farmland and low hills around Markerville became very close to me. I was in particular influenced by Robert Kroetsch, his Alberta works, esp. Badlands and Seed Catalogue. I was also greatly influenced by Rudy Wiebe. At that time they were both a strong part of the literary scene in Alberta and there was a lot going on around them. They provided a kind of cohesion to the literary community at the time, and were very encouraging. That time I also met Myrna Kostash and Aritha Van Herk, both very strong voices and they too held a lot of influence. At the time of my writer residency, I had the sense that a bolt of energy had hit the writing community and there was a lot of excitement about the future. A very good time to move into the scene.
Posted by rob mclennan at 8:31 AM
Labels: above/ground press, Kristjana Gunnars, University of Alberta, writer-in-residence