the end of another school year: a stay-at-home story, 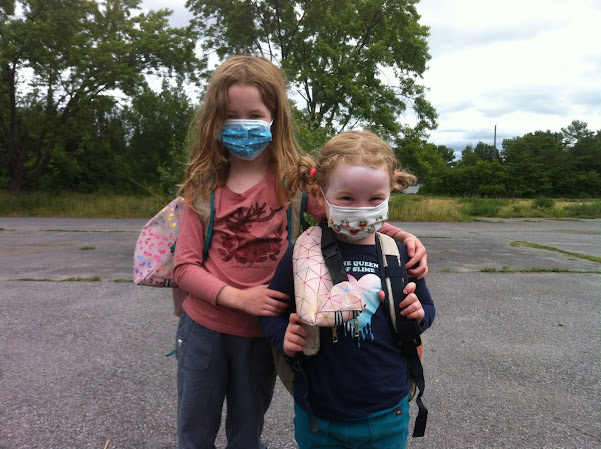 Today is staycation day #468: yesterday, our wee monsters completed their full year of Covid-era e-learning [see my first day of school report here], from their respective corners of our main floor. Rose has completed grade two from our dining room table, and Aoife has completed junior kindergarten from a desk set up at the far end of our living room. Will they be virtual or in-person by the fall? As it stands, we’ve got them signed up for virtual, awaiting further progress in vaccinations and other precautions (I had my second this past Friday, and Christine had hers yesterday), including where we might be for them to finally receive theirs. I would have concerns sending unvaccinated children to interact with other vaccinated children, especially through the Delta variant. We both keep watch on information provided by health officials, CBC News, etcetera (as well as city, provincial and federal numbers, I’ve also been watching the numbers through eastern Ontario via Cornwall’s Standard Freeholder, which seem easier to track and scan than what I’ve caught via The Glengarry News). I’ve been quite amazed at what their teachers have accomplished, with both of them working through French Immersion, and Rose requiring a bit of extra help for her reading (which her two teachers offered, one rather early on, to assist with through post-school solo sessions). Rose’s reading ability has improved vastly over this past school year. She’s worked enormously hard, and it shows. 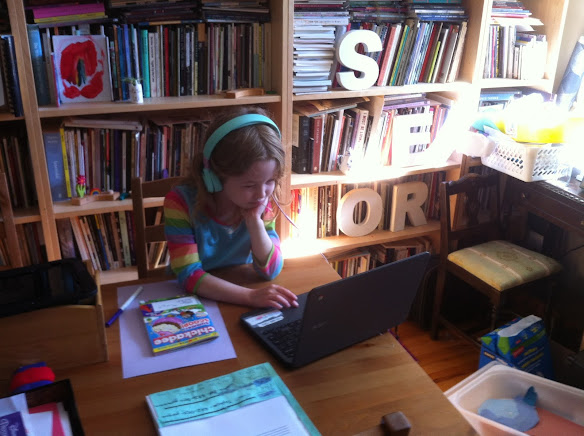 Throughout, Christine and I have taken turns lifeguarding from our living room couch, as Aoife requires a bit more attention than Rose does (but Rose does also have requests or whatnot that require at least one of us to be available). I have predominantly sat through their morning sessions (9am-11am) and prepared both their breakfast and lunch, while Christine has focused on afternoons (noon-1:45pm, as well as Rose’s extra reading sessions at 2:30pm). Otherwise, Christine is in her office (our sunroom, converted), and I am in my office (a small bedroom space we set up when we originally moved in). Given Christine’s high-risk status, we weren’t comfortable with sending our young ladies to in-person school, so didn’t have to worry about the back-and-forth of closures and openings, and managed to establish a good household routine last fall. Christine’s work was flexible enough that she’s been able to work from home, and I’ve been more than thirty years building that muscle of being able to work just about anywhere (coffee shops, taverns, airplanes, mall food courts, greyhound buses, university libraries, etcetera) that, as long as I can have some quiet space and a bit of time, I can at least get something done. I attempt to work through and around their school schedules. 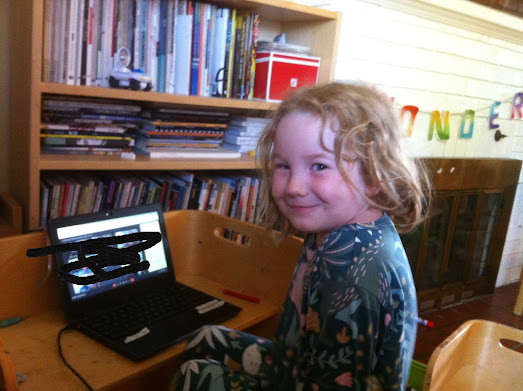 There will certainly be some social considerations to be aware of for our young ladies, given their lack of other human interactions over the year, although Aoife has made at least two friends online (she is able to have “free time” in teacher moderated “rooms” with some of her classmates as part of her after-school sessions, and we’re hoping to figure out further online interactions with at least one of her friends via already connecting with one of the parents). At least their sessions of forest school were still possible, but for those stretches of further Ontario lockdown: the young ladies masked in a small group of children, all of whom were outside learning about plants, trees, frogs, etcetera. Rose has been attending sessions of forest school (predominantly Tuesday afternoons) since she was kindergarten age, and this current session, which ended this past Tuesday, was Aoife’s first—we had to get special permission for Rose to join her in that group, as she’s technically aged out: she wanted to join her sister for her first, to make sure everything was okay.

Summer will mean our wee monsters more often in the backyard, including the wading pool. It will also mean a short burst of ‘summer school’ for Rose, who needs a bit of a further assist—I think Christine has signed Aoife up for German language classes at the same time (which should be interesting). And I think they have bike day-camp at some point?

We are most of the way through the dark, it would seem, although most are still nervous, still uncertain, still not sure exactly what protects what and from whom and from how. Even the science is still figuring all of that out, although this is still changing daily. We will get there, I know. It is all just a matter of time.