Settlers, over the land, over the sea
over the tile, over the stone floors
settlers over the furs, over the pinewood planks
of the house settled, the houses settled into the ground
the houses so buried; settling
pulling life like splinters
from the toboggans & caravans pulling cargo
settled out of suitcases, settled down
we settled in & so settled we
into our ways & with those ways did we settle
for this emptying of history
for this sternum rent in two
for this conscience as quiet
as the snap of a wishbone
sucked white. 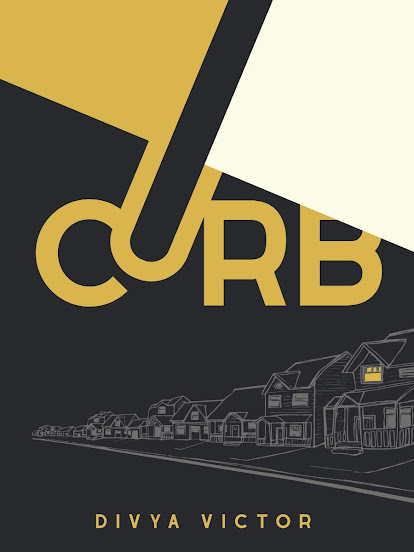 The latest from Divya Victor is Curb (New York NY: Nightboat Books, 2021), a powerful and, at times devastating, book-length poem centred around grief and racial violence to a population regularly and routinely challenged on their right to simply exist. She speaks of the strength of community, even through unimaginable heartbreak. As the press release offers: “Divya Victor documents how immigrants and Americans navigate the liminal sites of everyday living: lawns, curbs, and sidewalks undergirded by violence but also constantly repaved with new possibilities of belonging. Curb witnesses immigrant survival, familial bonds, and interracial parenting in the context of nationalist and white-supremacist violence against South Asians. The book refutes the binary of the model minority and the monstrous, dark ‘other’ by reclaiming the throbbing, many-tongued, vermillion heart of kith.” Curb exists in the shadow of routine and repeated racial violence against South Asians, specifically in wake of, as the press release reminds, “our post-9/11 political landscape.” She writes the wounds and conflicts, citing specific examples of violence that her poems respond to. Victor is the author of five prior full-length collections—Goodbye John! On John Baldessari (2012), Partial Derivative of the Unnameable (Troll Thread, 2005), Things To Do With Your Mouth (Les Figues, 2014), Natural Subjects (Trembling Pillow Press, 2015) and Kith (Book*hug/Fence Books, 2017)—as well as the chapbooks SUTURES (2009), Hellocasts by Charles Reznikoff by Divya Victor by Vanessa Place (2011) and UNSUB (2014).

Curb is constructed in thirteen poem-sections blending the lyric with prose, blending the personal with documentation, writing out responses to both general and specific instances of racial violence. Writing discomfort, grief and trauma, Curb is document, testament and testimony; naming the victims, the assaults and the assaulters. As the poem ‘PAVEMENT,” composed to respond to the assault and death of Divyendu Sinha in Old Bridge, New Jersey in June 2010: “I forget the his name walking up the stairs / all the fricatives abandoned in the basement / where I read the his news reports—early casualties // at the foot of the my desk. these dog eared returns / never lead me to him you only / to myself [.]” In an essay posted on April 30, 2019 at Harriet, the Poetry Foundation Blog, “>>[WOMAN WAILING]: On the Problem of Representing Trauma as a Brown Woman Within the Institution of Poetry,” Victor writes on her concerns around writing cultural trauma through poetry:

FACT (confessional): I worry, all the time, that my work participates in the maintenance of whiteness’s comfort with itself—a comfort which easily assimilates the processes of learning and understanding “cultures” constructed to sustain and affirm its hegemonic position. I worry that I work, through the defaults of my historical and social positions, in Feel Good Incorporated without my consent. Because I participate within discourses and fields which have worked, overtime, to exclude women of color, I worry all the time that I’m going to write, forever and until I die, for the enlightenment, comfort, and spiritual rehabilitation of white people. Worse: That I will write and perform, for as long as I live, about the death of my kind, for white people who will survive. Put another way, I worry, like Prageeta Sharma has, that my lexicon and my body are bound up in “cheap signaling.” Put yet another way (& to draw on Dawn Lundy Martin’s phrasing), I worry about populating a grave of “bodies that are unaware of their utilitarian bluntness in the symbolic order of race.” I experience this worry as a fear: a fear of permanently orphaning of my future-self at the stoop of Poetry, capital P.

In many ways, the book is anchored by the sequence “Threshold,” the seventh of the book’s thirteen sections. A sequence in eight parts, it is one of numerous pieces throughout the collection that responds to a particular example of violence, and the poem’s post-script reads: “February 22, 2017. Srinivas Kuchibhotla was shot in a bar in Olathe, Kansas, by Adam Purinton, a white supremacist who believed that Kuchibhotla was an illegal immigrant from Iran. The shooter yelled, ‘Get out of my country!’ before he shot & murdered Srinivas. Then, the shooter went to another local bar & bragged that he had shot an immigrant. // On that day, I was pregnant & moving into my third trimester.” Each poem in this particular sequence, save the first, opens with the same line, “When I read the news / of the shooting,” allowing each section to further document and examine the trauma of that particular moment by returning to it, and allowing it as a repeated jumping-off point. Structurally, one might see this poem in comparison to John Newlove’s classic 1960s-era poem “Ride Off Any Horizon,” which explored aspects of history from the Canadian prairies, as the second poem in Victor’s sequence reads:

When I read the news
of the shooting, this belly
plumed into an apse— it distended
upward, a balloon hollow
but leaden, these lungs lifted
here— this diaphragm fled, bore through
a tent made of ligament
& rope. The billow screeched
In these ears, pulled here— these legs apart
these toes went numb & cold. The ground
beneath me collapsed, turned to dunes
& the sand quickened. Here— this belly
carrying those pounds of flesh
began to take flight
in seconds it was
in— here— this mouth, pressing against here— these teeth—
a pear balloon, hot flush
with wet wings beating, with wet wings thrashing
in these lungs. The breath
an ocean of blood. This skin
here— a dam, detonating. A pulse, here
pulling history
towards these feet.