Your poor protagonist, face up
to watch the meteor shower symbolically
arcing across the August sky.
She never really had a chance.

You are used to writing novels,
to placing a human in the middle
of a slowly unwinding nighttime dilemma,
darkness hiding her indecisive, rock-heavy feet.

Your psychologist would say, You write
the choices you’re afraid to make. The women
in your books are bad mothers. They leave
their children, sit with regret in their lap

as if it were an overfed cat sharpening its claws
on the arm of the living room chair. They leave, rent
small apartments where silence is everywhere, like mould.
You have never. You would never. And yet. 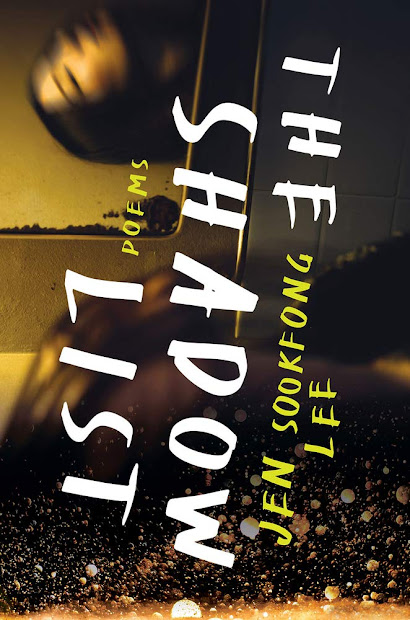 The author of five books of fiction and non-fiction, as well as four books for children, Vancouver writer Jen Sookfong Lee’s full-length poetry debut is The Shadow List (Hamilton ON: Buckrider Books/Wolsak and Wynn, 2021). There are far fewer examples of writers effectively moving from novels into poetry I can point to than examples of those working in the other direction (although Robert Kroetsch would be an example). I don’t even want to think about the times I’ve seen poetry titles by fiction writers that appear as little more than examples of prose broken into arbitrary line-breaks, but Lee clearly understands the form she’s working in, perhaps far better than many who claim such as their preferred form of composition.

The Shadow List is an assemblage of raw, first-person lyric narratives that explore the complications of human interaction, pop culture and anxiety, from parents, parenting, texting and dating to teenaged diary entries, Harry Styles, sleepless nights and traumas, past and present. She writes very much in a confessional mode, one that interplays dark thoughts with humour and pop culture. One could say that her work exists with a clear affinity to work by others in her immediate vicinity, including Dina Del Bucchia and Daniel Zomparelli, her current and former co-hosts of the Canadian literature podcast Can’t Lit. Lee’s poetry is unafraid of exploring any aspects of anger, sadness, fear or regret, as the opening sequence, “INTRODUCTION,” offers from the offset: “This is what you’ll need to understand: // Cameron Crowe is to blame for everything. / Sunshine is an insult. / You may never learn to swim but so what? / A dog is the love of your life. / The pretty poems are dead inside.”

Lee’s poems explore how life is lived, and even negotiated, on a very immediate level. “Lining the sidewalk,” she writes, to end the short poem “COMMUNITY GARDEN,” “invasive / creeping charlie and not / your mother complimenting / your ex-husband’s new wife.” Later on, in the poem “YESTERDAY, YOU HAD THE BEST / OF INTENTIONS,” she writes: “There are secrets, indecent and jagged like a stranger’s teeth / biting the thin line of your clavicle. You could whisper / them now and he would not hear you. But no. / You should wait. Nighttime lulls. That soft, enabling dark.” She writes of hopes and shadows, muscle memory, intimacy and frustration, and possibilities that might not always be possible. “The hurt will fuck you up,” she writes, to end the opening sequence, “but you will appear fine and this, / above all else, is your gift.” What is interesting is in the realization that Lee’s poems don’t necessarily exist to fully exorcise dark content, but, sometimes, as repeated loops; the goal of writing out such dark thoughts isn’t to remove them from play but to set them into the light. This is one step in a sequence, not an end. Either way, debut or not, this is a compelling collection, one that explores realms so often presented as unseemly or unfitting of contemplation, let alone as the property of exploration through poetry. As she responds in a recent interview with Rob Taylor for Canadian Notes and Queries:

I always think of these poems as being secrets, the ugly thoughts and unspoken desires we give space to in our heads when we are awake in the night. I learned very young that good Chinese girls didn’t ever allow those wants to be spoken, and it was only alone, when everyone else was asleep, that I let my brain circle around the thoughts that I felt were shameful. In a way, The Shadow List is a tribute to those moments when sex or drama or visceral things were what your body ached for, even if they were never allowed to see the light of day.