say you missed it

about who won all the awards who should’ve won them

tug at my bra strap and say 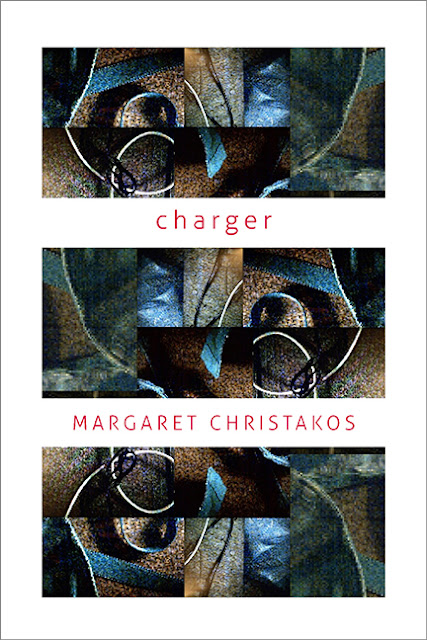 “passing on information // something has to happen // for something to occur in memory // for something to touch my insides,” Toronto poet Margaret Christakos writes to open her self-described “poem cycle” or poem suite, charger (Vancouver BC: Talonbooks, 2020). charger is set in a dozen short sections—“passing on information,” “what you are is fully charged,” “go to binary categories,” “what we had to cover,” “can i cease and desist,” “woke up thinking about laudanum,” “among poplars i am looking,” “if you are about to die,” “beyond the windowed rectangles,” “if it takes alive sperm,” “the thing that slides over” and “it’s like a solar-powered lawnmower”—with a coda, “the blue day is violent.” The lyric cycle charger is built as a cascade, even a pulse, of fragments that ebb and flow across the page to write on connection and disconnect examining virtual means verses prior means of human connection and conversation, privacies during a world lived predominantly through often multiple levels of social media, and personhood via reproductive rights. “you are              is          fully charged,” she writes, in the second of the book’s cycles.

In charger, her lyric staccato is stretched out, pulled apart and allowed the space to breathe, unlike the block of some of the same text at the end of her previous collection, Space Between Her Lips: The Poetry of Margaret Christakos (Wilfrid Laurier University Press, 2017) [see my review of such here], (which might have been as much of a spacing decision as anything else). The effect the block of text provides, in comparison, is more of a continuous rush, whereas the pulled-apart spacing appears more meditative, disjointed. The shift between the two versions is interesting, as this prior version, the poem “Charger,” begins:

Passing on information does not make us remember it. Something has to happen inside the organism for memory to occur. For something to occur in memory the skin is a membrane. For something to touch my insides I have to involve it in movement. Information moves when it seeps through time and becomes material. Memory occurs in the dwell of the repercussion. Feel free to argue. Feel free to get stuck in/ on/ over this. Feel free to make a big deal of this. Go ahead and make a mountain of this molehill.

Throughout charger, hers is a through-line both sustained and constantly interrupted, a staccato of reaching and reaching out, disconnecting even as she attempts to connect. And yet, she makes connections—multiple connections—between herself and the world. “unsplicing                   the      act                    and // about // as      if /// always                refilling // bulbous                        glass  aglow // milk       or // or // blood [.]” (“if it takes alive sperm”). What has been interesting about the shifts in her lyric, and her narratives, over the past few collections has been the stretching out of her focus, from earlier collections that wrote on the intimacy of mothering and children and the immediacies of those concerns to a wider scope of reaching out, articulating the ways in which we connect or attempt to. The intimacies of her approach continue, but across the spectrum of social media and how that alters the ways in which connections are made, seeking out the point where human considerations might concurrently scatter, fractal and meet. At the end of his introduction to her critical selected, editor and critic Gregory Betts writes:

Christakos’ work continues to open up language in new ways and with new forms. She explores social media as a space of self-constitution in public (as in public language), and uses its presumptions to probe the limits of access. Her #touchingseries, for instance, is a series of photos of her hand reaching out before the camera as if to touch something in the landscape (be that books, monuments, or screenshots of her own texts). The reaching evokes the desire for touch, the illusion of fulfilment, and the impossible dilemma of accessing the other through its representation. Thus, invoking, stirring, upsetting, and engaging the desire of instant knowledge, the literary industry, and the long neoliberal moment, the fear of grief, uncertainty, and death, but with a deeply felt consciousness of all the contradictions, the privileges, and the exlusions, Margaret Christakos writes.