Space Between Her Lips: The Poetry of Margaret Christakos, selected with an introduction by Gregory Betts

Of all the senses vision most informs us of separateness. As the bus moved around the traffic pylons and gripped onto the shallow hill my shoulder felt lighter, as if something drew it upward. (The white line I draw around you likens me to the moon.) But tonight the moon is pale bronze like translucent veteran skin with scars traced under a bright veil. These greyish-brown subtle shapes seem to move across its surface. Light thickens up along the whole contour, regardless of the variegated inner plane. When the rocks cluster between our bus and the moon the marrow-coloured cairn of elms and birch glows with a similar, less radiant bronze; or the view is represented as strata of differing densities. The impermeable rockface. Spires and filigree confections of thin foliage, a frost-grey passage. The uneven oblong of ash dotted by ragged, tunnel-like driftwood. A gouache, graded sky made the machinery of blueness like a beetle’s mobile back. Through the double paned winterized bus pieces of this water landscape are pigeoned in the cleft of plush seats; and motel lightboards hang with dangling roots and piecemeal, abandoned nests. The tissue of my hand doubles, but I feel the one and accept the suggestion of the other, both equally instrumental in future sleights of vision.

At Barrie, the moon has two arms, like a compass, each scratched into by patterns of ensiform, parenthetical gauges, like the goons, the hangers-on, the ones made certain by the courage of strangers.

January 8 (“from The Cool Window”)

The latest in the “Laurier Poetry Series” is Space Between Her Lips: The Poetry of Margaret Christakos, selected with an introduction by Gregory Betts (Waterloo ON: Wilfrid Laurier University Press, 2017). I’ve long considered that there hasn’t been nearly enough attention paid to Christakos’ ongoing work, so am thrilled to see both this collection, and Betts’ lengthy and informative introduction:

My ambition for Space Between Her Lips is to bring out the formal diversity of Christakos’s poetic talent, especially her adroit combination of experimental and lyrical tendencies. She makes an art of political intervention, explores themes of space, time, and identity, and yet still takes great pleasure in the sound and feel of words in the mouth. Her career-length exploration of themes of self-discovery, hetero-, queer, and bi-sexualities, motherhood, self-care, and a feeling of language’s limitations forms a strong orientation for the choice of what is included in this volume. Indeed, Margaret Christakos is a whole-body poet, writing about the world while maintaining an awareness of the materiality of language. Her writing embodies the subject of her writing, sometimes struggling against the limitations of language to articulate forbidden topics. Language becomes something like the hard, chipped rock of the north as she works against conventions to talk about the truth and grit of women’s contemporary experience. Sometimes the language crumbles into dust. She seeks to connect her body with her mother’s and other women’s by using language as the point of access to the generations before and after her. 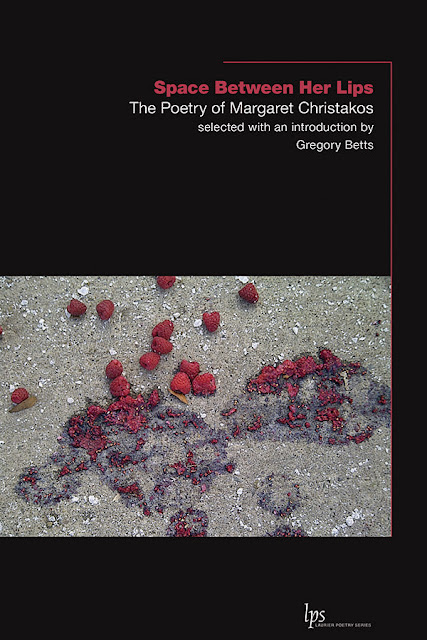 In his introduction, editor Betts lists a series of threads that have existed throughout Christakos’ published body of work, writing that while her first collection “explores the intersection of prose and poetry, and the movement of a body in a landscape, her works since then have increasingly included puns, anagrams, reversals, permutations, neologisms, found texts, digital meditations, and other fragmenting methods that depict the swift movement of language in the world and on her page.” Perhaps it is worth noting that Christakos has, through her seemingly uninterrupted writing and publishing activity since the 1980s, been a rare Toronto linkage between experimental Canadian writing in the 1970s and 1980s and the more recent explosion of experimental writing over the past two decades. Through Christakos, one can see echoes of the play (joyously so) and syntax of bpNichol, who one of her early writing teachers and mentors, as well as echoes of the writing on politics and the body of Nicole Brossard (the list goes on), all of which Betts explores and discusses at length. Christakos’ work has always managed a joyousness to it, even through a deeply critical gaze; playing and pausing and pushing, always, the possibility of what writing should be about, and how writing should even be approached, from the large canvases upon which she works, and the precision upon which she holds and places each individual word.

from My Attaché Case

All five chairs are neatly
Placed we concede in unison
It’s coming on just now. Still,

All five chairs so neatly
Placed at this square table
For we prefer real order.

Part of what I find fascinating about this series of critical selected poetry titles is in the way that even a seemingly-condensed selection of a particular poet’s work is allowed the ability to both introduce the subject and their work to a new audience, and open a further and deeper comprehension to readers long familiar with that poet’s ongoing work, and Christakos is far and away a poet deserving both a wider and deeper attention. As the acknowledgements near the back of the selected attests, Christakos’ ten trade collections are “sampled” for this selection, from Not Egypt (Coach House Press, 1989), The Moment Coming (ECW Press, 1998) and Excessive Love Prostheses (Coach House Books, 2002) to more recent works, including Welling (Your Scrivener Press, 2010), Multitudes (Coach House Books, 2013) and Her Paraphernalia: On Motherlines, Sex/Blood/Loss & Selfies (BookThug, 2016) [see my review of such here], showcasing her sustained attentions on language and the body, motherhood and polis, all of which she has approached with an incredible openness, a surprising vulnerability and steely fearlessness. In her “Afterword” to the collection, Christakos begins:

Above all, I find, writing is inefficient. It doesn’t get done with itself, nor I with it. It calls out and wants a change. It suggests how it is falling down, like a porch pillar that nobody inspected soon enough to fix. I certainly did not fix the pillar soon enough. Is it because I like old and deteriorating structures? Writing has the word it in its middle, and the word in. A thing, a place, a motion of thing and place. It begins silently with a prank letter who wants to be seen but not heard. Writing ends like glue, sealing sound into its back-of-mouth suckle. Is suckle the best word there? I can get stuck on this. Writing is a relative figure who drives into my spine the ache of its toll on me and then wrings me up for a movie. Who, not that. Writing sisters me.

I don’t dispense with my subject matter and around again it comes to writing. Can you be a little more technical about this? Writing takes all the same thoughts and anagrams them. That’s not very technical. Writing is not so much selective as generative. Writing involves the hands and revolves my thinking. Are you trying to get back around it its efficiency rating? It is inefficient.