I will not sit in your presence, persecutors. Bare-headed
before you I stand examined, men of English church, men of
holy cloth, but I was a seamstress, snipping lives in my fingers.

I could rip a seam like the ocean, which I aim to cross, leading
my women and men, who sweat alike and walk together, for only
by the sameness of men and women shall either be redeemed.

When I shudder, you will say the fit is on me, and mock me,
but I say you are filth, to see filth. I shake with the Word, myself
Mother Ann, female form of Christ. My babies dead, my womb

blasted, God knew I was for other offers. Not for me
the spindle, the bed. Shake your heads, churchmen. I see
you titter as the rabble does. Do not touch me. I will burn

your hands with holiness. Ask me any point of theology
and I will answer you in tongues. Cut mine out, I will speak.
I will inherit. I will turn the world upside down. 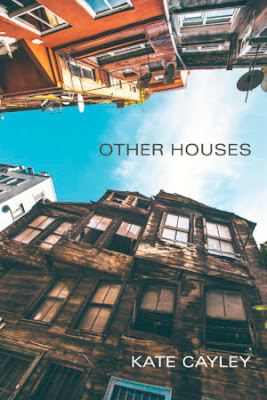 I am intrigued by the narrative precision of Kate Cayley’s lyrics in her second collection, Other Houses (London ON: Brick Books, 2017). I was initially struck by a series of poems that thread through, each titled “A Partial List of People Who Have Claimed to be Christ.” Four poems in all, each poem writes a kind of case history on different historical figures who claimed, in their own way, some version of the divine: Ann Lee (1736-1784), Arnold Potter (1804-1872), William W. Davies (1833-1906) and Laszlo Toth (1938-2012). There is something quite sympathetic in her sketches-as-case-histories, blending elements of irrationality with their own relationships and awareness of the divine, as she writes in the William W. Davies piece, “Everything comes // again, and what is, was.” Cayley’s lines are incredibly precise, pointed and sharp, carving metaphysical queries into character studies, and short sketches that encapsulate the entirety of human history. Utilizing historical research and figures, Cayley’s short narratives write out an exploration of fissures, breaks and even collisions between mythologies and reality, searching throughout the past few centuries for examples of those who broke through to the other side, or were broken in their attempts, and even, occasionally, both. As she writes in the poem “Hans Christian Anderson Becomes Acquainted with / His Shadow”: “There must be a light / somewhere.”

This map is unfinished.

There are no people on the map. Maps are adept at inferring that the people who inhabit a land matter less than the map itself, and so the map aids in the project of disappearance.

It is not known how this map is connected to the disappearance of a specific person, but as the map must have had an owner, we may assume a missing person (or missing people) that the map does not indicate.

There are tooth marks in the map, which may have come from an animal, or, possibly, indicate the cartographer’s foolish wish to eat the world. The attempt was unsuccessful. (“The Library of the Missing”)