If one stood perfectly still. Even in the withering hours

of then. Hair down to here. Being alive and quiet.

One could forget oneself. Forget what one didn’t even recognize.

How mad it felt. Subliminally. One could pick out goldfinches

and mourning cloaks among the dying stalks of cosmos,

and across the ditch of grey wastewater they use to irrigate

the burial ground, a young man in a late-flowering tree 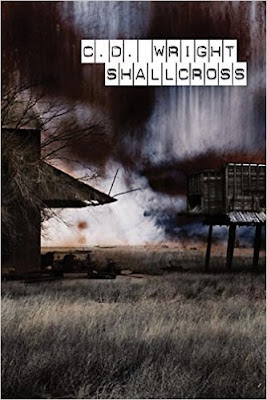 The most recent collection by the late American poet C.D. Wright (1949-2016) is ShallCross (Port Townsend WA: Copper Canyon Press, 2017), a book she finished editing just before her unexpected death, early last year. With such a book comes an enormous amount of mixed feelings: delight at the possibility of another volume by a beloved poet, and the reminder of just what it is we have lost. The strengths of this collection include what have always stood out in her work: the ability to articulate the most intimate of moments, recording and acknowledging deeply personal stories of human grief and suffering, and turning expectation and language around in the simplest ways, including details such as capturing how “a piano is being moved / by someone not listening / to the rain from one end / of the room to another” (“Poem with a Missing Pilot”) to “A study concluded, for a park / to be successful there had to be a woman. / The man next to the monument must have broken / away from her. Perhaps years / before.” (“Obscurity and Elegance”) to the openings of “Imaginary Suitcase,” that writes: “This belonged to your mother. Now / it is yours though you have no memory / of her and we’ll never know if she wrote it / by herself or copied it down from a book.” The poems and sections of the collection exist in a collage of what Wright did best in her work: allowing her empathy and attention to articulate the heart of what is so often overlooked or taken for granted, writing a series of poems for all the senses, writing: “Whether or not the water was freezing. The body / would break its sheath. Without layer on layer / of feather and air to insulate the loving belly.” (“Imagining Morning Glory”).

The longer poem, “Breathtaken,” extends the elegiac nature of her previous works with the photographer Deborah Luster, “as a corollary to” her Tooth for an Eye: A Chorography of Violence in Orleans Parish.” Through this sequence, as with her previous collaboration with Luster, One Big Self, Wright articulates a series of acknowledgments, recording those who have lost and have been lost through homicide, writing: “[Fabulous, that was her byword] // inside a black Toyota Scion // inside her ransacked house // inside Happy Jack Social and Pleasure Club // lying on the street [.]” Writing out a sequence less one about giving voice than allowing voice, allowing for a particular level of questions and an open grief: