12 or 20 questions with Annik Adey-Babinski 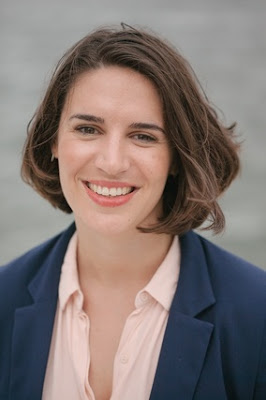 Annik Adey-Babinski [photo credit: Gesi Schilling, courtesy of Jai-Alai Books] grew up in Ottawa, Canada. She has received fellowships from the Banff Center and The Jonh S. and James L. Knight Foundation. Her poetry has appeared in Forklift, Ohio, Prelude, and the Best New Poets series. Her poems were also published in the Jai-Alai Books anthology Eight Miami Poets. Her first book of poetry, OKAY COOL NO SMOKING LOVE PONY, appeared recently with The Word Works. She is a technical writer in Miami, Florida.

1 - How did your first book change your life? How does your most recent work compare to your previous? How does it feel different?
Okay Cool No Smoking Love Pony is my first book, and it took 30 years to write. The poems I am writing since I finished it are few and far between, but I feel that they have a certain voice that is similar to the poems that are really working in Okay Pony. The more recent poems might be different in that after I left my MFA program I didn't write at all for about a year and a half, and now the weekly rigor I had in that program has not returned. So the poems are less frequent but possibly better simply due to the work I put in in those three years.

2 - How did you come to poetry first, as opposed to, say, fiction or non-fiction?
I was always interested in all three forms, but I think I decided to run with poetry when I was in university. I'd written a short story for a workshop and learned from the workshop leader that I didn't have a plot. It was very helpful because I was big into conveying mood and didn't think a story needed a plot. (I've since changed my mind!) So I decided to jump into poetryland where I thought mood and feeling governed everything, and sense-making was not necessary. Again, I've actually changed my stance on that since, but it's what brought me to poetry in a more serious way.

3 - How long does it take to start any particular writing project? Does your writing initially come quickly, or is it a slow process? Do first drafts appear looking close to their final shape, or does your work come out of copious notes?
It's a bit of a combination. Sometimes, and I love when this happens, I will feel moved to write a poem, sit down, and it will emerge without too much effort on my part, pretty much complete. This is mostly how I write today since I have not been disciplined. However, I think that a lot of good poems come from showing up everyday when you have a practice of writing regularly, turning out a lot of bad material, and then shaping the gems into poems. I really enjoy the editing process. It's always like a painting, though, sometimes you can go too far and the poem is forever marred by being overworked.

4 - Where does a poem usually begin for you? Are you an author of short pieces that end up combining into a larger project, or are you working on a "book" from the very beginning?
I don't usually have writing projects. I do try to use projects every now and then to get myself writing, but they usually fall through. I am much more of a poem-by-poem writer. Luckily, these usually resemble each other in tone or theme since they are written around the same time. They manage to arrange themselves into a cohesive book with a little prodding.

5 - Are public readings part of or counter to your creative process? Are you the sort of writer who enjoys doing readings?
I really like reading my poems for people who are interested. It is never fun to force your poems on someone who is unwilling to be slightly bored and bemused for 15 minutes, but maybe it's like making sure you put flax in your oatmeal. It's good for you, even if it's annoying! I do think it helps to read a new poem that I feel is done to a crowd. If I get embarrassed or skip a few lines I know I need to edit more.

6 - Do you have any theoretical concerns behind your writing? What kinds of questions are you trying to answer with your work? What do you even think the current questions are?
I don't usually sit down to write with theory in mind. Form and content is more what I focus on.

10 - What kind of writing routine do you tend to keep, or do you even have one? How does a typical day (for you) begin?
At the moment, I do not keep a writing routine. I tried waking up at 5 am but soon grew very tired and could not keep it up. I usually wake up at 6 am to be at work for 7:30, so I do not have that much morning to work with!

11 - When your writing gets stalled, where do you turn or return for (for lack of a better word) inspiration?
I always like to read the poems written by New York Public School students under Kenneth Koch's tutelage. He recorded them in his book, Rose, Where Did You Get That Red? and I find them very inspiring. I also return to Matthew Dickman's work when I need a jumpstart.

12 - What fragrance reminds you of home?
Spring mud!

13 - David W. McFadden once said that books come from books, but are there any other forms that influence your work, whether nature, music, science or visual art?
I love watching TV and movies and I find they influence me a great deal. I also have a lot of poems in Okay Pony written after visual art and music.

16 - If you could pick any other occupation to attempt, what would it be? Or, alternately, what do you think you would have ended up doing had you not been a writer?
I would love to be a real estate tycoon.

19 - What are you currently working on?
I am trying to write non-fiction memoir essays. It is new for me and I have a lot of work to do if I want them to be any good!

Posted by rob mclennan at 8:31 AM
Labels: 12 or 20 questions, Annik Adey-Babinski, Jai-Alai Books, The Word Works