Early European narratives of exploration and contact with the ‘New World’ often intertwine the languages of scientific discovery and colonialism and bring along with them all the attendant European concerns of race, commercial exploitation, and male domination over muted landscapes and the peoples who inhabited them. In writing and researching Dead White Men, I was interested in looking to these past stories (especially those focused on North America and the South Pacific), not to add to the fictions of past white heroism but to better understand the problematic relationship between the stories, the mythologies they have become, and the lands and peoples they describe. For many settlers, our understanding of the history of the land upon which we live is often limited to the names that have been given to it by past white explorers and the mythologies we have built up around exploration and discovery. I wanted to use poetry to interrogate this past and the texts upon which it rests. 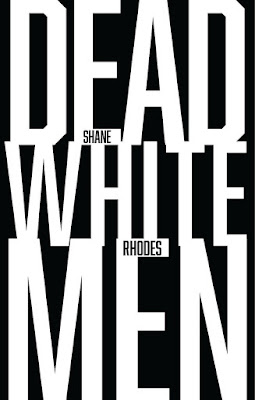 Some of Ottawa poet Shane Rhodes’ most compelling work, and much of his focus over the past few years, has been in utilizing the words of others—rearranging and shifting context—and he continues that exploration through Dead White Men (Toronto ON: Coach House Books, 2017), a book that delves into “exploration and scientific texts from the fifteenth to the nineteenth centuries – texts wrapped up in the history and ongoing present of colonization [.]” There is something fascinating about how Rhodes and Nisga’a writer Jordan Abel are, from their separate vantage points and backgrounds, both exploring and reworking texts of the colonizer, engaged in the acknowledgment and exploration of erased and overwritten Aboriginal histories and presences in Canada through European exploration and settlement. Dead White Men also furthers the archival work he began through his previous collection, X (Nightwood Editions, 2013), a collection that reworked and responded to “each of the eleven numbered treaties (the Post Confederation Treaties between many of Canada’s First Nations and the Queen of England).”

I’m fascinated by the stories our culture tells itself and the ones it chooses to forget and how these processes of amnesia and myth making can be traced through historical documents. There is no better way to engage with the past and look at how it continues to shape our present than through the use, reuse, and repurposing of archival material. In this, I also want to look at how I can push conceptual and experimental writing techniques beyond just neat ideas to actually serve a broader purpose of social justice and decolonization.

Q: Your first two poetry collections, in comparison, are composed utilizing a far more straightforward lyric. With your more recent work engaged in more “conceptual and experimental writing techniques,” is the more lyric poem something you’ve set aside for now, or something you’ve outgrown? Has the conceptual framework always been present?

A: I’ve never really seen my more conceptual work as being that different from my lyrical work. In the end, they are both working the same veins and interests. However, I find the conceptual techniques I am currently using—like found poetry—make ethical and moral sense for the subjects I want to investigate. How else can a white man write about colonization and the systematic racism and anti-indigenousness it perpetuates than by sampling the documents our culture has created and continues to create to forward the colonial enterprise? As an artist, it seems limiting to me to just write or create in the same way all the time when we have all these other techniques at our disposal.

There is something interesting, as well, in the fact of a writer of European descent openly exploring and critiquing settler texts, and through such, the foundational myths and self-justifications that made European settlement possible. By shifting and repurposing the context of some of these archival materials, Rhodes deliberately highlights elements that might have otherwise been overlooked, and his explorations throughout the collection move from the lyric to the fragment to entire prose sections, in turns tweaked and selected and reproduced whole. Moving away from the purposes of the original, he crafts a series, even a collage, of highly critical lyric essays. As the first section of the four-part poem “Gold” reads:

For it is beaten and we are beaten for it:
crushed, mixed with mercury, stomped by foot.
Because of an uncharacterized glaciolacustrine unit
and an over-steepening of the downstream slope,
failure of the Mount Polley tailings pond
was attributed to the passive voice. The longhole up
plunge, down dip, and at depth. An unlikely event
officials repeated upstream from the town of Likely
and the T’exelc and Xatsull reserves. Rare.
He saw, then, some of the Indians wore gold rings
and choice blue stones in their nostrils and ears.
Auriferous. Lustful as any cyanide destruction circuit.
A nug, a lump, a rough unshapen mass. Like my father
before me, I too am a competent Nozzelman
needed for heavy lifting in the mucking cycle,
performing pre- and post-blast functions by hand
at, thank god, $23/h. Child to the sun.
After the Indians and mules were dead,
the English brought in slaves from Angola.
Rich as Potosi. The toxins were deadly
and certifiably organic. They held his feet
to flame until the marrow spurted and still,
for the life of him, he could not tell them
where they would find it.

Produced as a dos-à-dos (specifically, a tête-bêche), Dead White Men exists in two sections, the longest of which—composed of “what is history / a whitish story” and “this country of science my soul”—explores settler texts, while the shorter section—“transit”—focuses on, as Rhodes writes in the section’s note, “[…] on texts produced during the 1769 measurement of the transit of Venus. The transit – which was observed and recorded by over 170 observers at 77 posts around the world – was one of the most significant international scientific co-operations of its time. By measuring the movement of Venus across the Sun, accurate numbers could finally be calculated for the distance from the Earth to the Sun, the size of the solar system, and, more generally, our place in the heavens.” (although, admittedly, I’m not entirely clear on how the work of the one side of the collection fits into the other). As he writes: “Light / is now declared to be / of the highest importance /to the Royal Society [.]”

everything included light
I should explain more clearly
clearly and openly

What ever do you have to think
outside of the Sun?