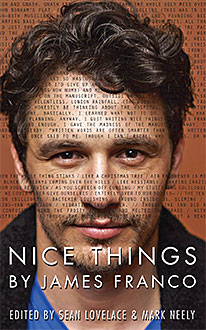 New Michigan Press is a publisher of chapbooks and broadsides (more the former than the latter), now 18 years old, and having published 67 or so titles so far.

Ander Monson: I'm the author of six books of fiction, nonfiction and poetry, most recently Letter to a Future Lover (Graywolf, 2015).

1 – When did New Michigan Press first start? How have your original goals as a publisher shifted since you started, if at all? And what have you learned through the process?
NMP started in 1999, when I was in grad school, more as a name to attach to some printing projects I was doing at the time. I was lamenting to one of my professors in grad school how I was having a hard time finding presses to publish the work I loved and wanted to read, and she said, well, why don't you start a press? So I did. It's grown a lot over its lifetime. Originally it was all offset-printed b/w saddle-stitched chapbooks, and we've moved way past that now. We still only do chapbooks and broadsides, and it's only one of several publishing projects I'm involved in, so I have to keep it in a smallish pot. We publish 3-9 titles a year + broadsides on a much more occasional basis.

2 – What first brought you to publishing?
NMP isn't my first publishing project; it was my first project of a press, certainly. I told that little anecdote above, but I'd already been working on several literary magazines for probably 3-4 years before NMP began. I guess I haven't really ever understood the gap that exists between writing and publishing to be that big of a gap. I think basically from the age of typewriting through word processing it's expanded, but from a ways back writers have often been printers or publishers or artists too. So it's excellent to see that writing/publishing gap shrinking dramatically in the last two decades.

3 – What do you consider the role and responsibilities, if any, of small publishing?
Treat writers well and their work well and collaborate with them in the process. Do what you can to get their work into the world in as beautiful and clear a way as possible. Don't get in the way.

4 – What do you see your press doing that no one else is?
One thing we've started doing--and this is something that I think other presses really ought to get on--is to follow the music industry/indie label model, which is to encourage readers/listeners to buy artifacts by also including a digital download. When I'm looking to buy a book or a record, I'll almost always find it on amazon, and then go to the press/label's site to see if I can't buy it from them for a price that's not too much more. If it's only, say, 25% more, after shipping, which is the case maybe 50% of the time, I'll buy it from them directly. As anyone knows, the press and author make much more money through direct sales. But often enough it'll cost almost twice the amount after shipping and handling, and I just won't do that. So we started offering an incentive to people buying NMP titles directly from us: buy from us and we have cheap shipping ($2) on almost everything, and if you buy from us directly you also get a free digital download included.

If that was the case with all the other presses and labels I wanted to buy things from I would probably never use amazon or its ilk again for books or music.

6 – How involved an editor are you? Do you dig deep into line edits, or do you prefer more of a light touch?
It depends a lot on the project. We publish poetry more often than prose, and treat almost everything we do as poetry, meaning that I assume that the writer's intentions re form and the micro especially have probably manifested themselves pretty well on the page by the time we take a book on. Usually it's more a question of suggesting some edits or trims, a rearrangement perhaps or some edits as we're laying things out. Often I'll say that I'd love to see more of whatever they're doing. But some manuscripts are basically good to go.

7 – How do your books get distributed? What are your usual print runs?
Because a lot of what we do these days is digitally printed, we have distribution through Ingram / Baker & Taylor (and in fact in many countries) for most (but not all) of our titles. More often than not, though, most of our books sell directly from us or via the writers themselves, which is not atypical, I think, for smaller presses (especially ones specializing in shorter forms). We don't do "runs" anymore for most of our titles since they're all print-on-demand, which is a lot better model (if one with some downsides that we have to navigate). We used to print 500 at a shot, though most of our chapbooks wouldn't sell through that run.

8 – How many other people are involved with editing or production? Do you work with other editors, and if so, how effective do you find it? What are the benefits, drawbacks?
Most of the work is me, though we have a rotating staff of up to a dozen, especially helping out reading the chapbook contest MSS (which is how we acquire most of our manuscripts each year).

10– How do you approach the idea of publishing your own writing? Some, such as Gary Geddes when he still ran Cormorant, refused such, yet various Coach House Press’ editors had titles during their tenures as editors for the press, including Victor Coleman and bpNichol. What do you think of the arguments for or against, or do you see the whole question as irrelevant?
If it's good enough for Whitman, it's good enough for me. I think it's a problem when someone starts a press to publish their own work and that's all they do. I would never do that. But I don't see any problem with a writers, say, like Kelly Link, who with her husband started Small Beer Press to publish her work as well as the work of a whole lot of other likeminded writers who feel in the crack between "literary" and "genre." I mean, that's a labor of love, and an important one, and she's certainly one of the best writers they publish. But they didn't start it in order simply to publish her. Really I don't care very much. (But in some ways it does matter in terms of how others view your press, particularly in terms of grants and academia and so forth.) I've published 2 of my own chapbooks among the 67 we've published, which feels like an okay ratio, but  I also don't forefront my own work in any way. I'd rather spend my time on the other excellent work we publish, but sometimes I have a project that I figure fuck it, if no one else wants to take this on, then I will. So, for instance, NMP has done production on the limited edition of Letter to a Future Lover, which came unbound in a handmade box. My trade publisher Graywolf couldn't quite stomach that production project, so I took the limited edition on myself. If I didn't already have that platform and experience in production, I never would have had the thought to do it. This kind of answers the previous question too, since by virtue of having access to the tools to make books, I'm not at all interested as a writer in writing texts that can just be dumped into whatever media or format. When I send out a book manuscript it's a manuscript that knows it's a book and takes advantage of what books do better than other forms of packaged text.

11– How do you see New Michigan Press evolving?
Hard to say. Right now it's again in a pot that's limited in size based on its role in my life. It's not a paying job for me to do this (it's a loss-making job, as most of us know), so it will continue to go on at about this scale for a while, is my guess. I am starting to pick up more chapbook manuscripts outside of the contest system, though. This year we'll be publishing chapbooks by Craig Arnold (his last manuscript completed just before he disappeared, probably having fallen into a Japanese volcano), Albert Goldbarth, and Kathleen Peirce. These are all great manuscripts by people who I approached, and I'd like to be able to more of these kinds of projects in the future.

14– How does New Michigan Press work to engage with your immediate literary community, and community at large? What journals or presses do you see New Michigan Press in dialogue with? How important do you see those dialogues, those conversations?
Well, NMP technically publishes the magazine DIAGRAM <thediagram.com> that I also edit, and our chapbook contest is a joint one. So that's the most obvious by far. The other projects I'm involved in (esp Essay Daily, March Xness) are clearly related by bloodline and aesthetic to some extent. But we're also, I'd say, engaged with things like Octopus, Canary Books, Letter Machine Editions, Calamari Archive, Ugly Duckling, Spork, and a few others that I really admire.

15– Do you hold regular or occasional readings or launches? How important do you see public readings and other events?
Yes: I like to do them but don't usually have the time or bandwidth to do the logistics, so we do them when we have interesting people to collaborate with who like doing that work (like Drew Burk of Spork, for instance). We did a great event with Sonora Review to splash out our James Franco chapbook too last year.

18– Tell me about three of your most recent titles, and why they’re special.
I want to shout out this forthcoming Craig Arnold book in part because it's a series of essays or prose poems about volcanoes, which is obviously made much more resonant by his likely disappearance into one. He was a wonderful poet, and we're really excited about doing this last book of his right. That should come out in the fall.

Nice Things By James Franco is also one I like a lot. It consists of text by Franco edited (it's unclear how edited and from what and in what ways--it's like a black box between Franco or the idea of Franco and the reader) into poems and prose by Sean Lovelace and Mark Neely. It's a really funny and strange project and one that I think is certainly among Franco's best.

Last, I'll shout out Apocalypse How? by Adrienne Celt. Adrienne's an acquaintance here in Tucson and an excellent fiction writer, but she sent this weird fucking book of sharp existential comics about animals to the chapbook contest last year. I loved its craft and its wit, but it took me a while to get my head around it. It's also the first mostly-visual book we've done, and I think it's just excellent and bizarro all around.